Had to be up and out of the hotel room by 6.45am to catch the Victoria Clipper ferry to Victoria. The port wasn’t too far from our hotel, but way too far to walk with luggage so we had to catch a taxi. We figured we’d have to order 2 cabs but when Auntie Sue tried the night before they said they don’t take taxi orders. Luckily when we walked to the cab line outside the hotel was a minivan right at the front which meant we all squished in together for the ride – one way to save some money!

The line up at the terminal was long but moved quick and after we picked up our tickets and went through an id check we were herded in to a room to wait. For some reason we were in group 3 for getting on board the ferry so we had to wait until virtually everyone else got on board before we were allowed. By then there were no seats with tables so we had to sit in airport seats. We also weren’t allowed outside the boat before it left the dock, so I didn’t get any good pictures of Seattle as we left the harbor. A little disappointing to me since I was looking forward to that. 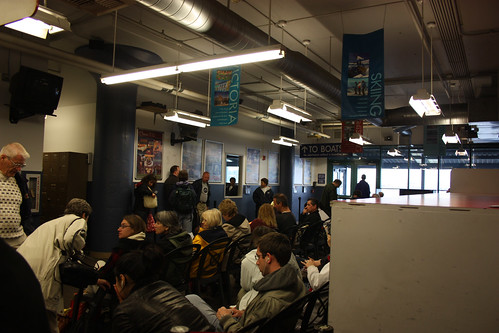 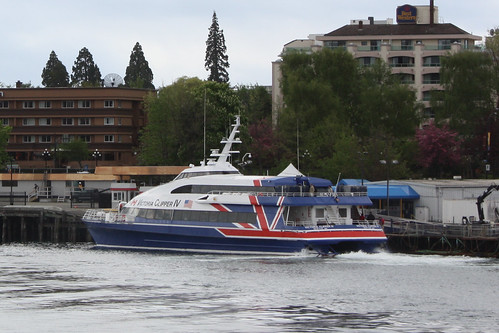 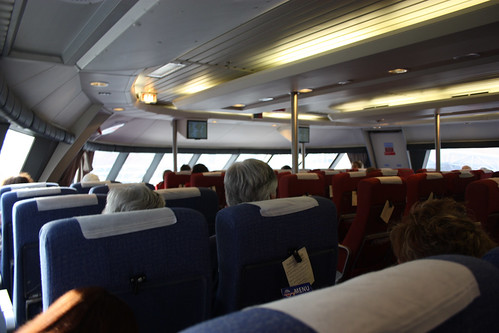 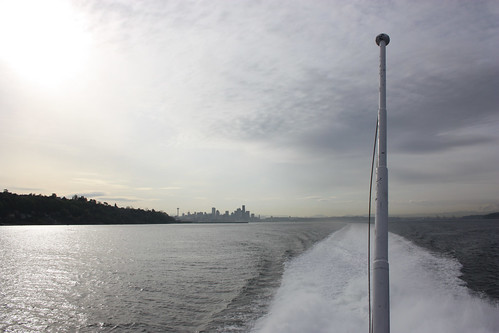 By now it was 8am and we all were hungry so bought some food from the canteen. Historically for me ferry food has always been awful and this was no different. Most of us got the danish basket which was a not very nice danish, some babybel cheese and crackers, apple sauce baby food and curious george fruit snacks. Plus unlimited coffee. You would think that being so close to the pike place markets that they would have access to better food than what they offered. Why do ferries always have shit food?

2.5 hours later we landed in Victoria Harbour and then waited outside in the cold to be processed for coming in to the country. They make you wait in an uncovered windy area if you are unlucky to get off the boat last for about an hour before you actually get in to the building which is another 30 minute line up. Mum was kind enough to give me her katmandu jacket but since I had a backpack on I put it on back the front. That of course called for some Kris Kross rapping from me which thankfully was appreciated by Fiona, the only person in our group who would have a clue what I was talking about. 🙂 I should have done it louder so that I can join the travelling performers that were also on the boat. Apparently the were a bunch of musicians with a group of circus type performers. Once we got to the front of the line to get through customs we had to answer a few easy questions and then we were out the door and in to Canada! 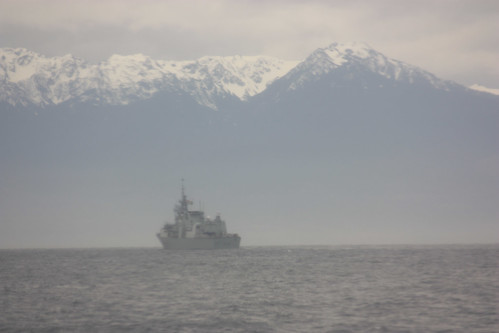 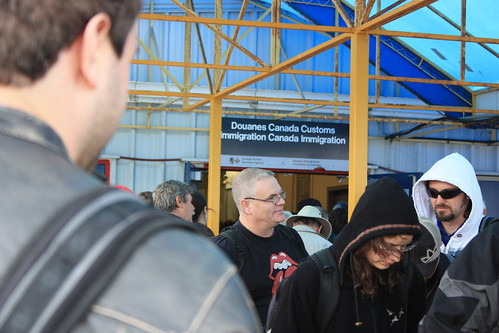 We were booked in at the Fairmont Empress which is just a short distance around the harbour from the ferry terminal. Pulling our big ass luggage behind us we admired the view of the hotel as well as the Legislative Assembly of British Columbia. The gardens of the Empress was beautiful but we had a few false starts trying to get in. Trying to go through the side entrance to the check in desk is not advised, so we ended up going through the front door like a normal person. 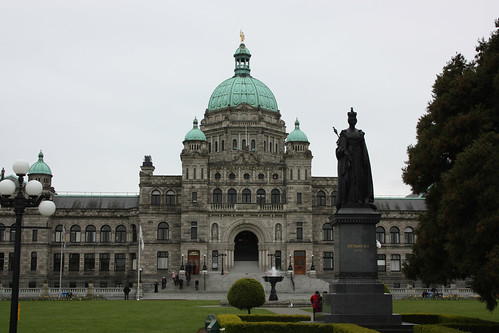 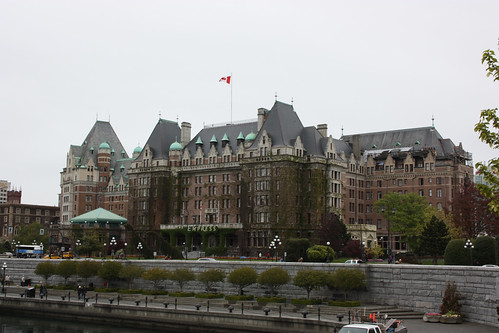 The Fairmont Empress is a well known icon of Victoria and you’ll most likely see it in all the tourist brochures for the city. It’s a symbol of the grand empire of England when it was in it’s heyday and is reminiscent of the type of buildings they also made in India. I had gotten a great rate for the room, so it was with some glee we checked in and went to our rooms. As expected with a deal like that we had no views of the harbour, but the high ceilings, huge walk in wardrobe and queen size beds made it easy to feel at home. No huge 42″ tv like the Fairmont in Boston though. It’s a beautiful historic hotel that indulges in afternoon teas in the verandah and we were impressed to see a jug in the room for making teas. After 20 days of making do without a teapot we felt so civilized to sit down and make ourselves a cup of tea and kick back in our lovely room with high ceilings. Maybe we felt at home cause there was a statue of Captain Cook out by the harbour. 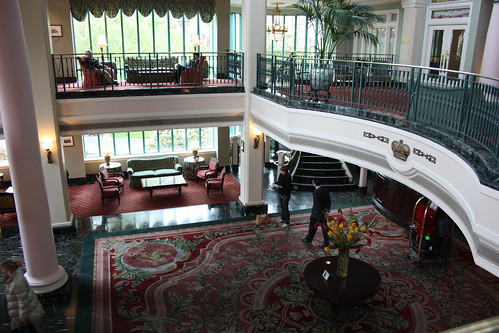 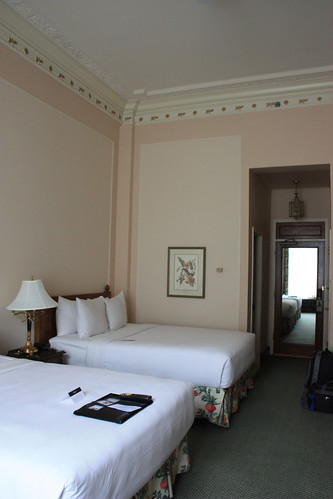 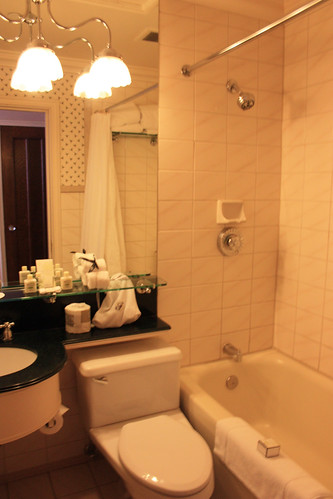 After a short break where we drank our teas we decided to head out, look at the town and then stop at the miniature village attractions. Out on the harbour we noticed a scooter hire place so Pauline and I excused ourselves from the others and investigated the costs. The scooter guy was on the phone when we arrived and after hovering around for about 15 minutes with no sign of him getting off or even being interested in us we said stuff you and left. It would have been great to see the town on a scooter even if it was cold, but alas it was not to be. Instead we wandered the streets looking at the souvenir shops, the bay centre shopping centre and bakeries. Pauline had a hankering for a sausage roll but these don’t seem to exist in either Canada or the USA so we were out of luck. Instead I ordered some chips from a fudge store in Market Square. I had forgotten that I didn’t have any canadian cash but thankfully they accept US dollars. The change was in canadian dollars so we had to spend that before we left the next day. Pauline was still hungry after the chips so we went in to the bay centre again and found an A&W burger franchise that had a really cheap mama burger. It was actually ok. We wandered slowly back to the hotel surprised that we never found Mum, Sue and Fiona. We decided to skip the Miniature Village when we discovered it was about $16CAD to get in, but Fiona, Sue and Mum went and really enjoyed it. Meanwhile Pauline and I were amusing ourselves in the room looking out the window at the fake owls on the roofs nearby. 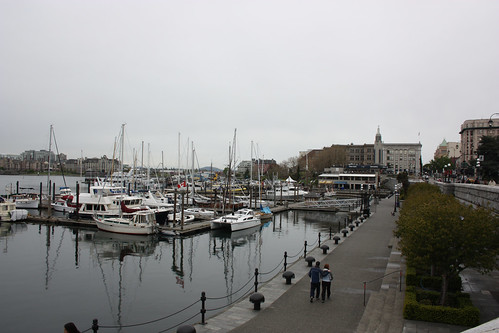 A Hop on Hop off bus in Victoria: 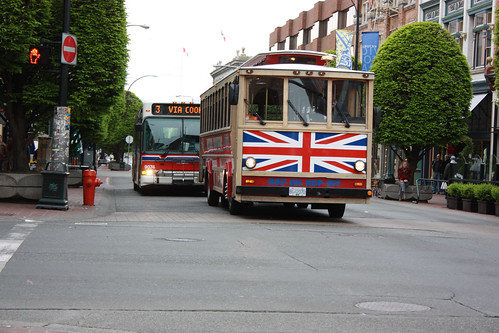 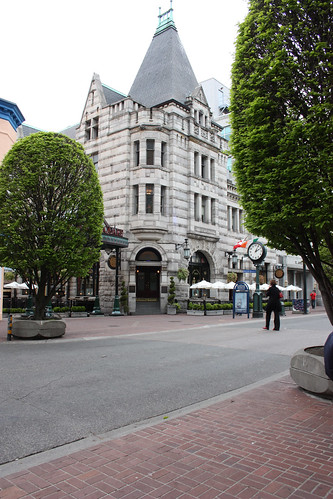 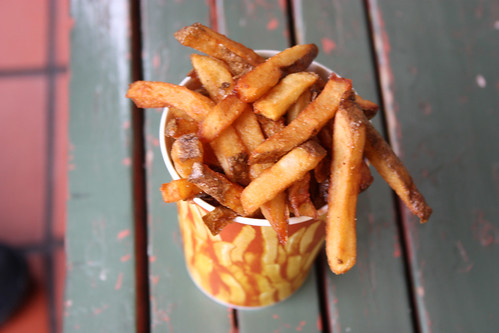 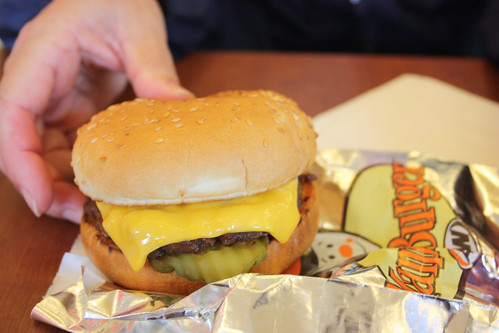 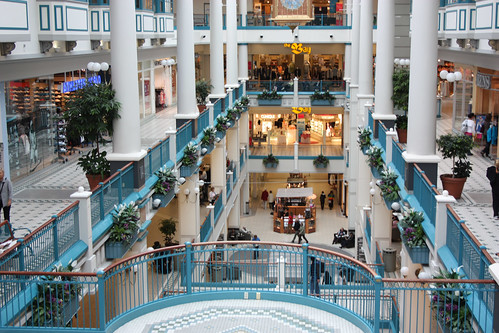 Fake Owl on the roof: 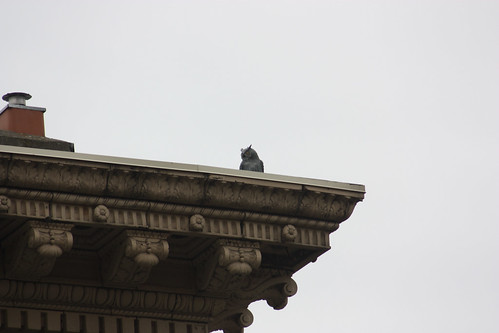 When we all met up back at the hotel we decided to have dinner at Pescatores Fish House an hour or so later which was across the road. Fiona and Sue had a bit of trouble finding it, so we went in first and got a booth. They make a mean cocktail that even Fiona enjoyed (not being much of a drinker) and it was especially good since they were on special. I had a luscious and wonderful halibut for dinner and we went all out on our meals, probably the best dinner we had on the whole trip – at least for me. Pauline had some oysters as well. We had great service and it was a cool ambience with a huge aquarium full of coral fish and even a puffer. After dinner we went back to the hotel since it was so cold, but Auntie Sue decided to venture out anyway. After seeing her photos of the Assembly building the next day all lit up I was annoyed that I couldn’t be arsed going out and doing it too. 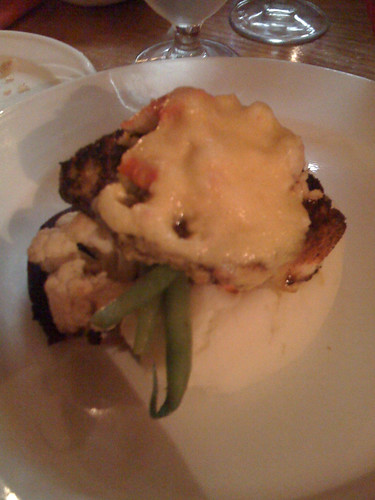 Victoria is only a few hours away from the USA by boat but feels like it should be in Europe. I don’t know if it is indicative of a true Canadian city but it is picturesque and cute. And civilized. 😉

Up early to catch a ferry to Victoria, British Columbia.
Leaving the USA for a day to go to Canada. Hope they let us back in.   http://twitpic.com/4jo30
Our room at the fairnont empress has a lovely high ceiling and an electric kettle but unfortunately no harbour view.
Waited 10 mins for the guy at Eco scooters to get off the phone and serve us but when he couldn’t even look at us we left. Would’ve been fun
Haven’t seen so many union jacks since we left Australia. Can tell I’m in British Columbia!
Victoria is definitely a picturesque harbour. No wonder captain cook liked it.