Watching the sun rise while in a bed underneath a guy isn’t something I can say has ever happened to me before but it happened just outside of Bangkok. To clarify, the guy was in a bunk bed above me on a train and it wasn’t the least romantic with the smell of some other guy’s BO next door. But it was an awesome experience to be up at 5am watching temples and tin houses fly past while a huge red sun rose behind them. 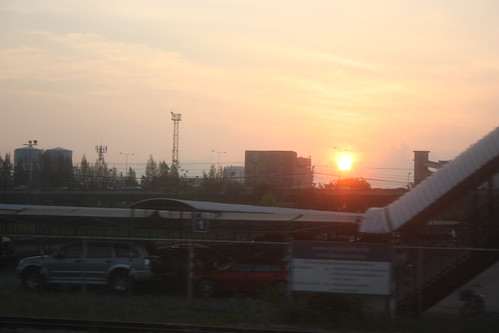 The sleep was really comfortable other than the pillow being as hard as a piece of cement and a few people talking. Oh and the toilets were pretty poor – they could at least replace the seat. It also arrived about 40 minutes late which they claim is common. I have to wonder though why you always see the worst parts of a city from the train line.

I headed off to the Metro to catch a train to the Sala Daeng BTS station. Trailing my bags behind me I thought I was screwed when I walked through the metal detectors at the station entrance but all he did was check my camera bag. Lots of shopping malls have the detectors too but the constant going off made me wonder what the point was. 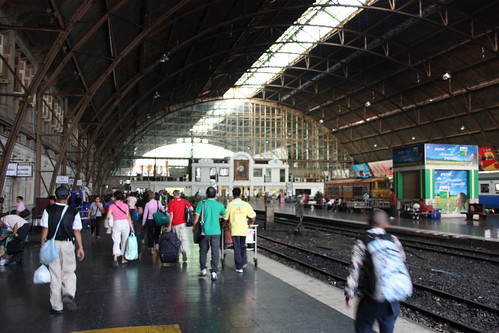 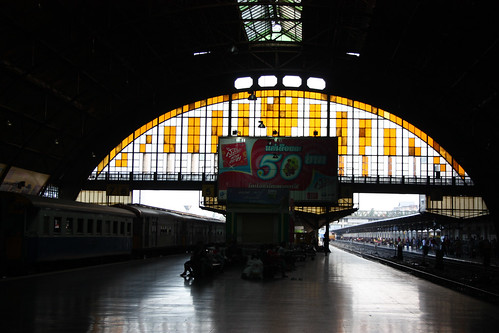 Managed to do the train transitions easily, the metro has a token that you tap to go through then put it in the slot to leave. Stupidly the metro and the bts don’t use the same payment system so you have to maintain two sets of cards if you are a frequent user.

Kind of lost my direction leaving the bts and ended up walking through a market to get to my hotel. After checking in I was taken to my room by the bag guy but it turned out to be someone elses! They weren’t in but their bag was. He gave me a choice of two other rooms but the winner was the no smoking one. Also got an upgrade to a deluxe room cause there were no superior rooms left. 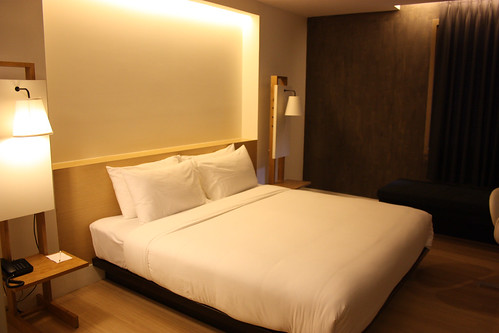 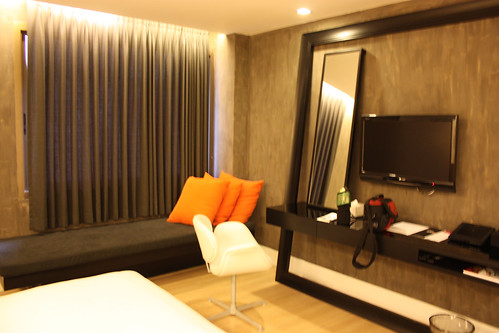 After admiring the last bit of luxury I’ll have for a few weeks I took a shower and nap to wash off the train and humid heat of the city. It surprised me how much it reminded me of Hong Kong in both heat and smell.

Looking for a bit of big city action and retail therapy I got back in the BTS and headed over to Silom Square. It has the highest concentration of sneakers stores in Bangkok, yet they all seemed to be shut at 1pm on a Monday afternoon. So many stores and malls in one spot and there was no way I could cover them all. Didn’t buy anything either. 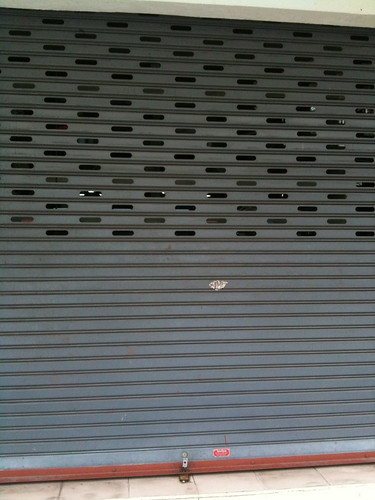 Energy lacking I figured since i was in the area I’d go see the Jim Thompson House Museum which I’d planned on going anyway. Thompson was an architect who fell in love with Thailand when he was stationed there in the war. He ended up helping the Thai people re-establish the dying silk weaving and sell it to the world. When he was 61 he went for a walk in the jungle in Malaysia on holidays and never came back.

His house was by the river and was a bunch of about 6 classic old high Thai houses – some he joined together. For 100 baht you get a 30 minute guided tour in english of his house which also gives you a good look at all the Thai artifacts he collected too. The tour even required you to take your shoes off too. Really great way to show a slice of Thai life as created by an outside admirer. Beautiful house. 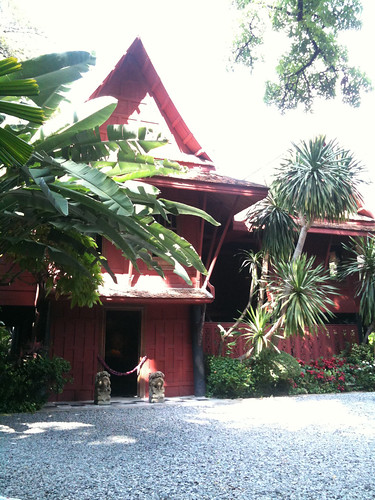 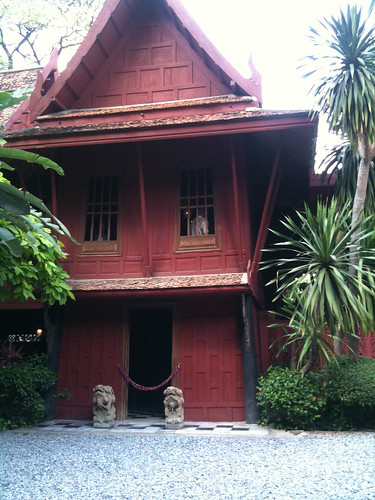 Headed back to the hotel for another shower and rest then out for some Patpong Nightlife. Patpong is the famouse redlight district of Bangkok but also has a night market. Mainly set up for tourists it was a bit boring to me so I breezed through it. Passed the ping pong bars as well. I had always thought I’d go to see the ping pong show but when I got there I was turned off by the fact that I was alone and it all looked sleazy. Plus I would be sleazy if I went in alone. I’d do it if I had someone to go with but I felt a little exposed by myself. 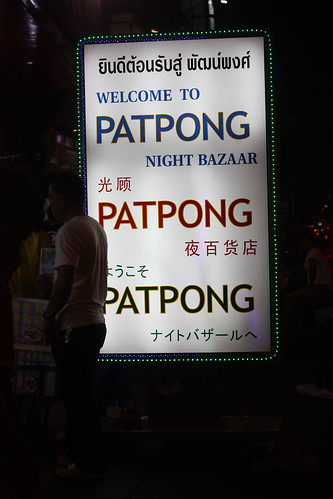 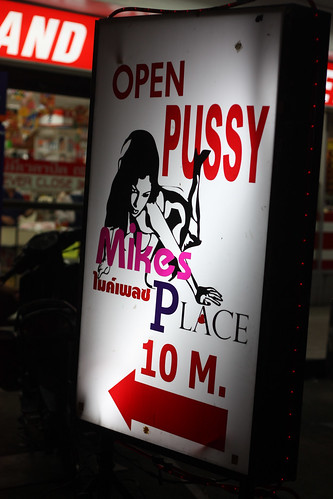 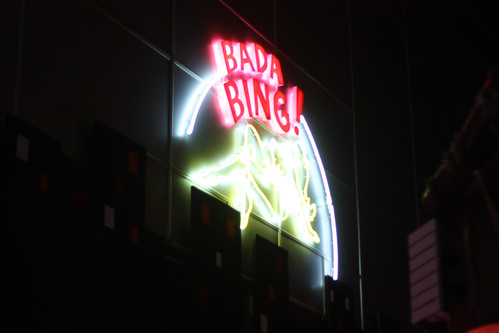 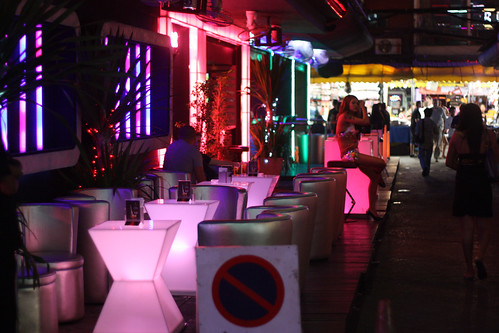 Found the gay man street which was next to it. There were waiters in bright neon yellow outfits and all the seats faced outwards like in France – I guess for better perving? Not much going on there so headed back to the hotel after my lame attempt at a night out. 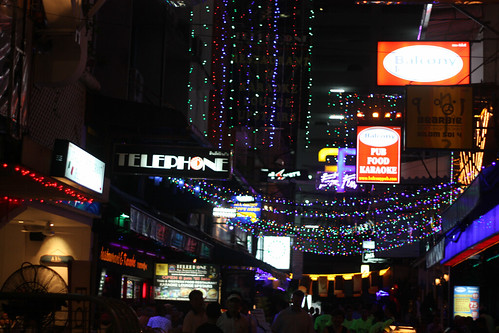