Really hard to motivate myself this morning. Slept in till 8 easily, then headed down to the hotel restaurant (called Foodie) for a buffet breakfast. Although tasty it wasn’t anything to rave over and I probably didn’t get great value out of it.

I’d put a sign on the door saying come back later while I went and had breakfast so that when I came back housecleaning wouldn’t be in there when I cam back to grab my stuff. I was accosted in the hallway on my return and she asked if I wanted my room cleaned. Stupidly I said yes which mean she did it then and there while I had to sit in the room, thereby instigating the very thing I’d been trying to avoid.

That’s the thing I don’t like about good hotels. The rooms are great, but everything costs more – what with the tipping, breakfast and even cab rides because they all think you are rich. They don’t know that you got a deal to stay there and are normally poving it. Everyone wants to help you so they can get paid and all I want is to be ignored and use my great room. I’m probably the exception though.

After picking up my camera and map I headed off to the BTS to go to central pier. The BTS skytrain is a great way to get around Bangkok although it doesn’t yet cover every tourist destination. The airport link was due to open in December but is still in trials. To get to my destinations today I would have to catch a boat. 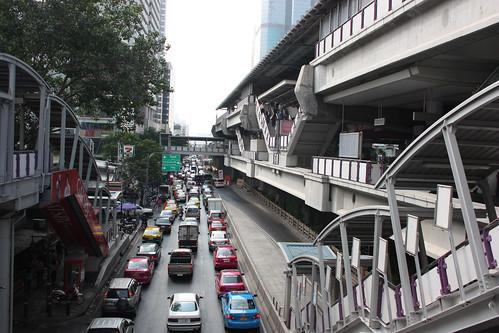 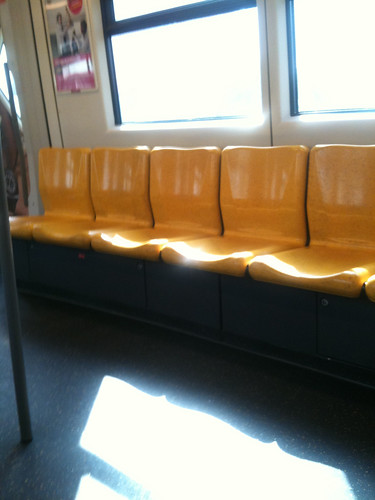 The central pier is connected directly to the BTS station so it was a matter of walking down the stairs, pass the dog asleep on the seats, buying a 150 baht day pass on the tourist boat and jumping on board the waiting boat. It was funny when I bought the ticket cause the last thing the lady said to me was “thankyou now get on board the boat” without a hint of humour or sarcasm. Yes ma’am! 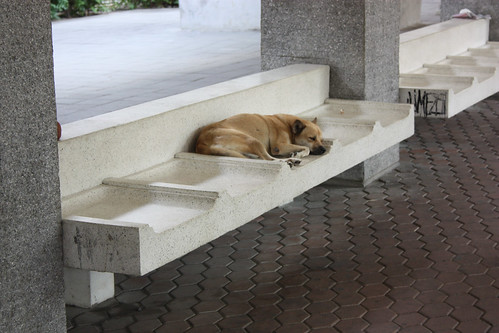 The boat had “tourist boat” written all over it just in case anyone was in any doubt that this wa for the tourists. It was relatively modern with plastic seats and lifejackets – certainly more comfortable then the squashed normal ferries. It took us down the Chao Praya River past sights like Wat Arun – there are about 8 ferry stops in all. 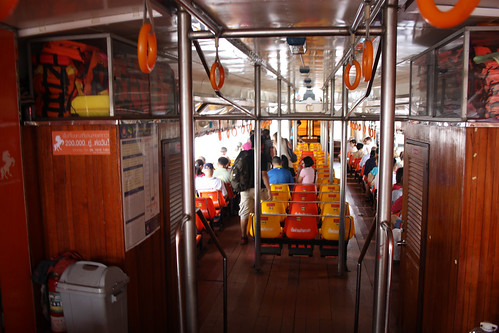 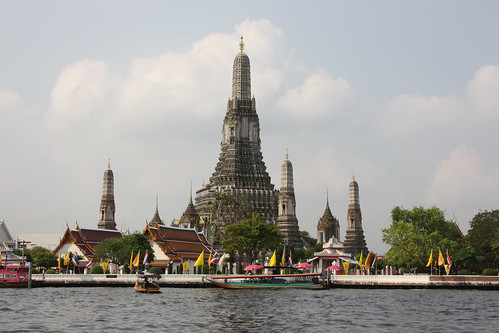 I got off at the Grand Palace pier to go see the Grand Palace (obviously). I had read about touts telling you the place was closed and all sorts of other scams but I didn’t get hit up by anyone. It cost a steep 350 baht to get in and I shelled out the extra 200 baht to do the audio tour. 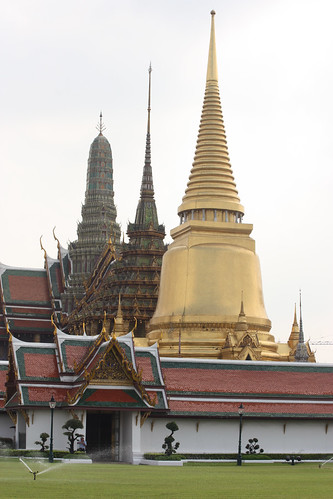 The Grand Palace was where numerous kings have lived and added on extra buildings as each new one moved in. The current king does not live there. Visitors don’t get to see everything but they do get to see two distinctly different sections – the old traditional Thai temple area and the more western grand palace that is similar to Buckingham Palace. Both are incredibly beautiful and awe inspiring but for different reasons.

The old temple area is completely surrounded by a pagoda area that has gold leaf highlighted murals on the walls telling a famous Buddhist story. There is a gold stupa and other incredible buildings but the highlight is the temple of the emerald Buddha. The emerald Buddha is probably large up close but surrounded by huge golden buddhas and being so far away it makes it look a lot smaller. It’s still imposing though. You aren’t allowed to take photos or wear shoes or hats in the temple but what is really difficult is that you aren’t allowed to point your feet at the buddah. I spent most of the time side on but it’s easier just to kneel. 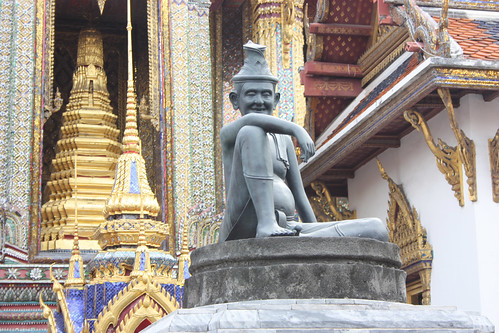 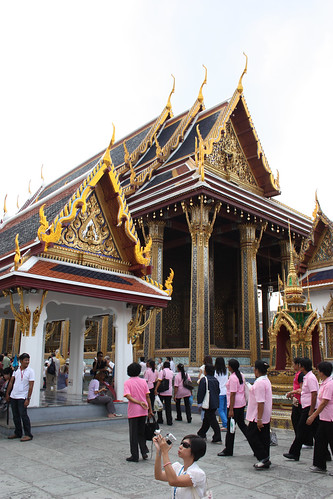 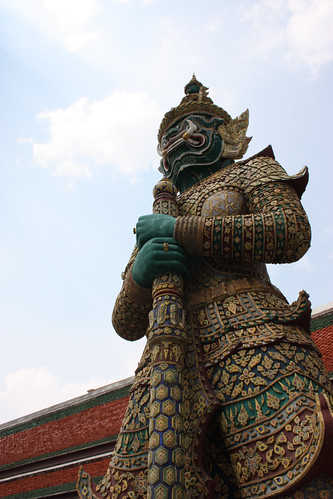 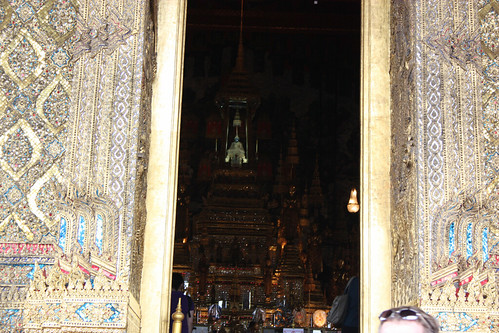 The western section has guards in white jackets ala England which makes sense when you learn the king commissioned English architects to design it. The one concession made was that it had to have Thai pagodas on the roof as per every other king before him had built. 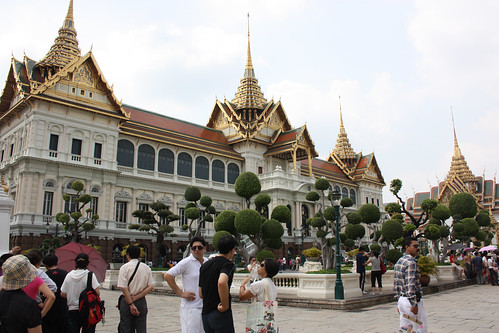 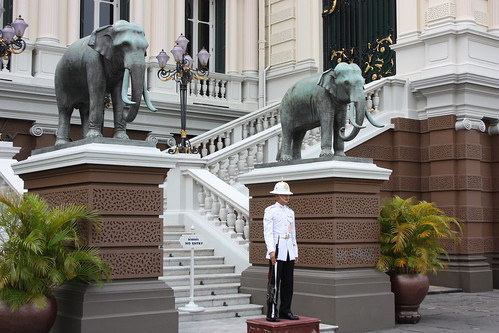 The tour took about two hours and although hot it was really good. I was getting exhausted though – for some reason I wasn’t on full cylinders, so I headed back to the pier and rode the boat till the end of the line. On the way back I stopped at the reclining buddah. It was only a short walk from the pier and cost 50 baht to get in. For Thai people both here and the grand palace it is free.

Walking in to the temple of the Reclining Buddah i was blown away. An American woman behind me blerted out what I was thinking “oh wow!”. I’d seen pictures of it but it was way bigger than I even imagined. All gold except for the mother of pearl feet it blew me away. Lots of people there made it hard to get a photo without someone in it though. 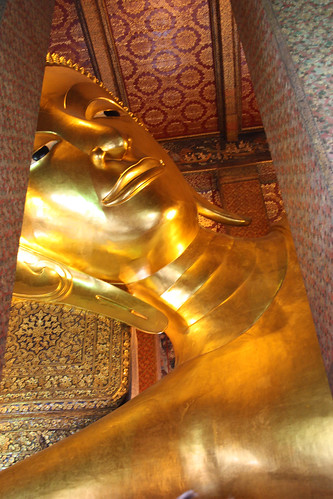 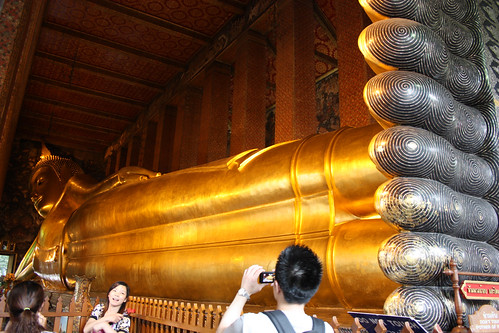 At the pier on the way back I watched the comings and goings of the long tail boats. I’d seen money exchanging hands with tour guides and a guy on the pier but it wasn’t until I saw 4 20 year old girls get asked for money when they got off their boat that I learned what it was for. The guy told them they needed to pay him 20 baht each. The girls looked sceptical as they had already paid for the boat and thought the guy was trying to rip them off. I would too, but it turns out there is a pier fare of 20 baht. I guess it is for private boats only cause I didn’t have to pay it. They ended up giving them the money after seeing another guide pay them but it does sort of leave a bad vibe about it. Think they need a sign to indicate the practise.

I headed back to the hotel around 2pm tired, hot and exhausted. Rested my poor legs and veged for about 2.5 hours until hunger drove me out in to the street. Wanted to try a good restaurant and there happened to be one down the street so I put on my jeans and headed down there – wanting to arrive before I needed a reservation even though the place opened at 3pm.

The restaurant was called Eat Me and was one of those trendy art gallery restaurants with soothing laid back music and greenery everywhere. I had a Siam daquiri cocktail to get started figuring I already had a headache from eating ice cream earlier in the day. There was already an english woman eating alone reading a table away and another English guy was seated between us. We were the only customers this early in the day. I was munching on the delicious fresh bread and olive oil/peanut and salt dipping bowls when I realized the other two had books they were reading. Emboldened by my cocktail I exclaimed to them that I was the only one without a book! This resulted in a cross table chat with the English woman who was teaching 5th grade down the road and had been here 4 years. She offered me some fantasy books but I said that was a bit too hardcore for five minutes of reading. Had a quick conversation until my food and a book about arrived Bangkok as the waiter had heard my book comment. Nice touch. I had ordered a cod with saffron, pine nuts and preserved lemon which was absolutely stunning. Perhaps the best piece of fish I’ve ever eaten. I was swooning the whole time. Since that was so good I went for desert of rasberry, mint, coconut and lychee salad. Although fresh and tasty it was too much food and my headache was getting to me so I ended up feeling a bit ill. The most expensive meal Ive had so far but so worth it. 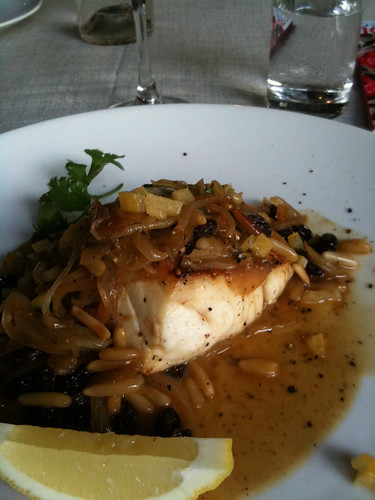 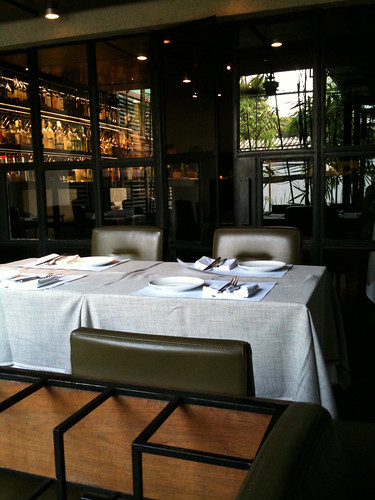 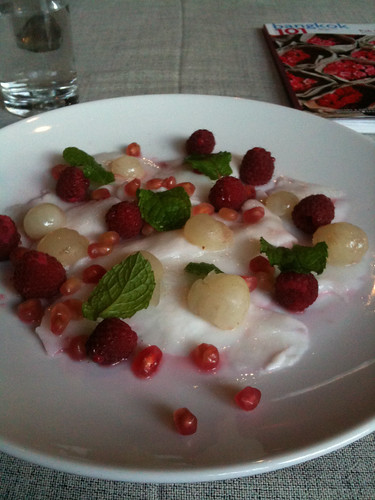 On the walk back to the hotel the smells of stalls cooking almost made me throw up. I did catch a young guy in a restaurant hut dancing to the radio who stopped as I walked past, but I emulated his dance for him which made him laugh. Then it was back to the hotel for some serious laying around and headache pill popping.