Breakfast in the hotel at the Lighthouse Inn. The usual american carb heavy servings of bagels and muffins were on offer along with a bowl of fruit. I was a little uninspired by the offering but at this stage my cold was in full effect and I wasn’t that hungry. At least there was coffee and a tv for us to watch the news in the garishly decorated kitchen and lobby. I guess I have different ideas on art than they do. The lift in the building was useful for us to wheel our luggage to the car. You ‘d be surprised how often we stayed in places where we had to carry our stuff up stairs.

Breakfast Bar at the Lighthouse Inn: 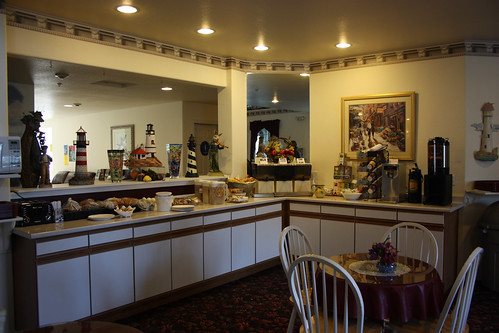 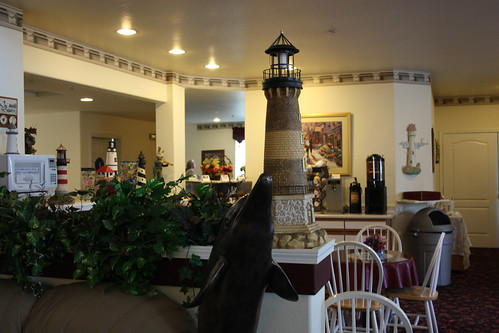 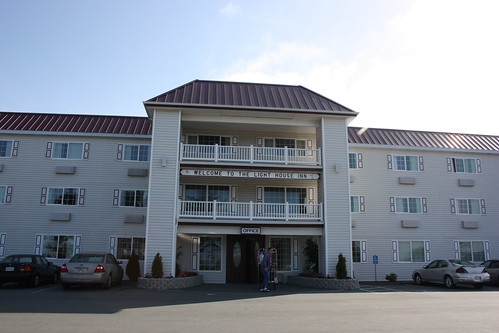 After about 30 minutes of curvy driving through fog and headlands we passed Klamath and stopped at the Trees of Mystery. Bill Bryson has romanticized the roadside attractions that popped up on American Highways in the 1950s and growing up near the Big Pineapple in Queensland, Australia I understand his  affinity to them. A common thread of roadside attractions is to have a really big thing out the front, a store selling trinkets and some sort of lame excuse for attraction – usually something from nature that awed Americans in the 50s. I imagine it starts by some enterprising person thinking “this *insert attraction here* is weird – we can sell it!”. Don’t get me wrong, I adore these places, but I understand what their real purpose is. The Trees of Mystery’s  big thing was Paul Bunyon and Abe the Blue Ox, the store not only sold trinkets but also had a Native American Museum and the real attraction was a walk around some huge redwood trees that had something special about them – enough to make them “mysterious”. 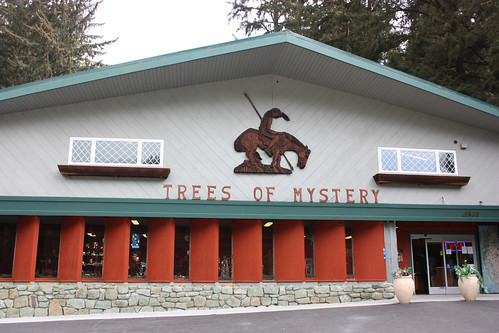 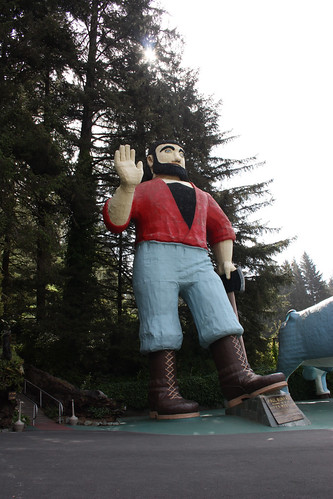 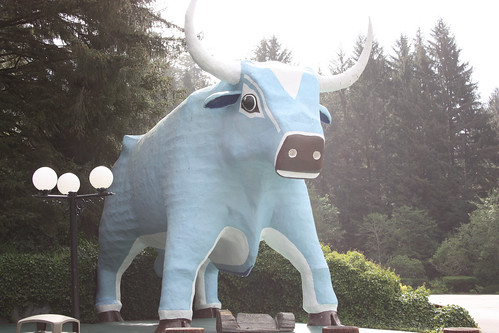 We paid our $14 to enter and debated whether to catch a mini bus up to the skytrail or do the walk. Auntie Sue and I were both out of sorts in regards to walking but we decided to do it anyway since we would have missed out on the real attraction which is the trees. I stocked up on tissues for the walk while the others went to the toilet and then we set off on our walk. Redwood trees are awe inspiring by themselves thanks to their huge trunks and height, but someone who was wondering the forest found something interesting in a bunch of them and formed the trail around them. There were Elephant trees, Natures Underpass, the Lightning tree, the family trees and the wedding chapel where people obviously get married. The walk takes us up to the Skytrail where you catch a pod up to the top of the mountain which overlooks the Redwoods and Pacific Ocean. It’s a really quiet ride – especially since there weren’t that many other people around. At the top of the trail we saw a birds nest on an opposite mountain at the top of the trees. They had binoculars for us to use to see it, but the ones Pauline brought with her were better. 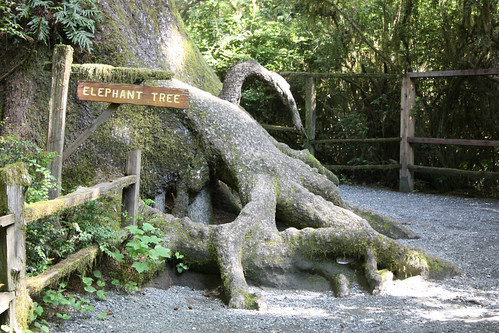 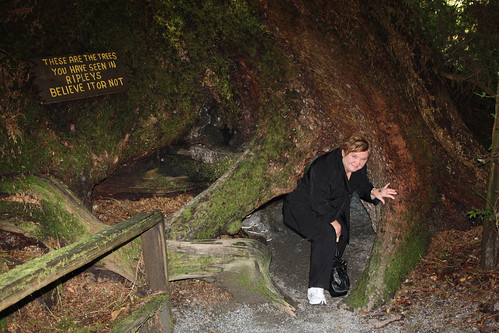 Fiona at the Brotherhood Tree: 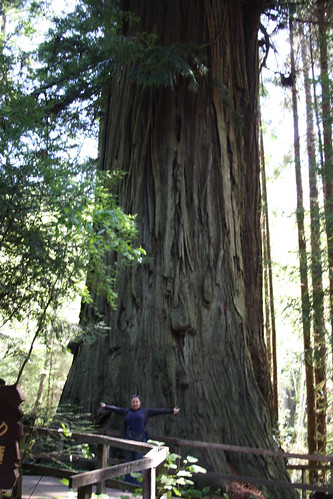 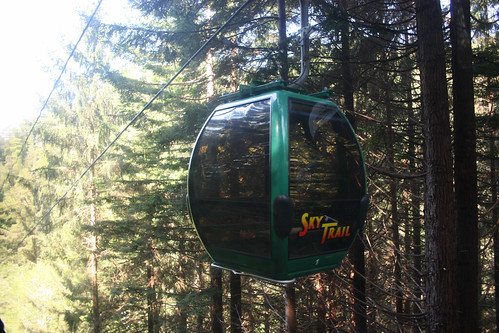 View at the top of the Skytrail: 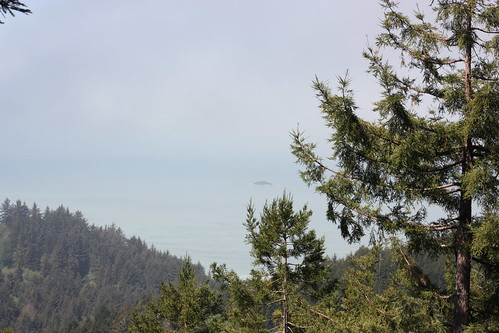 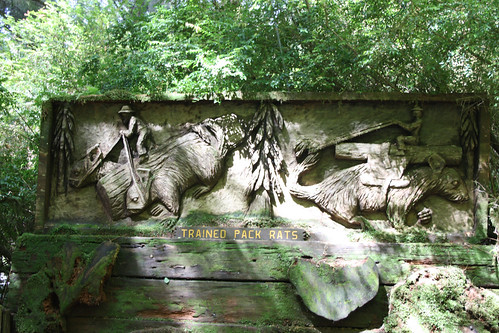 Back at the bottom of the trail we finished the walk looking at carved sculptures someone had made in the trees that told the story of Paul Bunyon. I wasn’t exactly familiar with the story and looking at the sculptures I still have no idea, but I know it has something to do with woodsmen, industrious rats and men who cook. At the end of the trail was a cut redwood base that indicated how old these trees actually were in relation to humans. After pausing to think how little time we have on earth we stopped to buy some fudge and other junk in the store. The Native American Museum existed because the lady who owned the Trees of Mystery liked to collect Native American items with her money and her private collection ended up so huge that she put it in the store for everyone to see. The ladies minding the store were interesting to talk to – I think cause they liked our accents they wanted us to talk. 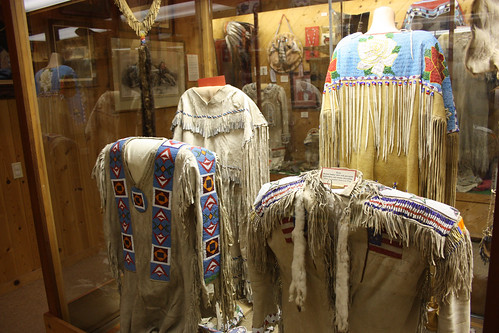 Back at the car we were readying ourselves to go when either Auntie Sue or Fiona who was in the back let out a scream. I turned around to see that a dog had jumped in the car ready to leave with us. The dogs owner came around to get him out apologizing that the dogs grandparents have a car like our minivan and he must have thought he was going with them. We had a good laugh about the whole thing – it would have been nice to have an additional passenger. After spotting some wild elk in an open field we put some miles behind us through Humboldt County  towards Eureka. In Eureka we drove through the old town but only did a drive by without stopping since our ultimate destination was the Avenue of Giants. I was amused by the Mr Rooter plumbing truck though – a juvenile moment of humour. 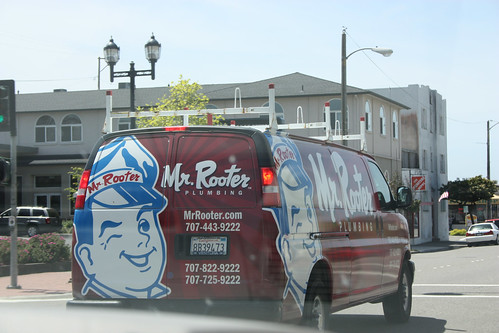 When I was growing up they used to have the Sunday Disney show on Sunday evenings. Sometimes there would be animated documentary type cartoons that were very California or future focused which captured my imagination – even if the subject matter was 20 years old by the time I got to see it. I vividly remember seeing a car drive through a tree and vowed that if I ever got the chance to go there I would. The Avenue of the Giants is the Redwood forest that has the tree you can drive through, so there was no doubt we were going to go there – even though by this time we’d seen enough redwoods to build a city.

The Avenue of the Giants is 31 mile drive of trees just off Highway 101 near Eureka. Some trees have names – such as the Immortal tree which has survived floods, chainsaws and lightning. We stopped at the immortal tree for a toilet break and photos and then pretty much drove till we reached the Shrine Drive-Thru Tree at Myers Flat. The lady there was enamored with my cartoon wallet which I pulled out to pay for entry. Fiona and I got out to photograph the drive through the tree while Pauline struggled to ensure the mini van didn’t get wrecked going through. Walking in to the store the lady we paid to get in called out for me to show my wallet to the lady inside. “Oh that is beautiful” said the lady in the store. LOL.

Lynne at the Immortal Tree: 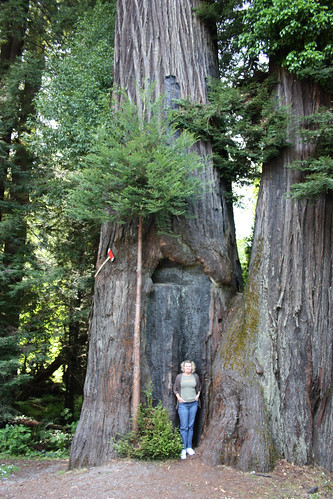 Pauline driving through the Drive Thru tree: 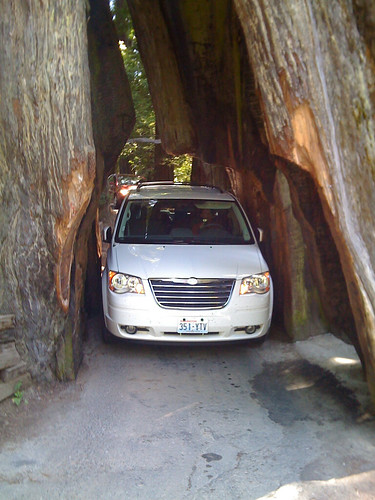 We stopped for lunch in Miranda where we had a good burger. The kid in the store there said that he had never seen anyone take a photo of food before and wanted to know why I had done it. My reply wasn’t satisfactory for him – “I just like looking at food”. He then proceeded to tell me some bizarre story about his sisters and walking to school and then we looked at the Nemo fish in the aquarium they had. I went for a walk to the wood store next door just as a police car screamed away. The lady in the store had come out to watch and admitted that it doesn’t happen much here. That started an interesting discussion about lifestyle and made me realise that even though this place was only about four hours drive from San Francisco it really was remote to them. Had to tell her I couldn’t buy anything from her shop since we can’t take wood back to Australia, but I did enjoy the chat.

The photo of the food: 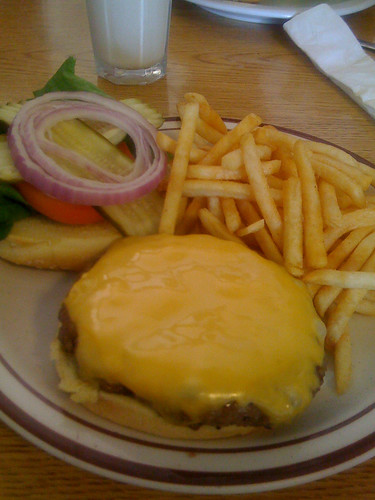 Leaving the Redwoods we headed down past Willits where the Skunk train leaves from and decided to spend the night in Ukiah. I am sure me and the others would have liked to have ridden the skunk train but our timetable didn’t permit an entire day dedicated to a train ride. Ukiah is a big town in the area, we picked it mainly because of the accommodation choices. Not having a place picked out already for the night we drove down the main strip to see what we could see. There was some debate over where to stay, but when we stopped for petrol a french guy suggested going over near the highway past the airport to the places over there. We had a choice between Hampton Inn and Fairfield Inn and Suites, so we price checked both and ended up at the Fairfield Inn. It was across the road from a Walmart so that is where we went to get some dinner. Mum ended up buying some noise canceling headphones after me nagging her to get some for the plane flights. Auntie Sue purchased some non slip strap bras which she later raved about. Mum nearly bought a pink flamingo nighty to wear in las vegas but decided against it. None of us had ever been in a Walmart before so we had a lot of fun there. It’s mainly like a Big W in Australia – the main difference being that Walmart sell beer (and maybe guns – I didn’t check). Evening was spent watching tv and having a bath.

Fairfield Inn and Suites in Ukiah: 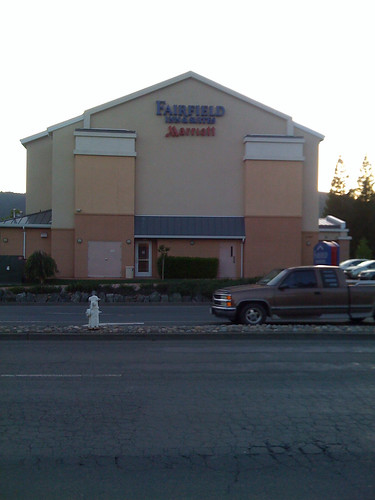 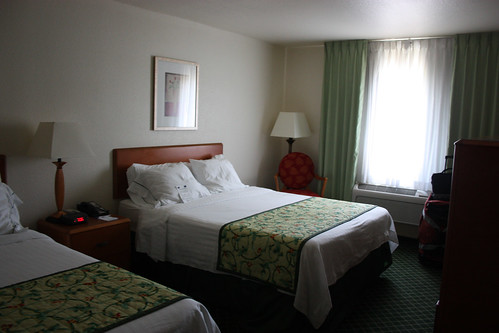 @j3thr0 I’ll do that today, yesterday was just a taste. 🙂
@Kelsbells and I will be there to greet you with a big sloppy chesty cough. Woo!
Driving along the 101 through the misty and moody redwoods.  http://twitpic.com/4v7e1
Visited the trees of mystery. Not sure what the mystery was but they are huge!  http://twitpic.com/4v84z
We just drove through a tree! I’ve wanted to do that since watching Disney in the 80s!  http://twitpic.com/4vm60
By my informal count I’ve seen about 40 eagles gliding over the highway on our drive today. I guess roadkill is easy pickings.
@j3thr0 it’s right near the powell st cablecar turnaround.
@j3thr0 I think she is barting. We are car-ing
Checked in to a hotel in Ukiah. Auntie sue is excited because walmart is across the road. None of is have ever been.
@GeekPornGirl Thanks, this is a really beautiful area. We are doing napa tomorrow for mothers day.
@cate3221 pictures don’t even do it justice.
@j3thr0 No, I’m not sure I’ve even seen one. I’ll look out for them now.
@cate3221 Having a cold unfortunately prevented me from activating that sense, but all the others got some action – except taste of course!