First full day in San Francisco and we decided to drive to Berkeley mainly because we planned to drop the car off that afternoon. Not everyone was interested in seeing the university though, so the only ones who came were Fiona, Mum, Pauline and I. We picked up the car in front of the hotel after the bell boys collected it from the carpark then headed off over the Bay Bridge to the University of California. It was 10am in the morning but traffic in to San Francisco was horrible at the toll bridge – worse than normal apparently. 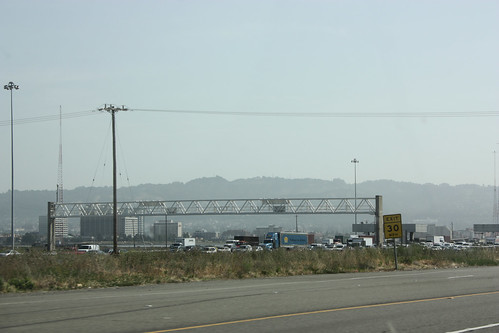 In Berkeley we drove down the main street and then headed over to the University. Driving through the campus we had to deal with students showing complete disregard for the car by walking in front of the car. I don’t know if that was due to having no sleep the night before from partying, no respect for gas gussling vehicles or just not used to having cars drive around with tourists gaping at them. We didn’t really see much from the drive so parked nearby and went for a walk to the Co-Op there. On the walk there were some really cool sneaker stores and a goth/punk clothes store that would have kept my sister Katie busy for ages. The co-op was a couple of floors of merchandise and I ended up buying a Cal state blue bear shirt from there that was wonderfully soft. We didn’t spend long there cause we had only paid for about 30 minutes of parking and got back to the car just before the parking inspector got there.

University of California in Berkeley: 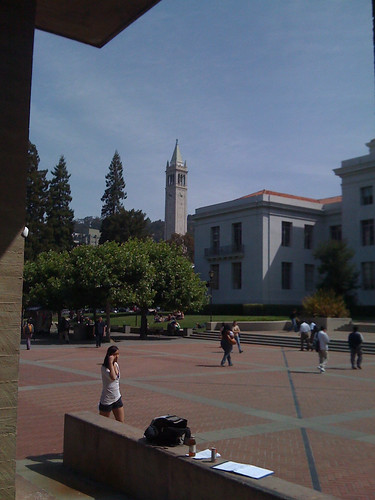 Our next destination was the Berkeley Marina where we took photos of San Francisco across the bay and drove past men standing on the road waiting to be picked up for a day at work. We aren’t accustomed to that sort of situation where you can just pick up someone to do a days work for you by the side of the road. Normally we hide all our unemployed in dole offices. The marina was windy and uninviting so we decided to drive back to San Francisco and visit the Twin Peaks that overlook the city. The drive took us over the toll bridge that was earlier full of cars but had cleared up from the rush hour. The drive up to Twin Peaks was curvy and dicey and Pauline did well to make it up safely. We were busting by the time we got there so had to use the toilet. There was only one toilet at the top of Twin Peaks and it’s one of those ones that washes the entire room after you leave it. Great in theory but when you have 5 people waiting to go and it takes 3 minutes to wash the room after each time leaves it becomes a pain in the arse. We also had the misfortune of a large bus arriving at the same time which meant a long line up to buy a shitty hotdog from a roadside vendor. It was also really really windy and cold up there so although we enjoyed the views we didn’t have the greatest time. 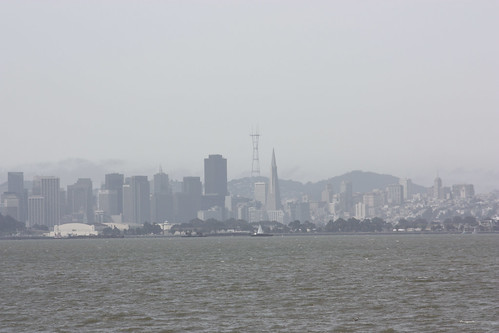 View of San Francisco from the Bay Bridge: 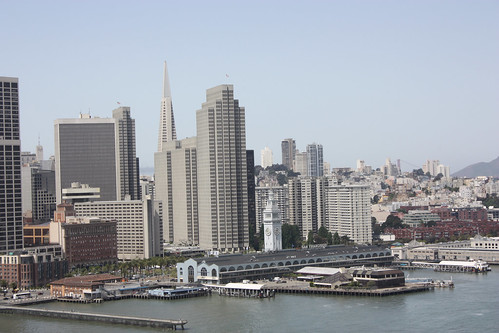 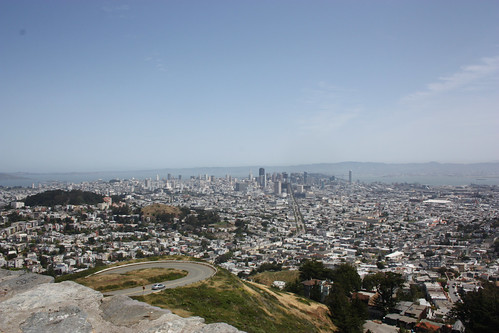 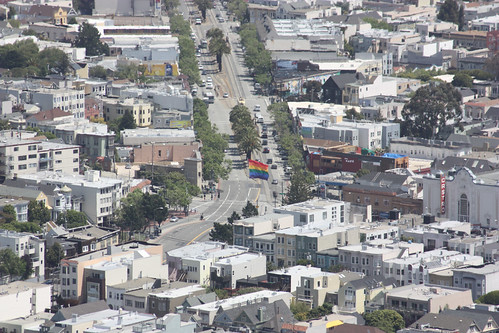 Pauline is grimacing with cold up on Twin Peaks: 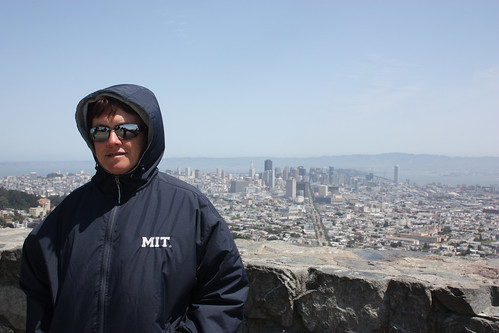 We returned back to the hotel to pick up the others, but unfortunately the car couldn’t fit us all in. Sue decided to take a hop on hop off tour for the afternoon so she declined and Fiona wasn’t interested in seeing more Redwoods so she also dipped out. The rest of the crew headed off to Muir Woods over in Marin County so it was another drive over the Golden Gate Bridge. The woods were donated to the federal government by a Congressman who owned the land. There are great walking trails that take you over bridges and past animals like deers and bush turkeys. For the others it was a chance to look at the different fauna that america overs while for us it was a little same old same old after driving through the Redwood Highway days earlier. 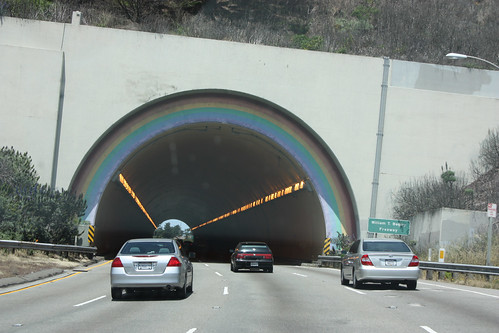 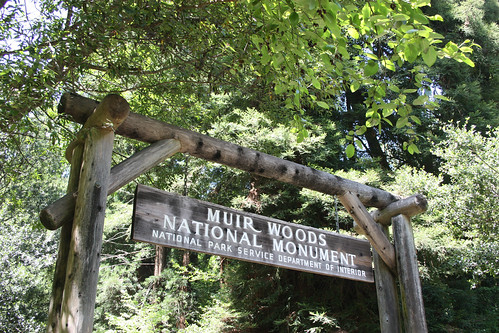 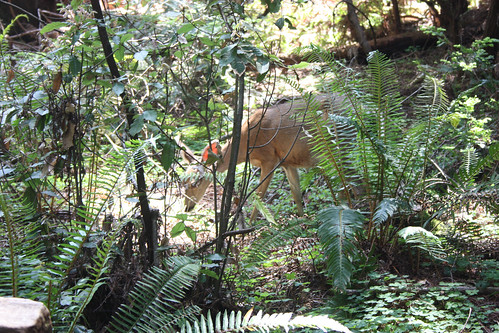 Amy and Kelly ham it up for Mat who is taking the picture shakily. 🙂 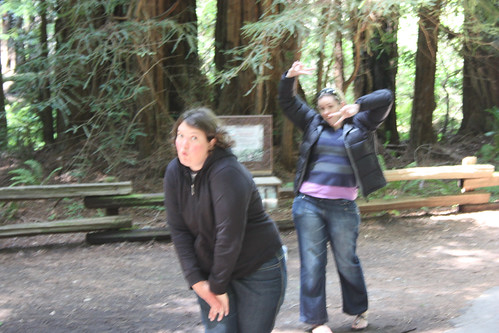 Pauline, Lynne and Madonna and some redwood trees: 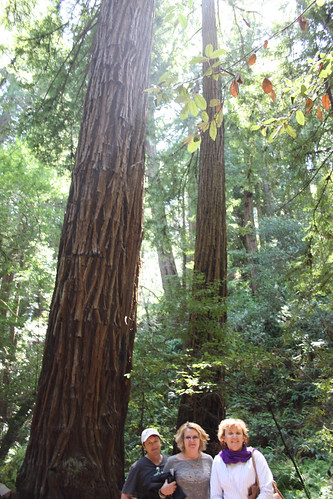 After the woods we drove up to the headland overlooking the Golden Gate Bridge and took some cool photos of the bridge and the city. It was incredibly windy up there and a few of us were afraid we’d blow away. San Francisco is always beautiful no matter where you look at it. On the drive back we drove down the crookedest street in the world – Lombard Street. Really fun to be in the car, but not as scary as when people go down on tricycles. Back in the city we dropped the others off at the hotel and then said goodbye to the awesome Chrysler Town and Country we had grown so fond of. It was no longer useful to us as we had too many people and wanted to downsize. Plus the cost of keeping the car parked at the hotel was just insane.

Pauline almost falls off the mountain from the wind: 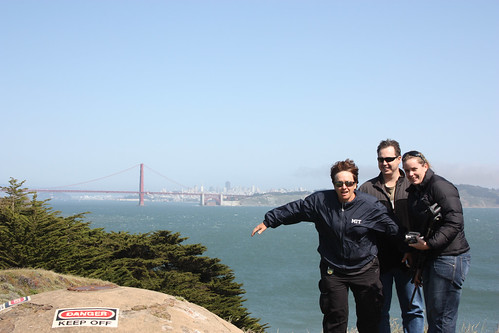 Mat, Lynne, Pauline, Kelly and Madonna take a “look I really am in San Fran” picture: 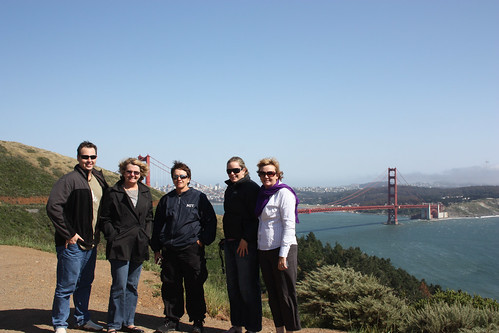 Kelly and Mat and the Golden Gate Bridge. (aw sweet): 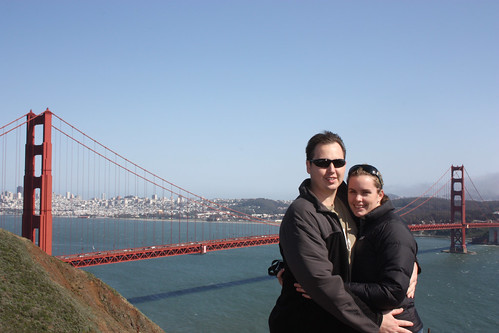 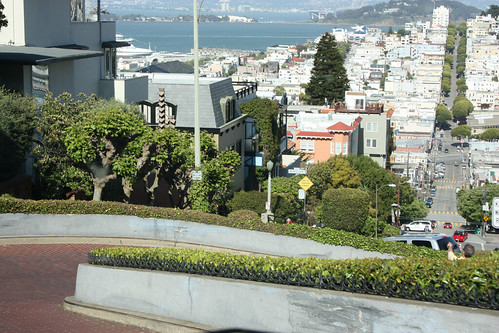 We all met up again to have dinner together and decided to go to North Beach for Italian. The walk took us through Chinatown down Stockton Street past smelly and dirty streets which were being cleaned up after the days trade. In North Beach we were spoilt for choice over italian restaurants so we pretty much just picked the one that looked like it could handle 8 people walking in without a reservation. That ended up being the Trattoria Volare Caffe. We shared the entrees and each got our own mains and had a little bit of a piss up family dinner italian style. We also had a good laugh at the handkerchief placement on the statue of David that was in the restaurant. Afterwards we walked over to the St Peter and Paul Church where Marilyn married Joe De Maggio then caught the cable car back to have tea and Bouchon Bakery cake in Auntie Sue’s room. Her and Fiona had the best view out of all us so we had to take advantage of it. 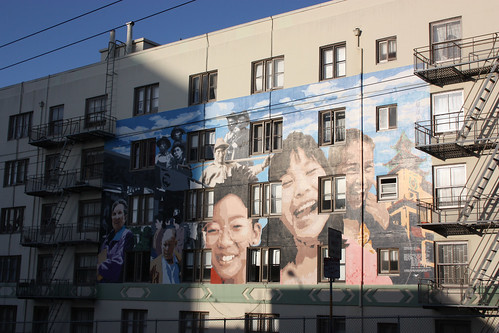 Choosing what to have for dinner: 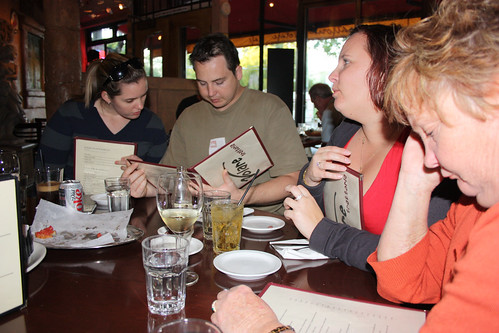 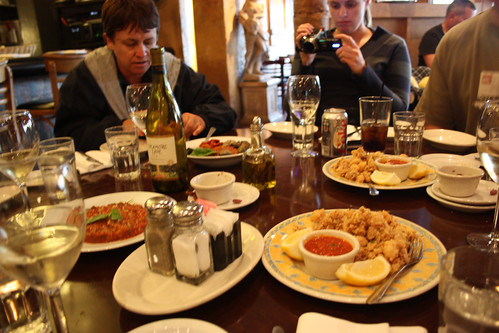 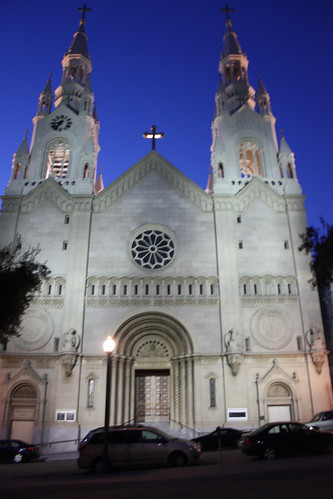 View of Union Square from Auntie Sue and Fiona’s room: 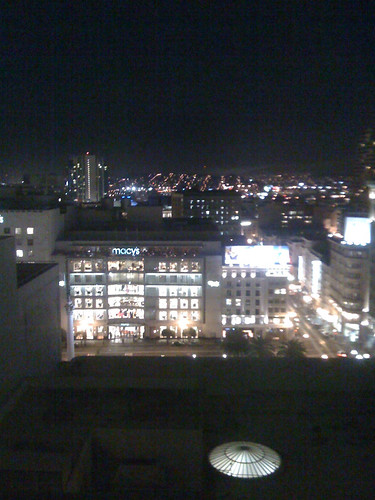