Today was visit Alcatraz day. Visiting Alcatraz was the highlight of my 2003 trip so I was excited to go again. We caught the cable car down to Fisherman’s Wharf which turned out to be a bad idea since the ferry pier had changed from when I went and it was further down near the Port of San Francisco – virtually the opposite end to where we got off the cable car. No matter, we just walked down to Pier 39, had a bit of a look at the shops and had breakfast at Boudin Bakery. Madonna and Sue had french toast which was huge. I hadn’t ordered much since I wasn’t very hungry, but I did get to try Madonna’s toast and it was incredible. Kelly, Mat and Pauline povved it and had McDonalds instead.  To save time we then caught the F tram to the Alcatraz pier. I stupidly hadn’t booked our tickets in advance so when we arrived we found a long line up. Not only that, but the shop couldn’t accept cards because the lines were down on the eftpos machines. They were advising us to use the phones to book our tickets and then once paid we would collect them from the store. While we were futzing around with that trying to get our cards to work, we were also simultaneously trying to pay for our Segway tour we were going to do the next day. It was rather tense and annoying but eventually we paid for both and lined up for the next boat to Alcatraz. The ferry ride out to the island is always fantastic. You have great views of San Francisco, the Bay Bridge, the Golden Gate and Alcatraz itself. Like the last time we had a bird hitch a ride with us gliding over the boat – they must do that to all of them. 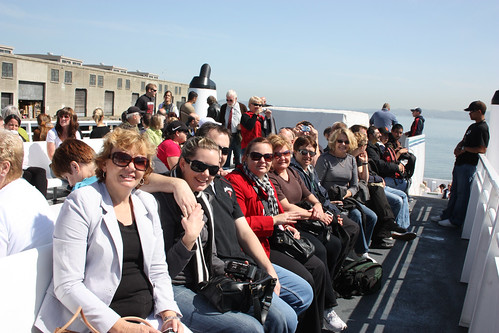 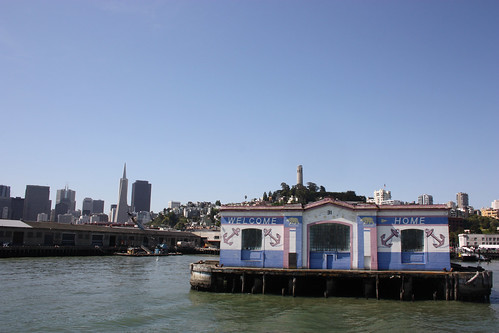 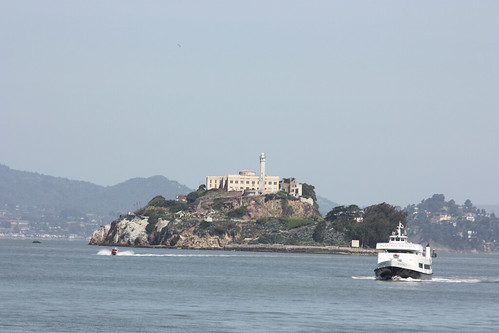 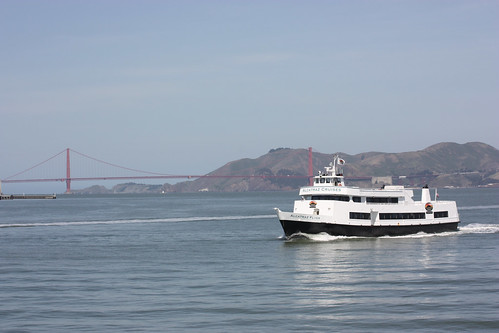 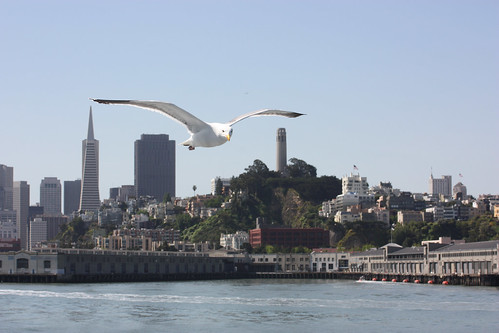 We were one of the last off the boat once we arrived at Alcatraz and instead of listening to the ranger we headed up the hill to get the audio tour headphones. Madonna was still really sore from her bike ride so Mum gave her a bit of a push up the hill. Once we got our headphones it was all silent as we wandered our way through the buildings. The audio tour is the best thing about Alcatraz. It has real people who were jailed, lived or worked on the island reminiscing about their time there – backed by sound effects that gave it a real movie feel. This time they had the exercise yard open so I spent a fair bit of time down there imagining I was Clint Eastwood in Escape from Alcatraz. If you sit at the top of the stairs you can just see the city which must have been torture for the prisoners. Somehow we all managed to lose each other on the tour and only really met up when it was time to get back on the boat. Even though I’d been on the tour before I loved it as much as I had the first time. I’m not sure if it’s because I have an interest in crime so I’m biased, but the others informed me that they enjoyed it too. 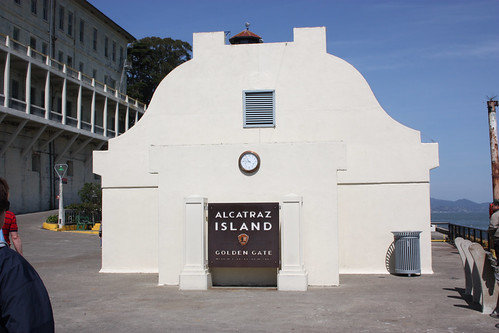 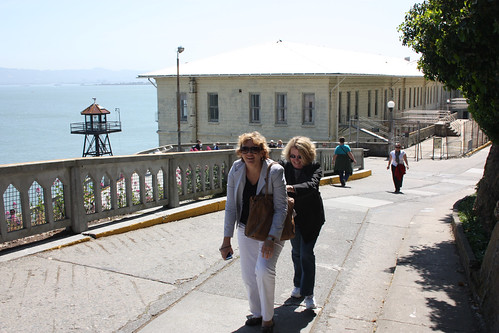 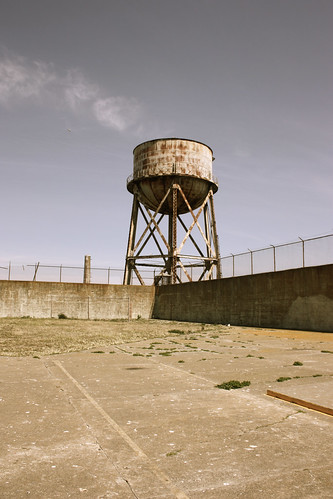 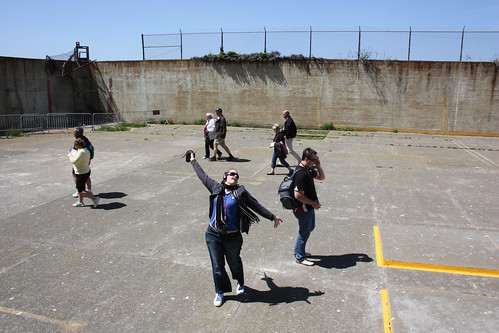 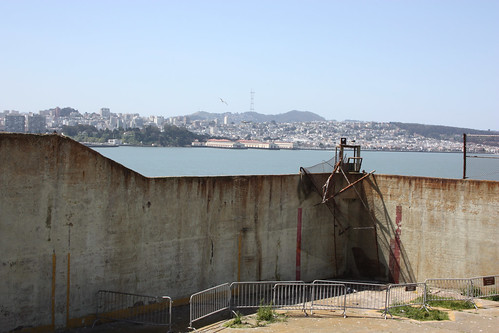 Back in San Francisco we walked again to Pier 39 where we looked and laughed at the sea lions and went shopping for jackets in the trinket stores. For lunch I only had one destination in mind, In-N-Out burgers. It’s not fancy by any means, but if I had to choose between McDonalds and In-N-Out, In-N-Out would win everytime. They only have stores in California and a few spattered just outside the state so the can ensure quality. The potatoes are hand cut in the store and the burgers are made to order. The others weren’t too fussed over their meal, but I loved it considering you only pay $2.35 for the cheeseburger. After lunch we walked up to Ghirardellis for a hot chocolate – once again something we did on our last trip and it was the best hot chocolate I’d ever had so I had to have another. Every hot chocolate I ever have gets measured against the Ghirardelli standard and this one was just a top up to remind myself how good they were. While I was inside buying them, the rest were outside catching some sun watching a homeless guy wet his jacket scooping coins out of the fountain nearby. 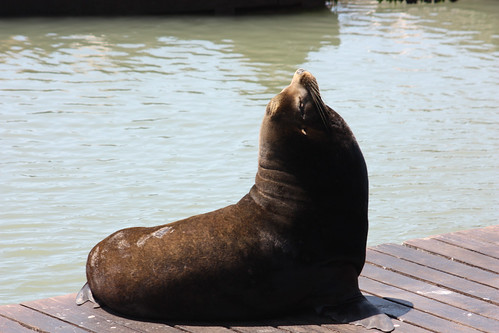 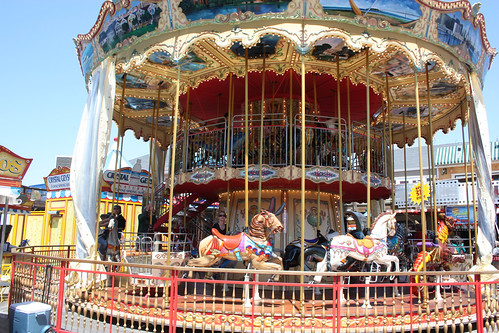 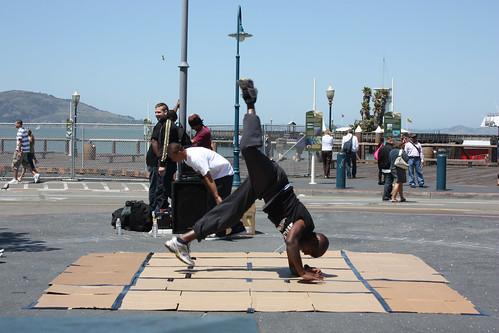 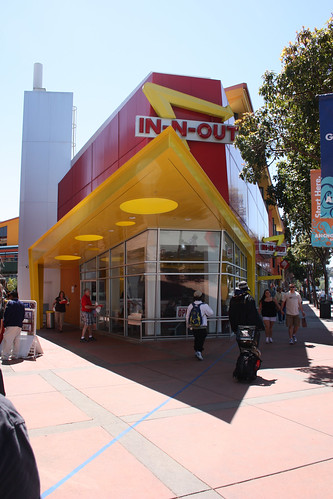 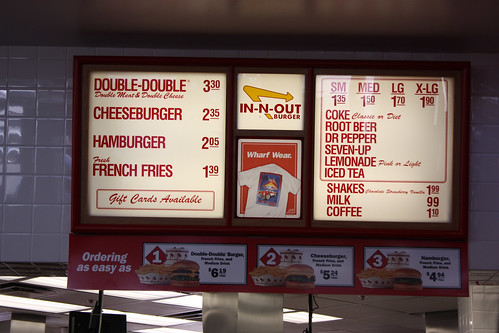 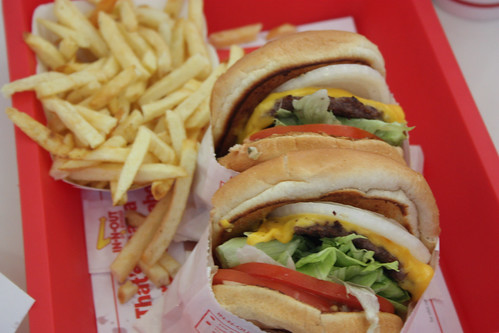 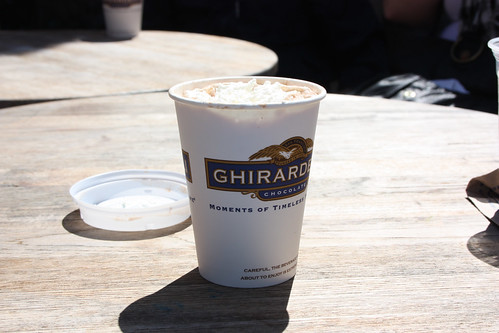 After the hot chocolate the rest of the group lined up to catch the cable car again while Pauline and I thought the line was way too long and instead caught the F Tram and then the California Street Cable Car. We actually ended up getting there at the same time as the others which was pretty funny since their route was way more direct. We all headed up to the hotel for a rest and then decided to go to Haight-Ashbury afterwards. We had to catch the bus out there which uses and overhead cable to power the bus. Haight-Ashbury was once the scene of where the hippy movement began, but now it has more of a punk rock alternative edge. No peace and love man here. A lot of young scruffy looking people on the street with their dogs made Pauline, Kelly, Fiona and Mat weary – think it reminded them of my other sister. Mum and Madonna though were having a good old time and I ended up buying a bag for my cousin Leif in one of the cool t-shirt stores there as a thankyou for minding the house. We also went in to Amoeba records which is a huge record store housed in an old bowling alley. By now we were hungry and stopped in at a hippy cafe for dinner.  I can’t recall being too impressed with my meal but it was better than I expected. I seem to recall the drink being good though. 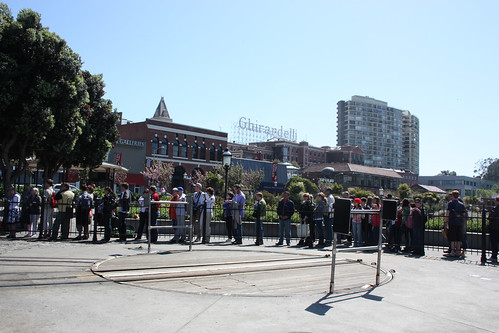 Back in town and I managed to convince Kelly, Mat and Pauline to come with me to visit a cocktail bar just down the road from our hotel. As we walked further away from Powell street the street got seedier and seedier and when we arrived at our destination there were homeless people shopping for change on the corner. We must have looked odd standing there with my phone out trying to figure out where the bar was. The others were just about to give up when I crossed the street to get a better look from there. While I was searching for the bar the others were being told that this was a dangerous area and they shouldn’t really be there. The guy who told them that then crossed over to me with the group he was with and just at that moment the door behind me opened and I caught a glimpse in to a beautiful world behind a door. This was the place! The others crossed the road to tell me we should go and I pointed out that I had found it. The guy who had warned us away buzzed the door which opened and he claimed to have a reservation. I butted in and asked if there was a chance we could come in too. The lady told me to wait and she would see. After a bit of a wait the bouncer told us we were lucky and that we would probably get in, cause normally she wouldn’t say that. Eventually we were granted access and taken to the back of the bar where the booths were. The place was just incredible. You aren’t allowed to take pictures but let’s just say the design and ambiance was stunning. Mat couldn’t believe that somehow we were allowed in to this exclusive type club and that it was dedicated to bourbon and cocktails. We took our time ordering from the menus and even had a little aperitif cocktail as a present. Our waitress brought our impeccably made drinks which we sipped slowly while enjoying our time in the bar. The place is meant to evoke memories of the prohibition era when you had to drink in secret and the fact that it was so hard to find made it’s theme ring true. We had a great time in the bar then carefully walked back to the hotel trying not to be mugged. I think that bar visit was the first time Mat really started to enjoy the trip and feel comfortable about being in America and I’m really pleased I got to introduce it to him. It was a real man’s bar. 🙂

Alcatraz today. My plan is to lock @Kelsbells in the birdmans cell. But she is the type of person who would like that.
Today I am rocking my Nike acg kicks which are the ugliest shoes I have but so comfortable I can’t stop wearing them.
System was down when we arrived to buy the Alcatraz tickets. Should have bought them online like my gut told me to. Had to use the phone!
Worried that I’d be bored on my 2nd trip to Alcatraz but nope still love it.  http://twitpic.com/51oum
@camds it’s eerie even when there are lots of people because they are silent audio tour listeners.
I will never get sick of looking at San francisco. It’s such a beautiful city.
Bet u wish you had smeller for these seals at pier 39.  http://twitpic.com/51z3k
It’s been 6 yrs between in n out burgers and damn I’ve missed them.  http://twitpic.com/5242m
@Contendo I will happily have one 4 u
Ha! The parking inspector is getting towed in haight ashbury.  http://twitpic.com/52onz
We have been inducted in to the bourbon and branch cocktail bar without the password. So happy to be here.