Early solo breakfast in the hotel then met with the tour group at 8.30am. This was our first trip together as a complete group and I got to meet the two young Aussies Lisa and Luke (first time overseas for Luke first in Asia for Lisa). 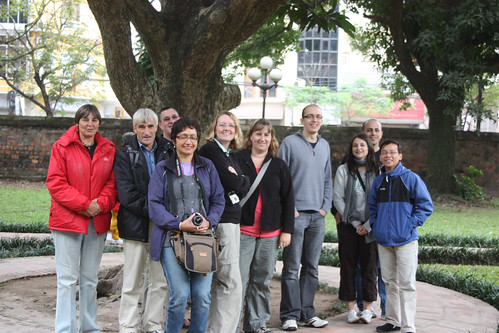 9 of us in the tour van and our first stop was Ho Chi Minh Mauseleum. It is closed on Mondays so we didn’t get a chance to see him but the building he is housed in is rather impressive as are the guards in their white outfits protecting it. We mainly just looked around, took a few photos and got back in the van. 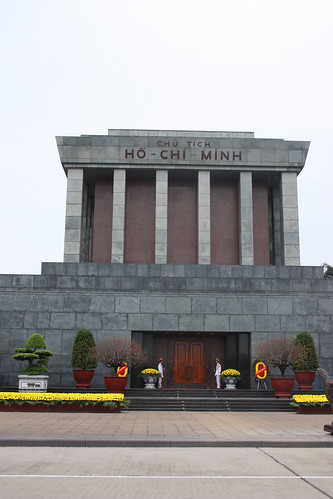 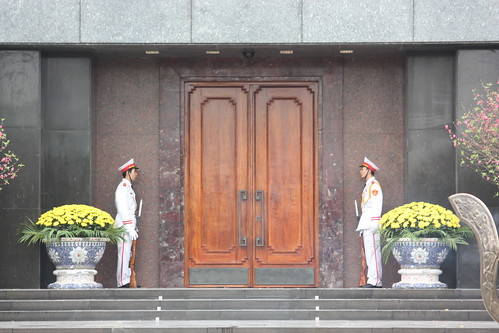 Our next stop was One Pillar Pagoda which wasn’t the original but had been ruined by either the French or Americans (I can’t remember which). It was a temple created by a king to worship the woman in his dream who told him to go find a peasant woman to marry and she would give him a son. He did as she said and was given a son. I think Hui said it was the smallest temple in Vietnam. In the bigger room nearby there was an actual ceremony going on with chanting and bowing and such. 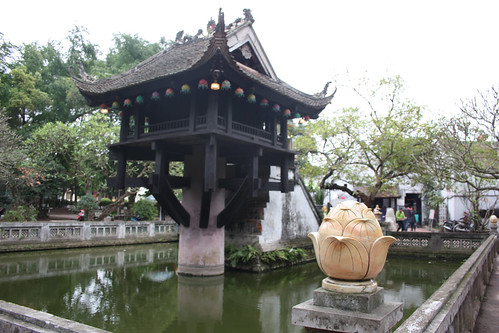 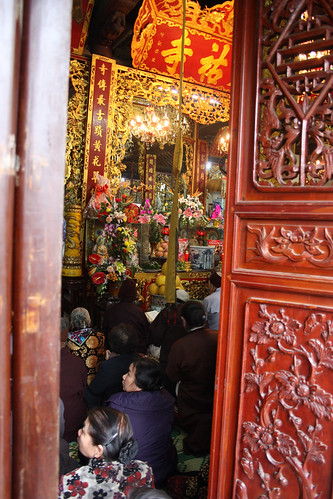 Another short van ride and we were at Hoa Lo prison (aka Hanoi HIlton). This prison was created by the French to lock up unruly Vietnamese when Hanoi was the capital of Indochina, but it got it’s nickname in the American war because it housed American pilots as war criminals. The Vietnamese treated the pilots really well which is why it got the nickname. The Hilton chain has actually purchased some of the land the jail used to occupy and now have a rather tall hotel right beside the jail. 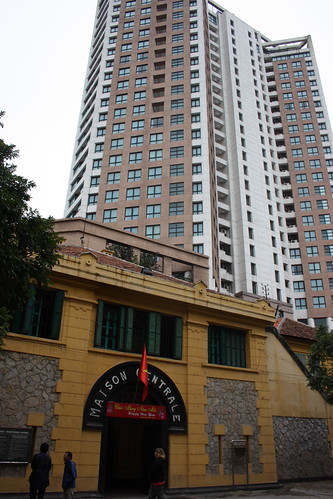 The jail is interesting for the way it locked up prisoners – on a platform with one long steel ankle lock. Each man would have an ankle locked in and he would just have to sit or lay there. There was also solitary confinement which has the same ankle lock but also it wa sloped downwards so the blood would rush to your head. The torture room was full of grotesque French contraptions like the guillotine. The women weren’t as bad off as the men because they didn’t have to deal with the ankle lock. They had a special section about the American war and showed photos of John McCain (American senator) visiting the jail in 2000 (he had been a prisoner at the Hanoi Hilton during the war). 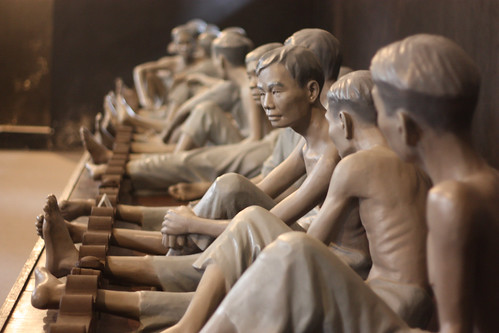 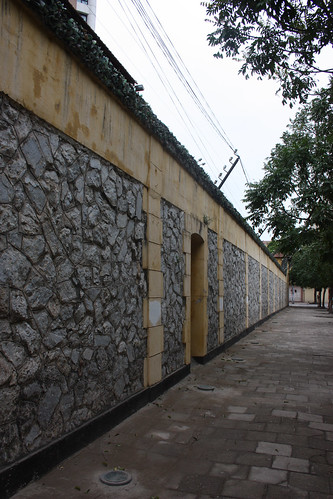 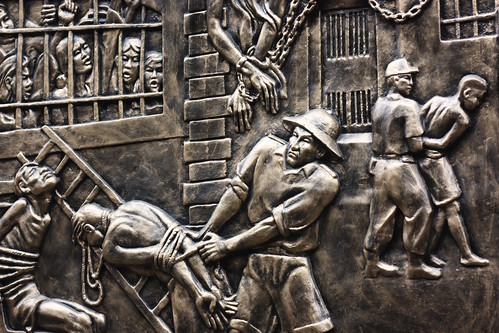 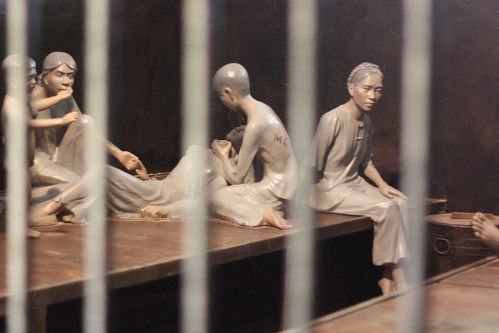 Another temple was our next stop – mainly because other things were closed for new years and the only thing open were temples and government tourist spots. This place was full of people coming to make offerings and I spent more time people watching. There was an old lady that shooed us out of the way (don’t think she likes tourists) and another lady that stood out with her bright pink miniskirt, stockings and fur coat with matching heavy pink eyelids. After the quiet of the last few days, all the zooming scooters around the temple were slowly bringing it back to the madhouse driving I loved! 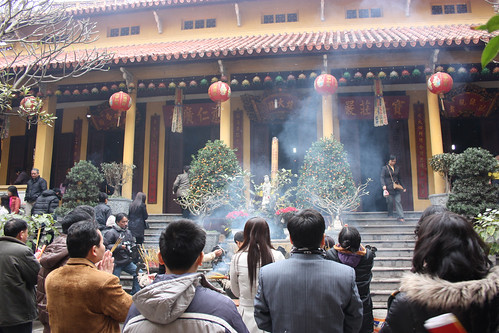 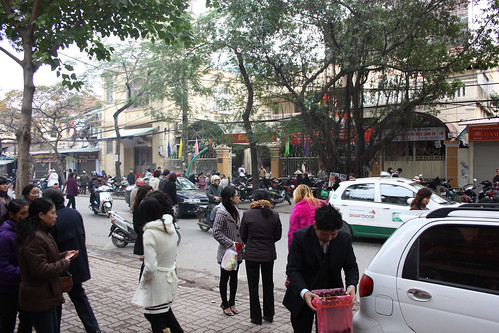 Our final stop on our morning tour was the temple of literature. It’s a series of 5 enclosures and if you study hard enough and pass the exams you can move through them all until you are in the final one which gives you access to the king. This was the busiest place we had been to all day and there were lots of touts and popcorn sellers outside. The first two enclosures were gardens and then we moved in to an area that had scriptures written on blocks that were being carried by turtles. Everyone was rubbing the turtles heads and the scriptures so that most of the writing had disappeared. Kind of a shock to someone who is used to not being able to go near old things in order to preserve them. 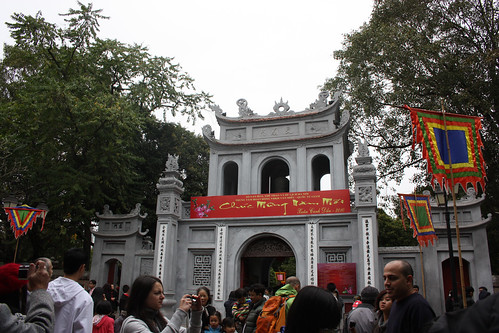 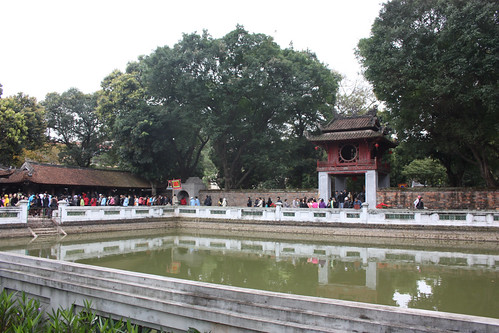 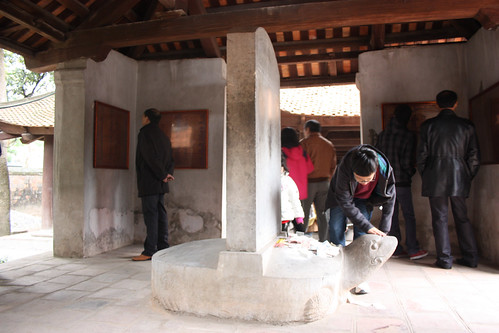 In the next enclosure there was a sort of chess game going on between a couple of old men and everyone sat around then watching. There was also a bunch of little stalls to buy souveniers or gifts for the temple. The final room had a statue of confucius where people were praying. The wooden building was quite lovely. 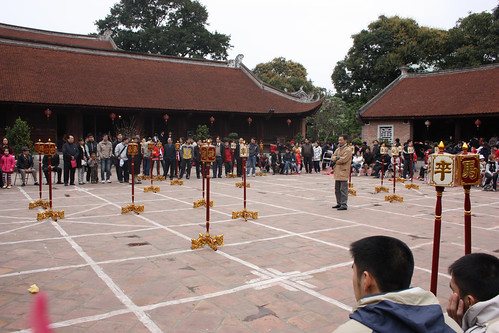 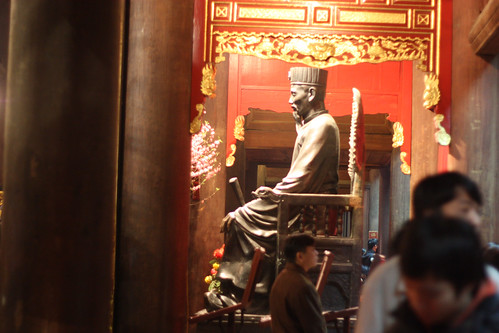 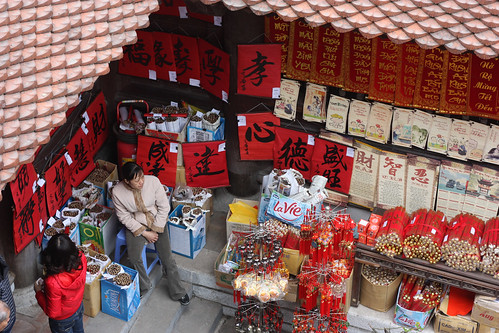 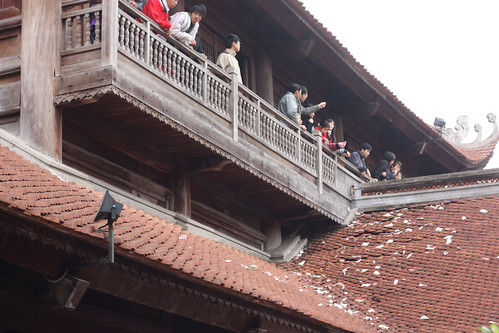 After the temple of literature we crossed the road for drinks at Koto which apparently is run by an Aussie guy who uses the restaurant to help homeless Hanoi kids sort of like Jamie Oliver does. Then it was back to the hotel for some free time. We were all hungry by this point so half went to little Hanoi and the other half went to papa joes bakery. I did papa joes having already done little Hanoi and yes I had a cheeseburger. We needed to get dinner for the train too so we got some food to takeaway and then just killed some time until 5.30pm. 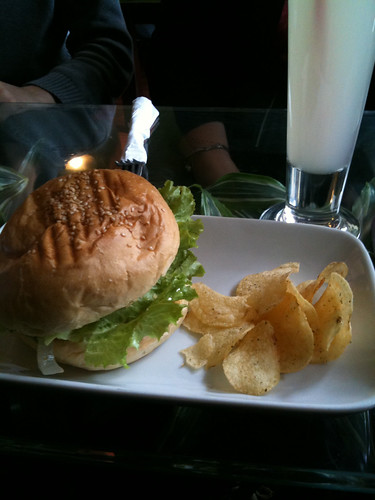 At 5.30 we got a taxi to the train station – 3 taxis in all. Ours was a speedy little driver who was listening to traditional Vietnamese music until we got in. Then he changed the tapes and all I heard was “let me hear you say yeah!” – the song was 2unlimited’s no limits which was a perfect soundtrack. So funny. 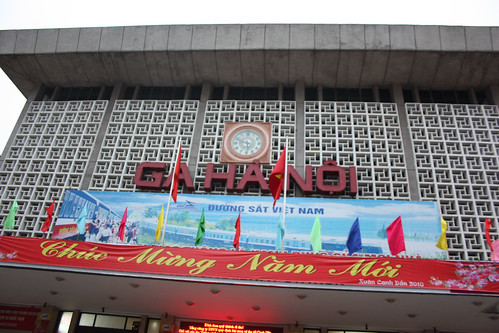 At the station we didn’t have to wait long until we were allowed on the train. 4 of us to a carriage and I was in with the other 3 newbies – the two Aussies and mark the Brit. Mark and I played rock paper scissors for the bottom bunk and I won. We had to stuff our luggage under the beds and then all squeeze in. The room was pretty ok though, we could all sit upright on the bottom bunks which we did for a few hours watching the lights of Hanoi turn in to rice fields. We had to make our own beds and the aircon of the train was blowing in my face but it wasn’t too cold. We all slept in our day clothes though cause it wasn’t that warm either. Some kid had left their worm toy behind that had a frog face so we called it froggy and gave it a bunk in the storage space above my bed. I also joked that we could commit the perfect crime since our room had a cop, accountant, solicitor and computer geek. We were to reach Hue around 8am the next morning and it didn’t take long for us to fall asleep. 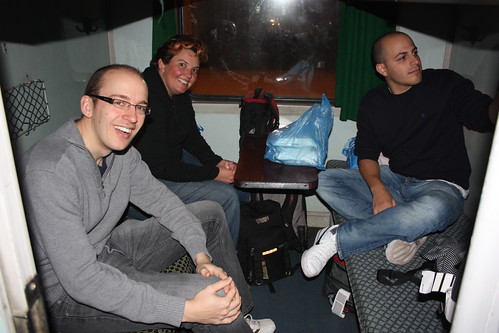 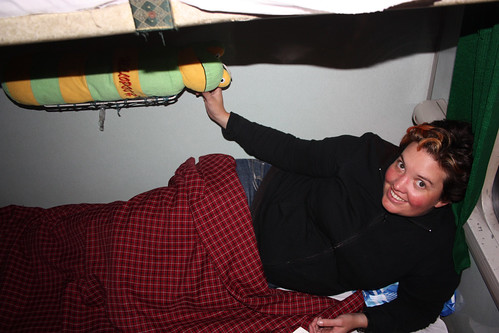