We caught the F tram out to Fisherman’s Markets to the hire car lot. It’s cheaper to hire away from an airport because you don’t pay airport taxes but the choice is not as good. Mat and Madonna were given a Rav 4 because they had asked for a 4wd but we had asked for a big sedan. In the end we had the choice of taking a Lincoln Continental or a Dodge Nitro for the same price. After going up to the carpark to look at both cars we ended up choosing the Dodge Nitro. The lincoln looked so ugly (policeman use them as cop cars) but the boot was really big. Dodge Nitro was a big 4wd also as well as being an american car and it sort of looked cool so we went for that. The car company had to go and get a gps from somewhere so while we were waiting I went and picked up some disgusting breakfast from subway. 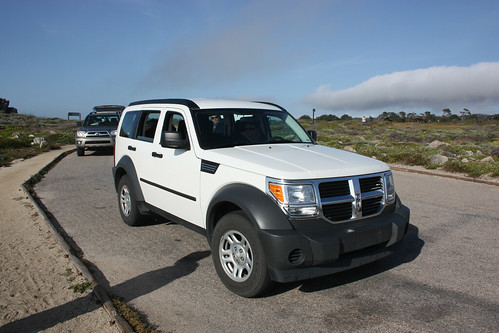 On the way back to the hotel to pick up the rest of the gang I rode with Madonna to help her acclimatize to driving on the other side of the road. I can tell you it’s a hard task to do when your first experience is driving through the middle of San Francisco but she did really well. There are a few rules that we don’t have, like being able to turn right on a red light (which I wish we had) and getting your bearings about how close you are to the curb is difficult. At the hotel everyone was packed and waiting for us, so I went and checked out and picked up our bag while everyone loaded things up. Madonna, Mum, Kelly and Mat were in the Rav4 while Pauline, Fiona, Sue and I braved the Nitro. The gps was a little annoying getting us out of town and on to the freeway and I was a little stressed about it, but within 10 minutes we were saying goodbye to San Fran and heading for Cupertino.

Madonna tailed us closely for a while not wanting to get lost, but after a while she gained confidence and went it alone. Our first stop on this part of the road trip was 1 Infinite Loop Cupertino. For those in the know it’s the address that all Apple products come from and of course if you visit there it’s a store. Pauline and I had come here in 2003 but it had been shut for the new years period so this trip was more to fulfill an unrequited wish – actually go in to the store. There was merchandise there that you probably can’t get in any other store, “I visited the mothership” t-shirt being one of them but only Kelly actually made a purchase. We probably stayed about 10 minutes. 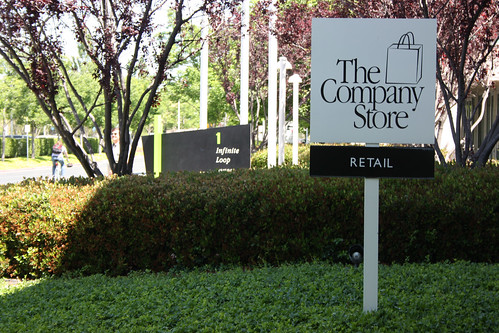 I visited the mothership t-shirt: 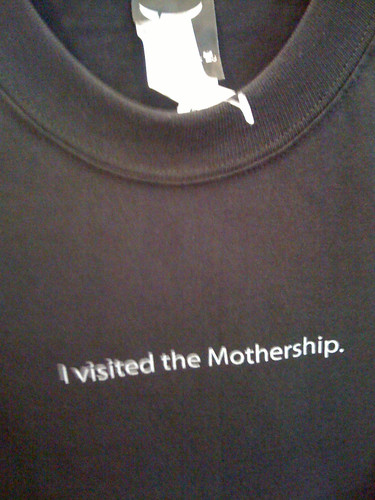 After that visit we took the gang to Fry’s nearby which is a huge nerd store that sells computer gear, televisions and home appliances. Most of the group favoured the massage chairs and didn’t move from that area while Pauline geeked out all over the store trying to find batteries for her little tiny penlight. There is a cafe in the store where Kelly and Mum got something to eat and I bought bad coffee. We actually spent a fair amount of time in the store – longer than I expected but we walked out with some more 4GB SD cards for our cameras.

Fiona and Madonna loved the massage chairs in Frys: 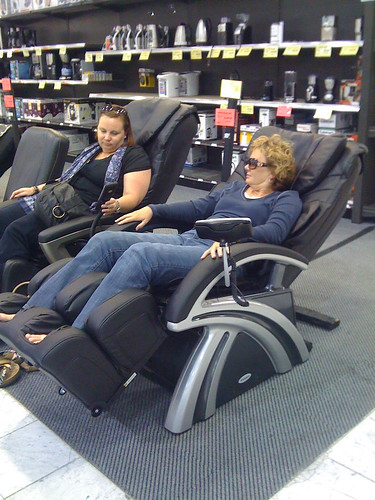 Our next stop down the 101 freeway was in Gilroy for some outlet shopping. Madonna, Kelly and Mat had not yet been annointed in to the joys of bargain shopping and Mat for one was poo pooing the idea. Auntie Sue had to go to the Fossil store to replace a watch that had been sold to her broken earlier in the journey. Meanwhile Kelly, Mat, Pauline and I wandered the Adidas store where Pauline bought a Vespa shirt and Mat picked up some nice slacks and a whole bunch of other gear. We visited some more stores like Nike, where surprisingly no one bought anything. He was on a high because he discovered how much cheaper the clothes were here. Needless to say he changed his mind about outlet shopping. We still had a little time to kill before we met the others, so we did a drive over to In-N-Out burger for some lunch. We were a little late by the time we got back and the other ones had actually started to worry we had taken off because the car had gone missing.

Views from the 101 freeway on the way to Monterey: 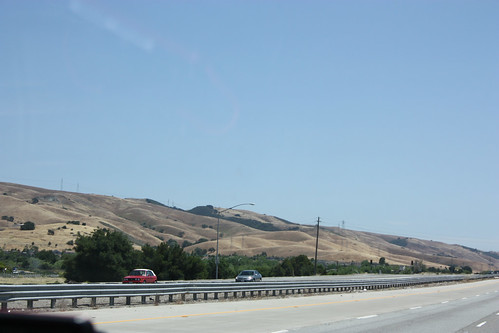 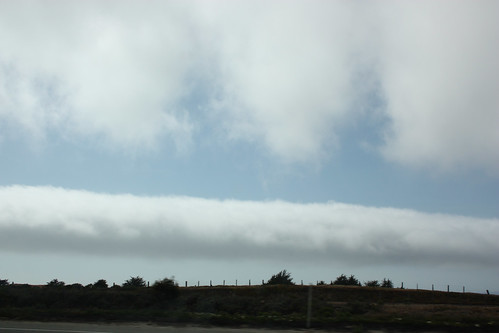 An hour or so later we drove in to Monterey, the cannery town of John Steinbeck fame. It’s a beautiful place that has an excellent Aquarium (which Pauline and I saw on our last visit) but the focus for most of the group here was food and specifically seafood. We all sort of split up to fulfill our various needs. On this visit I was less in awe of the place and found it a bit too touristy for my liking even though it hadn’t changed since the last visit. I guess it had lost it’s allure even though the bay was still stunningly beautiful. It’s a unique place and definitely worth one visit. We only really spent an hour there since we had to pay for parking in the street and if you weren’t going to the aquarium there wasn’t that much to do. 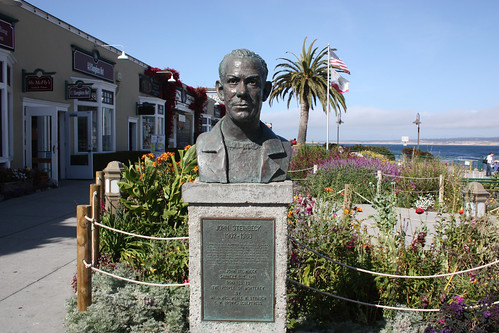 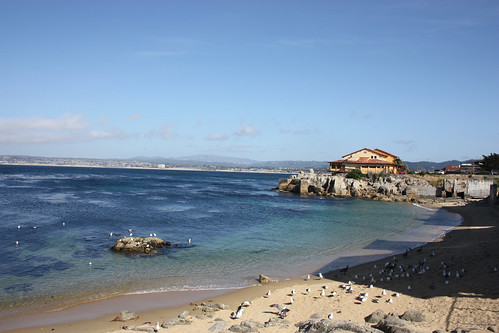 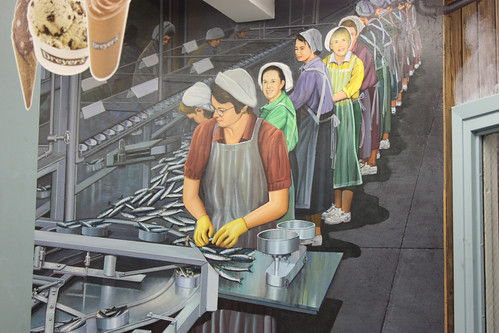 Leaving the old town we drove down some back streets to the start of 17 mile drive. This was another one we did in 2003 but I reallly wanted to share this with the others. You actually have to pay to drive the road, but it has some amazingly beautiful rocky coastline as well as some expensive houses and elite golf courses. It was rather windy and cold though and everytime we got out of the car we felt like we were going to fly away. We lingered for some time at the Lone Cypress to look at the squirrel that was happy to pose for photos and then we took some group shots of the gang. We even saw some deer on the drive! 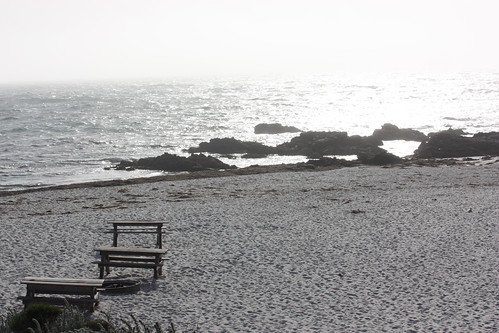 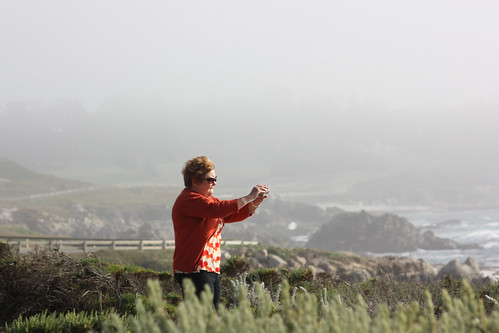 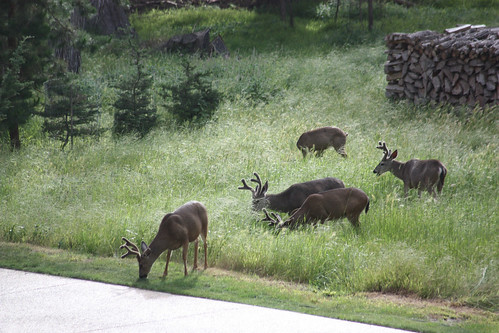 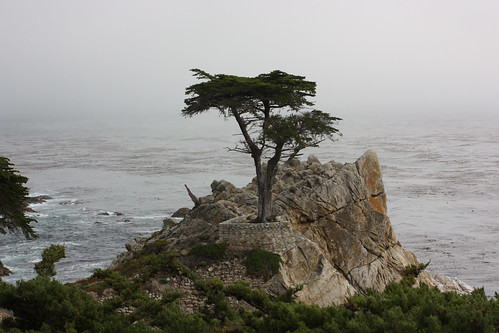 Squirrel at the Lone Cypress: 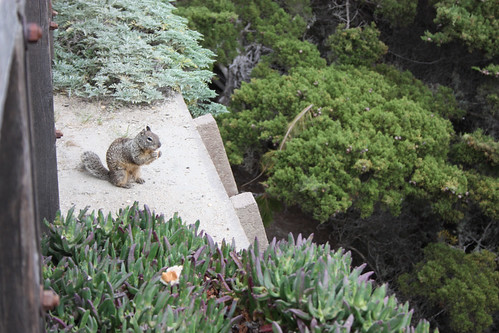 Mat unknowingly becomes a deer while getting his photo taken with the gang: 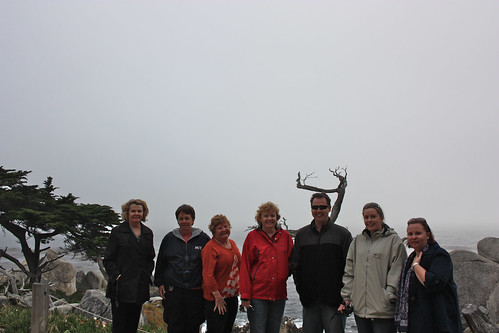 The end of the drive takes you to Carmel where Clint Eastwood was once mayor and Doris Day lives. There is a rule in town that doesn’t allow any franchises to set up shop there which means that it is a really pretty town with no garish signs anywhere. We stopped for dinner, but not wanting any big restaurant meal we made do in the bakery. Carmel also has a mission which was shut when we arrived so we had to make do taking photos over the fence. A classic California fog was rolling in as we stood there and watched it, which was something I hadn’t experienced on our last trip. It’s kind of spooky.

Mum takes a photo of the Carmel Mission: 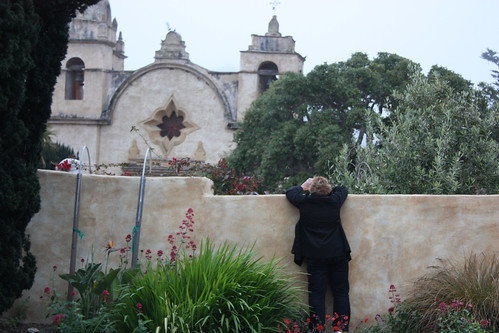 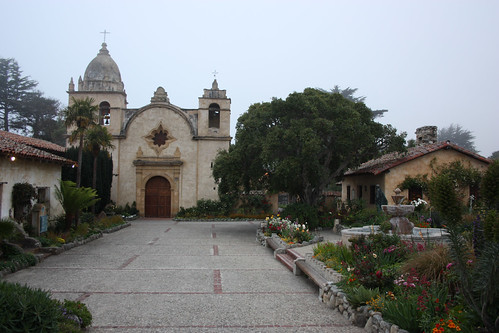 Fog on the way to Big Sur: 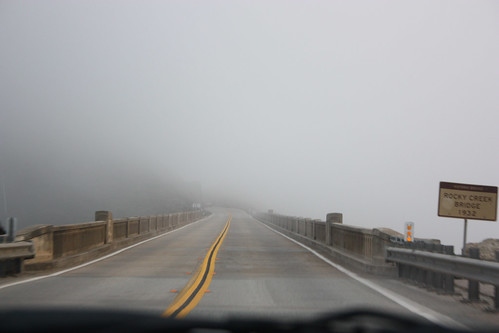 Back on the 101 again we headed towards our lodging in Big Sur called the Ripplewood Cabins. Earlier in the day we had rung up informing them that we would be arriving around 9pm as we thought we were running late, but we actually made better time than planned and rocked up around 8. We had been told where the keys would be so after arriving we went to get them only to have them not be there. A little confused we were wondering what we were going to do when a guy who worked there walked up to us and angrily asked us what we were doing. We informed him we had booked the cabins and were just getting the keys. He talked to us rather snarkily until the lady (i’m guessing his wife?) intervened and confirmed that we had booked the three cabins and it was ours. It wasn’t a very friendly introduction to the place but all was forgiven once we saw the fireplaces and the river that ran behind Kelly and Mat’s cabin. Mat was in heaven and immediately went to set up a fire while the rest of us all retired to our rooms to recuperate from the last few days. It was a really peaceful stop and I’m glad Kelly found it – even if her and Mat got the best cabin. 🙂 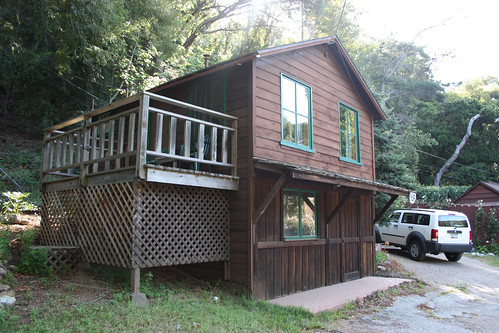 The bed in our cabin: 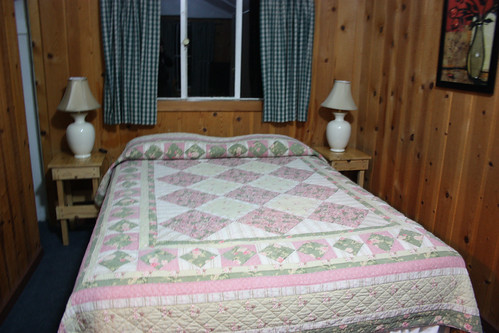 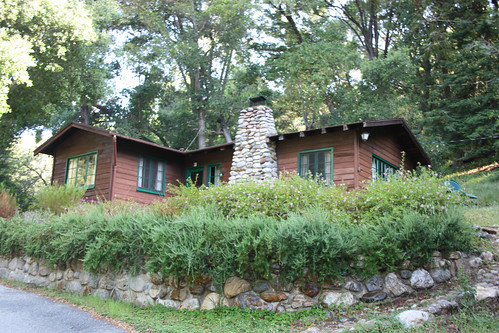 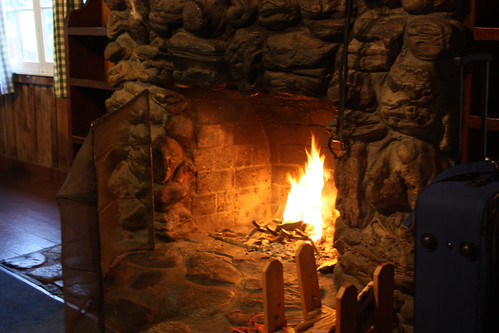 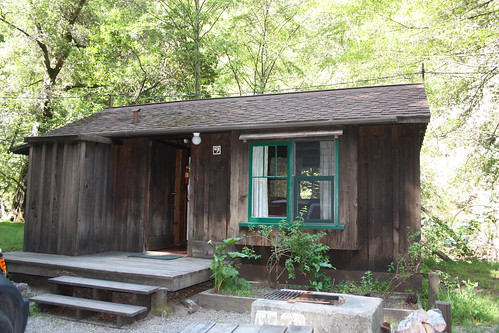 The brook behind Kelly and Mat’s cabin: 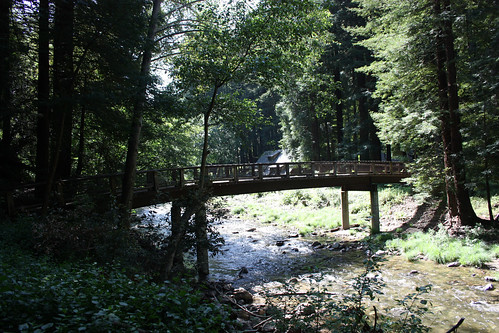 @clialios Somehow we missed the .3 earthquake, must have been on a boat. did you see I saw a top chefbian?
@danoz75 @kelsbells may have video!
Visiting the apple mothership at 1 infinite loop http://twitpic.com/55yvd
Hanging out in fry’s electronics. They have 4 customer service registers for returns and questions
We are visiting the Internet today in San jose. So far we have seen eBay, yahoo, cisco and mcafee
It’s a dippin dots ice cream vending machine! http://twitpic.com/56czl
Just did the 17 mile drive near monterey. Blowy and beautiful and cold! http://twitpic.com/56zk9
Checked in to our hotel and jealous of @kelsbells cabin by the burbling river at the back. We are rustic tonight. No tv but internet works!
@danoz75 highway 1 and big sur was a really foggy drive tonight so visibility was low. Hope to see more tomorrow though.