Big Sur is special primarily because its wilderness nestled between two major cities on a busy highway in California yet retains it’s peacefulness. Waking up in a log cabin in the middle of Big Sur ticked off one of my bucket list wishes and I didn’t care one bit that the cabin could see the highway. After getting a great night sleep we all met up in the cafe at Ripplewood for breakfast. The usual unlimited cups of horrible filtered coffee was offset by the really good maple syrup pancakes. Mat indulged in a big manly breakfast with a side of watermelon – a nice californian touch. After stuffing our bellies we wandered down to the creek to check out Mat and Kelly’s cabin and the bridge. The redwood trees surround the campsite and I was immensly jealous of their spot. 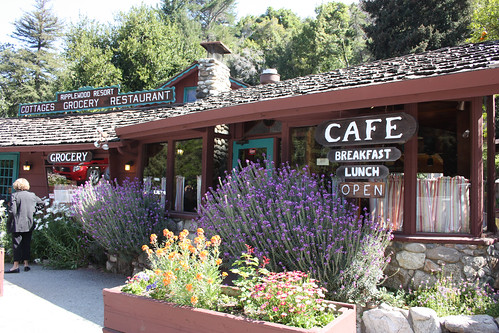 Pancakes at the cafe at Ripplewood: 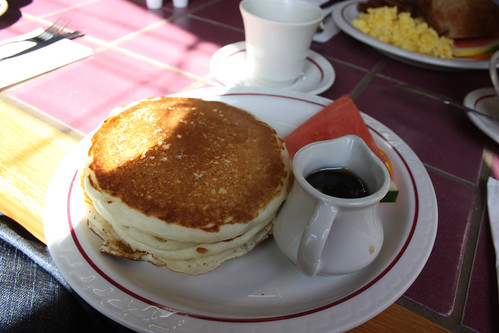 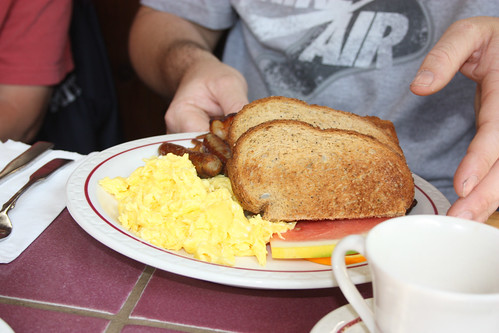 We packed up all the cars and headed back to Carmel to redo the drive we’d done the night before in fog, but it was still foggy so we turned around and headed south in the direction of LA along highway 1. Mum, Madonna, Kelly and Mat were again in the Rav while Fiona, Sue, Pauline and I took the dodge. We lost the Rav at Rippelwood on the return leg when they stopped for postcards. The morning was spent driving on the curvy highway that hugs the coastline of the pacific ocean. Stopping was frequent to take photos and discuss how a woman was killed by some old people when they pushed her over the edge to collect the insurance. We threatened to toss Auntie Sue over to help us all pay off the trip.  I really love this drive and feel a weird peace I don’t really feel anywhere else in the world. It’s just an odd sort of happiness. 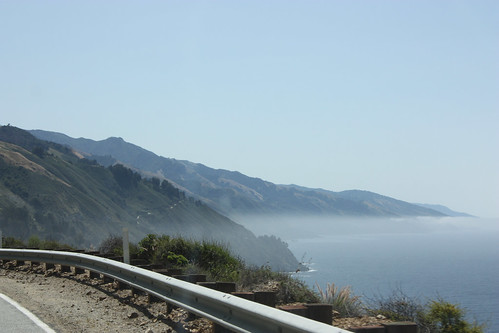 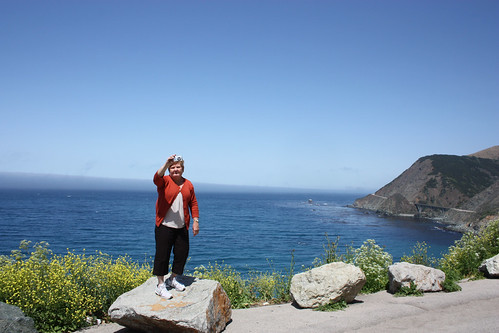 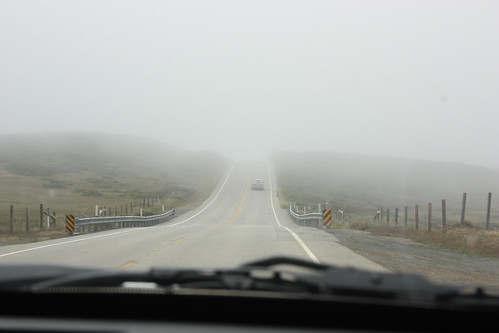 Near San Simeon we stopped in a carpark to look at the driftwood, I mean stinky seals. There were a tonne of them just lounging around on the beach catching some rays and showing off for the tourists. Someone had a really beautiful matching blue car and caravan – even the bicycle on the back matched the paint job. California is so proud of it’s 50s/60s heritage when it came to world attention and I love being reminded of it constantly since I’m a huge fan of that era. 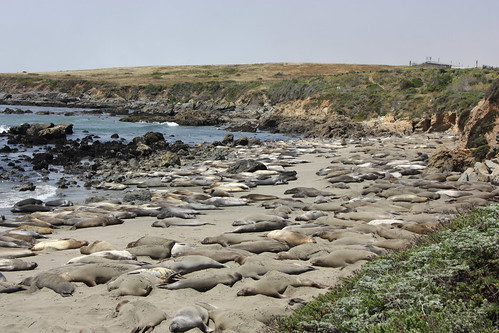 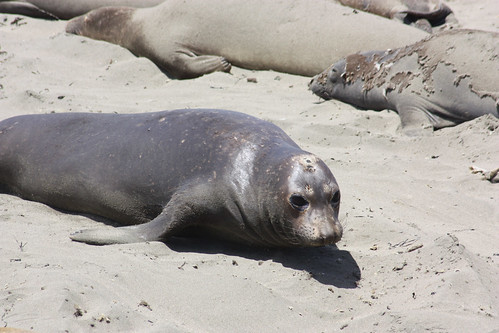 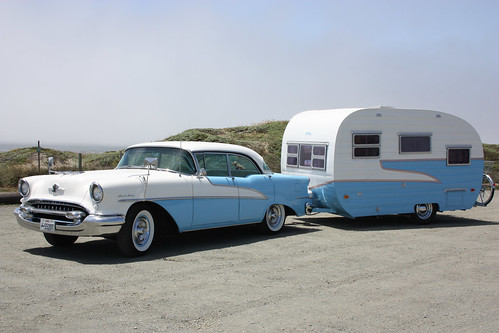 After the seals we drove in to the Hearst Castle Visitor Centre to book a tour. Pauline and I had been on Tour One already which is the recommended tour for first time visitors, so while the others picked that we went on Tour Two. Tour Two takes you up in to Hearst’s private suites and the kitchen as well as the two incredible pools. I actually enjoyed tour two way more than the first tour because it’s almost like a behind the scenes type deal because you see his bedroom. I think if you don’t visit Hearst Castle when you are in the area you are really doing yourself a disservice by missing out on this incredible building. I wish I was a hollywood starlet in the 40s and got an invite to it. After our tour we waited around for the others who then went in to watch the film which fills in the details that the tour guides don’t. We were hungry and managed to grab some sub par food from the cafe there. Kelly and Mat weren’t interested in the film so they sat with us playing flight control on Kelly’s iphone. 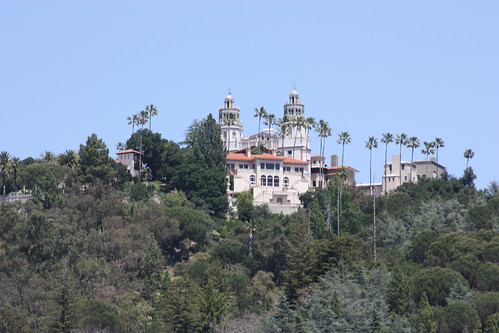 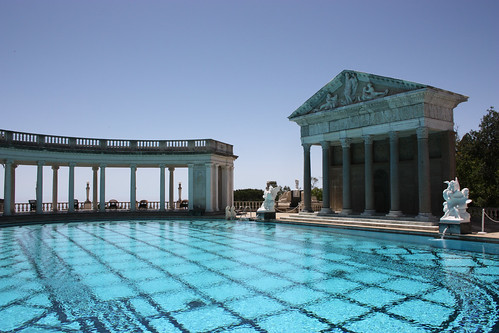 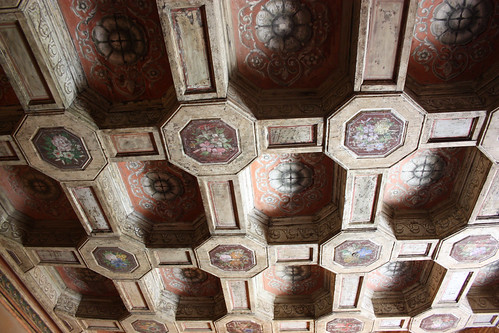 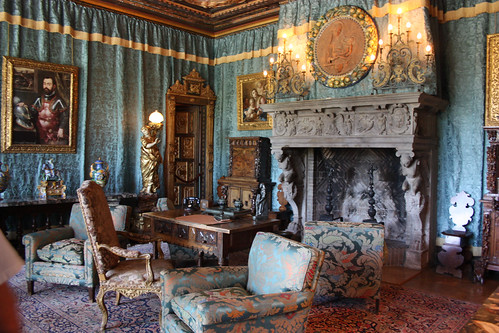 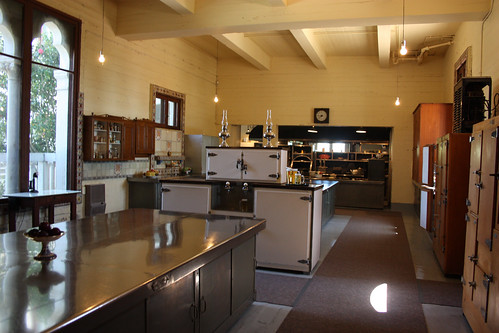 Back in the car we drove to the Madonna Inn – a theme hotel. It’s a tourist stop on the way down highway one and we were stopping there not only because we had a Madonna with us who could pose for photos in front of it, but also for it’s mythical toilets. When you walk in to the cafe it’s like a little old lady was allowed to decorate the place with pink leather, fake flowers and rock walls. That is garish enough, but when you go downstairs to the toilets you are exposed to pink leather padded doors and chandeliers in the ladies room, while in the mens you get to piss against a rock wall. We got Mat to check it was empty before going in and gawking. Kelly stood up against the wall pretending to be a man and it actually flushed, wetting her hand because it comes down the wall. We cried laughing at the fact that she needs a little bit more practice as a man. We left the Madonna Inn having not done anything except look at some toilets. 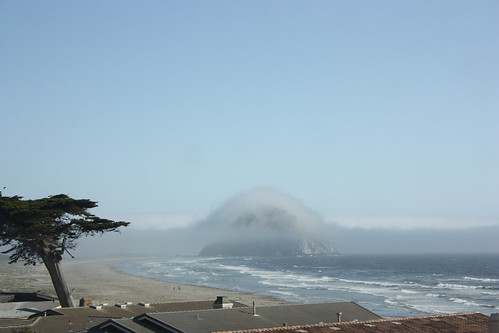 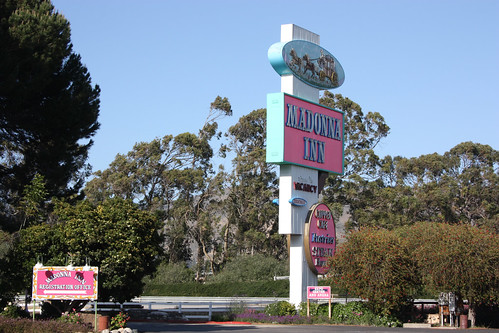 Madonna at the Madonna Inn: 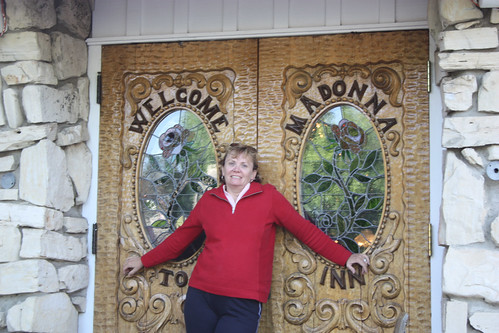 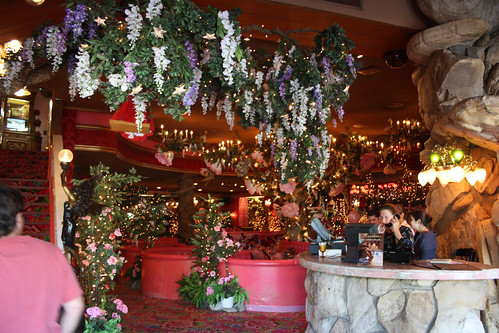 Ladies toilets at the Madonna Inn: 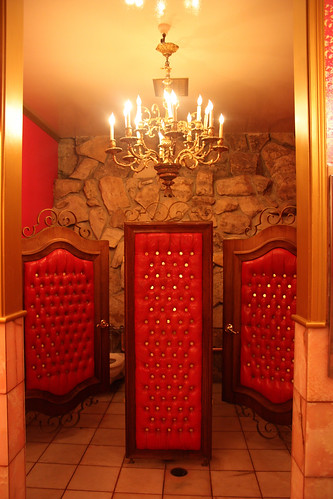 Mens toilets at the Madonna Inn: 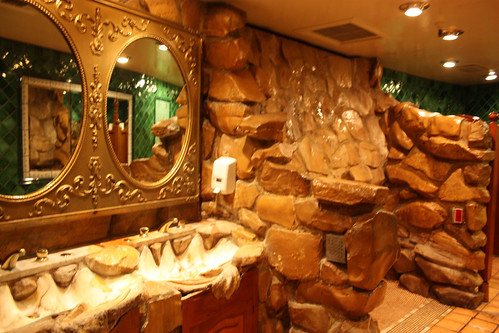 Our next stop was Pismo Beach where we were to stay the night. I had heard Pismo Beach was a lovely spot to stay, but I hadn’t booked anything until a few days before. Unfortunately by then all the beachside hotels were booked out so we ended up using expedia to get a cheap night up on the hill at the Mission Inn. Expedia somehow didn’t get the booking right and didn’t have two single beds for Sue and Fiona and the lady didn’t seem that interested in accommodating them. She sort of put everyone in a bad mood because of it and since we were all tired we all just headed off to our rooms grumpily and said we’d meet for the free cocktails later. The lady even said our room had a view which turned out to be utter bullshit since all we saw was a big wall. I’m not sure how she came to think we’d have a view when we were in the basement! 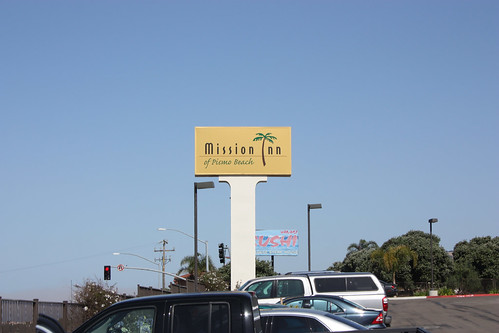 Room at The Mission Inn: 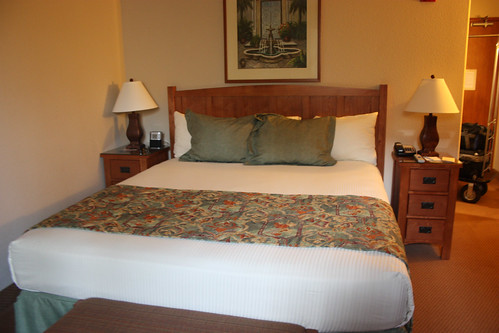 Our room was ground floor right at the back (where the white wall is). NO VIEW!: 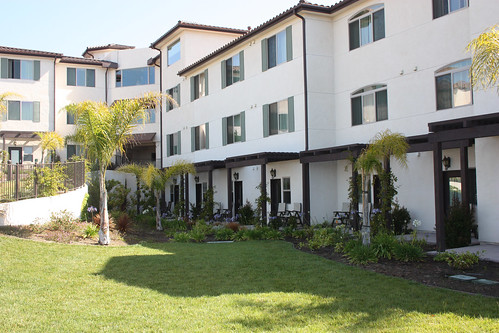 At cocktails everyone had had a shower and cheered up a bit (the booze helped) so while some of the group went off for a japanese meal nearby, Mum, Kelly and I stayed back to do the washing. It was great fun sitting there minding our clothes and by the time I got back Pauline was asleep, so I had a bath with a bath bomb and then passed out. Pismo Beach turned out to be more of a rest stop than anything else.

For Kelly’s version of events, check out her matching day blog post. (She hasn’t done one yet)