Spent the morning eating breakfast, changing to a cheaper but similar type room (with shittier tv reception) and lazing about. After lunch, around 1.30 a jumbo tuk tuk came to pick me up. It already had 4 in the truck and we were full with 9 people after visiting a bunch of guesthouses. Had to pick up some tiger food on the way – it was a couple of bags of chicken meat or something. 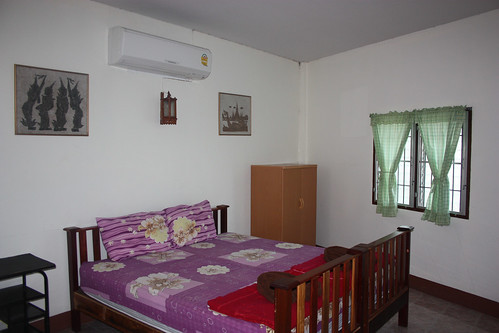 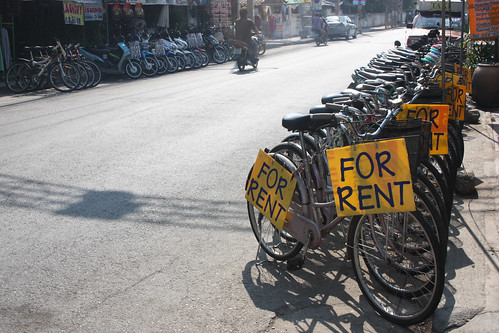 The ride to the temple takes about 40 minutes and they are right when they say there aren’t any signs to indicate it’s location – however I did see signs on the way to the jungle raft so I wonder where that was. On arrival you join busloads of people waiting to buy tickets from the one window selling them. We only really had 1.5 hours there and I was worried it wouldn’t be enough. The ticket costs 500 baht ($17Aud) and u have to sign your life away to get in. 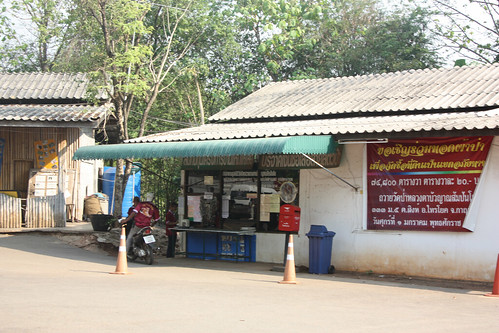 Once through the gate you see lots of red dirt, bullocks and cows, horses and deer. I walked quickly to the tiger canyon to make sure I had the most possible time with the tigers. When u get to the canyon you see about 8 tigers, a waterfall, a monk and a coverered area with seats and lines. You can choose to pay $1000 for the special photo (hold a tiger head in your lap) or lineup for the free one where u just touch it’s back. I lined up for the free one which didn’t take long to get to the front of the line. 2 helpers come around, 1 gets the camera and the other guides you to the tiger. I thought I’d get one tiger but you actually get taken to about 4 or 5 different ones and get a photo with each. There was one that was pacing and obviously no one went near that, but they took me to the one eating the tree without concern. I wasn’t brave enough to touch the one on the belly either cause it looked so comfortable lying on it’s back – I didn’t want to disturb it. It took about 10 minutes all up and I was free to go. 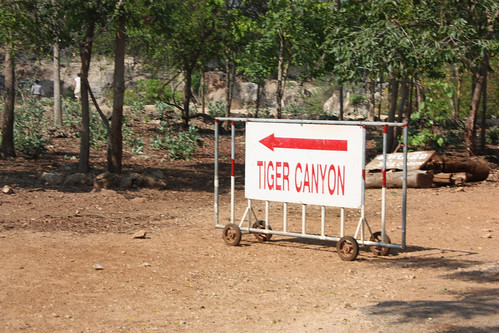 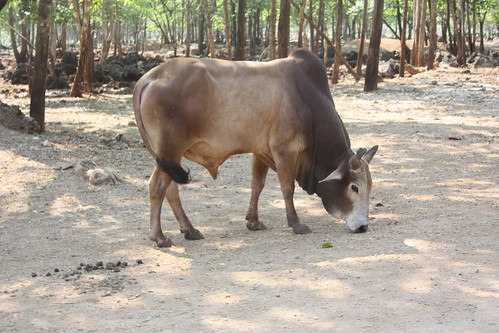 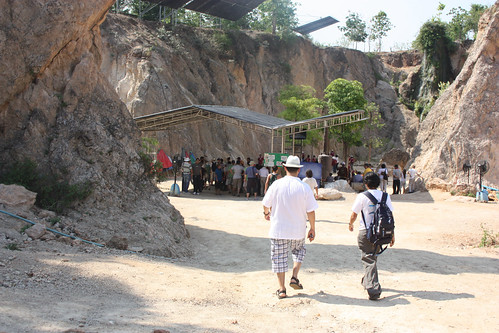 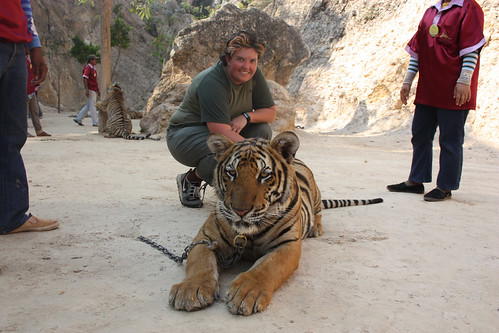 I walked up to the cubs area and saw the enclosures that the tigers had. This must have been made with the money from sales as it looked pretty new and positively zoo like. Had water and rocks for them to play in and on. It’s where they have their fun in the morning an their exercise at night. We got herded in to the cub area and locked in while they brought the tigers back. Got to play with a cub for a little bit but these guys are pretty big. After that I had to walk back to the tuk tuk to get my ride back. An Aussie volunteer was catching a lift back to town with us so I talked to her about the drugging allegations and stuff. She said it wasn’t true and that we could only get the photos taken between 1-3pm because that was when they were resting and it was the heat of the day. She said tigers were lazy and spent about 18 hrs of the day lying around. I buy that, along with the fact that these animals have been brought up with human contact all their lives so their care factor about is is minimal. 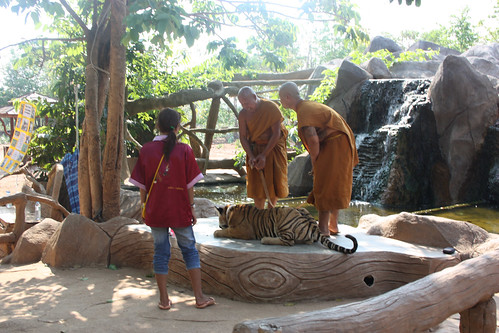 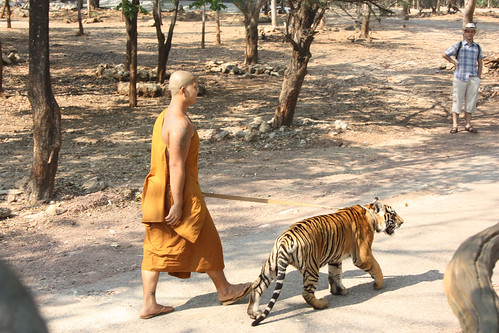 I’m conflicted about the whole thing. On one hand you have a successful breeding program and healthy looking tigers but on the other hand it’s the whole caged wild animal thing. I was expecting the worst after reading the reports of drugging and heat and stuff but it didn’t seem that bad. The issue is that there are no guides or teachers that talk about the tigers to personlise them, nor do we learn about tiger habits or how they live at the temple. It just becomes a giant pixie photo for tigers without learning anything. Maybe if the temple stopped being silent and talked they mightn’t get such a hard time.

Dropped off in town I took the Aussies recommendation and tried the pizza from the German guy down the road for dinner. Took 45 minutes and burnt the top of my mouth when I took the first bite but it was good. The guys smoking on the tables outside wasn’t good though – smoking around food is a cardinal sin to me. 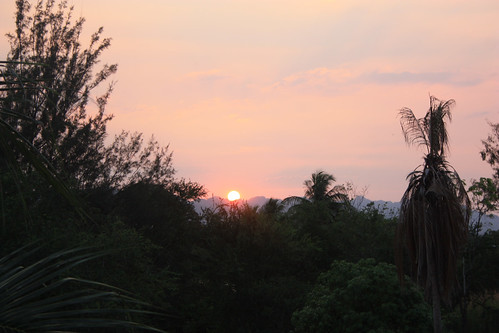 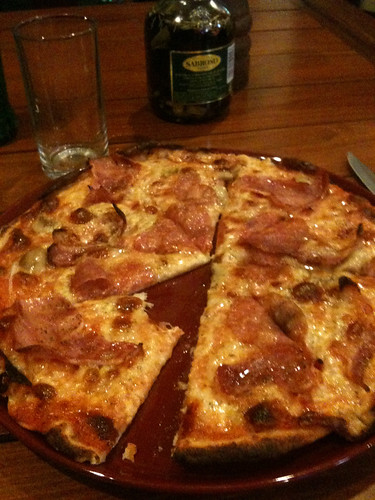 On the way back at my guesthouse I enquirered if the mini van was going to Ayutthaya tomorrow but they still didn’t know. When I had asked earlier in the day they said I was the only one so far who wanted to go so if no one else went I’d have to find a different option. That option was a local bus for 1.5 hours then a different local bus for 3 hours. No luggage is stored under the local bus and no aircon, so it wouldn’t be comfortable, but if it’s my only choice I’ll take it. 🙂

Watched Michael Douglas get a lifetime achievement award on tv (or should I say heard him and watched tv snow) and then fell asleep. 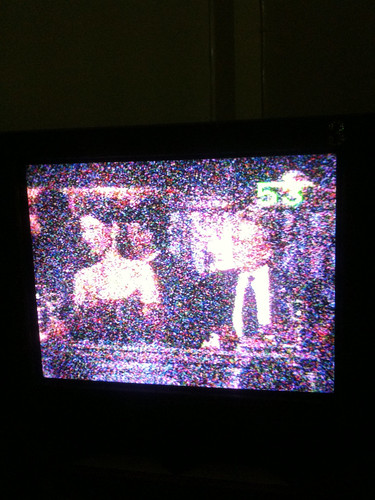