Our three day road trip actually began late on Thursday night when we left the bright lights big city for my Mum’s house on the Sunshine Coast. We thought it would be better to get a start on the journey and also take a little time to set up her newly purchased bigpond broadband. The set up of her adsl internet was actually very easy thanks to the excellent installation cd provided by telstra. I was extremely surprised at the quality of the software.

Mum had bought two mud cakes for my birthday – honeycomb and rocky road. She had a piece of the rocky road and then gave me my birthday presents. By then it was midnight so sleep was beckoning.
Rose at 6.45am to find a superb breakfast of bacon and eggs waiting that mum had provided as a surprise. After happily seeing Mum off to work safe in the knowledge that I didn’t have to go we headed off to the first stop on our fantastic journey – upwardly mobile Nambour.

It seems that they have done a tonne of renovations to Nambour Plaza, new stores, new design and even a Big W. They’ve knocked down all the warehouse type shops that were on Curry St and extended the plaza in to that. I almost didn’t recognise the Woolies where I used to work and it was odd seeing people my age who I started with were still there. Pauline and I had to wonder why all the supermarkets on the coast are bigger and better than the ones in Brisbane. I mean we are supposed to be the city!

Then we headed for Maryborough where I became a complete map bimbo. I have managed to navigate us all around California using pieces of crap maps but I couldn’t comprehend the four major streets of a country town in Queensland. In the end I gave up grumpily and just let Pauline take over. I’m blaming hormones and hope that my internal compass never gets so distorted again. We wanted to stop for coffee and cake but couldn’t find anywhere appealing enough, so we soldiered on to Hervey Bay.

Came in to town along Boat Harbour Drive and ended up at the Urangan Harbour. Liked the look of the Outrigger Resort and tried to get Kelly to book us the $99 special on Wotif.com, but some bugger had booked it since I had last looked at it. Dissapointing but the price you pay for road trip freedom man.
Wandering in to the Whale Watching booking store we overheard that there was a boat called the Whalesong leaving in 30mins and gave you lunch too! 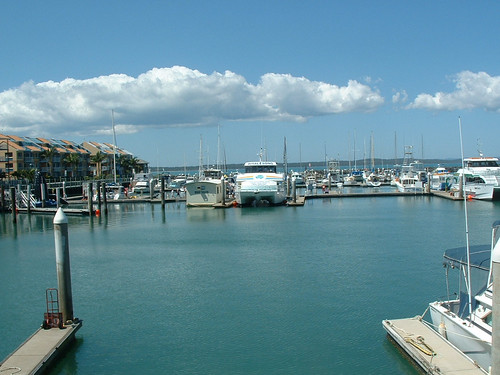 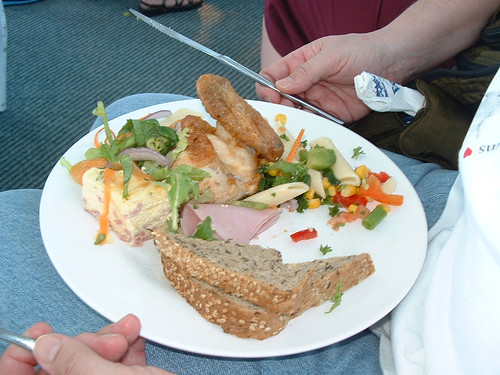 Our original plan was to go on Saturday morning, but since we are so flexible (:D) we took up the offer and the next thing you know we are motoring out of the harbour smsing everyone who was at work that we were on a whale watching boat.

Our first encouter with whales was a mother and calf sleeping. A whale sleeping is not very interesting. A whale has to think to breathe, so it’s still kind of awake. Their dorsal fin sticks out of the water and every once in a while the blowhole pops up to spurt out some vapour. 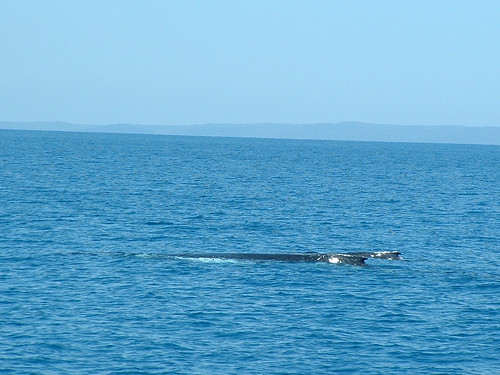 We watched the mother and calf for a few minutes while the captain of the ship kept insisting that whales can change their behavoiur rapidly. Not long after the calf woke up and started butting the mother’s chin and doing spy hops to check us out. “Mummy, wake up, someone is looking at us!” it seemed to be saying. Mummy woke up and they did a few bobs then took a dive, leaving us with a final view of it’s tail.

While they had been sleeping, one of the crew members (a lady pauline reckoned looked like Rod Stewart) had spotted some more whales far off in the distance. So we headed off in search of some more interesting whales (you know, ones that knew we had paid $80 to see some action). 15 minutes later we got to the point where we thought they had been and the captain cut the engines. The whole boat was scanning the horizon and dissapointment had set in. I know all of us were thinking “this is shit”. Suddenly we hear a noise like a breath and the next thing you know there is a giant whale swimming beside the boat with it’s calf. The mother looked like it was measuring the length of itself against the boat. 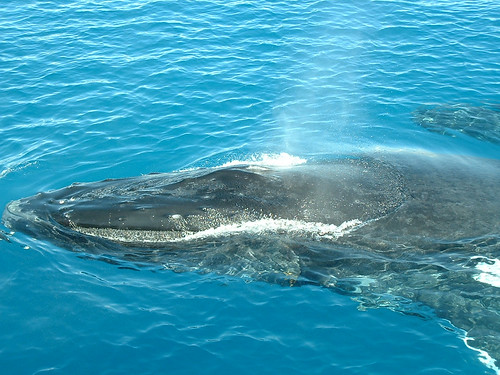 For the next hour we spent an amazing time with this mother and calf. They swam under the boat about 7 times, while everyone on the boat ran from one side to the other to watch them go under then come up. Sometimes she’d swim in front of the boat to check us out. Just when we’d think that they were leaving us, the captain would start the boat and start to move and they’d come back to visit. It seemed like they were attracted to the sound of the motor. The crew members reckoned that if we waved at the whales they’d come back and although sheepish about it we all did it. “Come back, we love you”.

The whole time the captain was going on about how rare it was that a mother would bring her calf this close to the boat. Even a few years ago this wouldn’t have happened. Bored with the boat, they seemed to disappear after a dive. We waited and searched. The next thing we see is the mums flipper kind of giving us a wave. It came from nowhere and was really funny. The captain said it looked like they were feeding.Then as quickly as they appeared, they decided to go to sleep. It’s like they have narcolepsy or something cause they just stopped and slept at the bow of the boat. 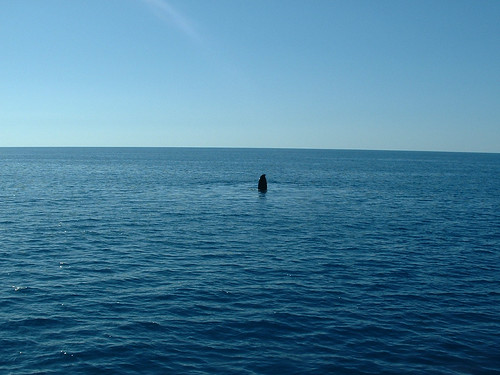 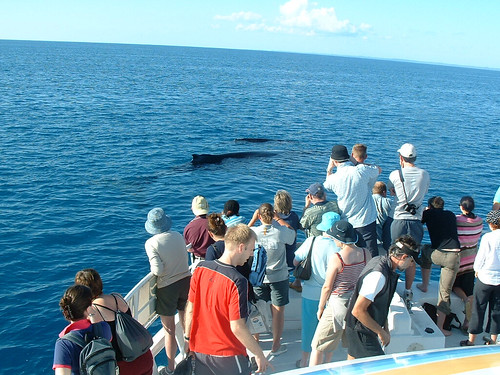 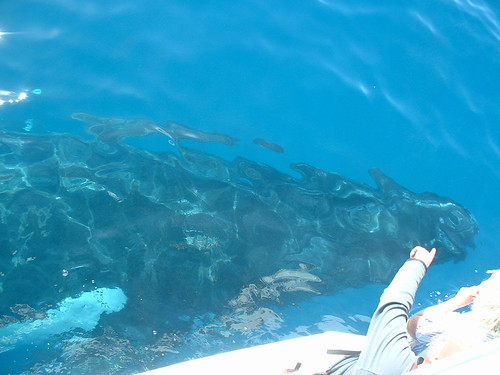 And that is how we left them… sleeping. How comfortable must they be in Hervey Bay to be able to do that. I never expected that sort of behaviour and I’m so glad that conservationists and nature have worked to create an environment like that for both us and them to enjoy. Both Pauline and I thought the money was well spent and want to do it again – next time perhaps with the underwater viewing and headphones to listen to them sing. 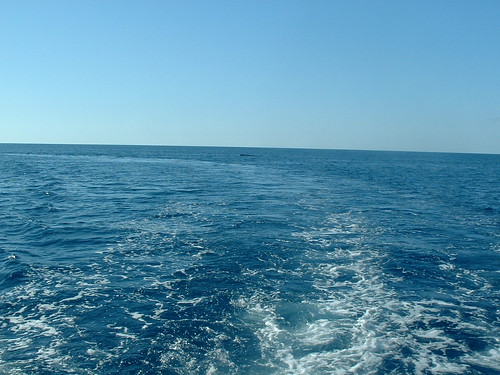 Had dinner at O’Rileys Pizza, Pasta and Pancakes based on Malcolm’s recommendation. He had been there quite a few years ago and was surprised to find it was still operating even if it had moved. Pauline had the pasta, I had the pizza and we shared a pancake. 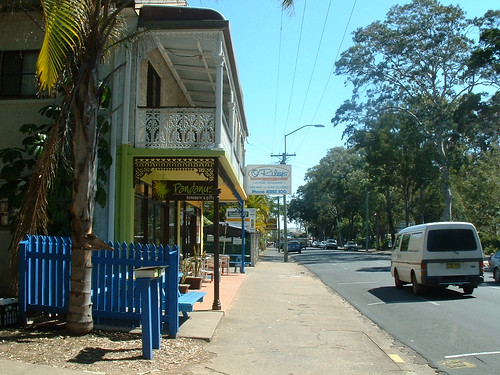 Tired and with bellies full, it was an early night staying at the Shelly Bay Resort. 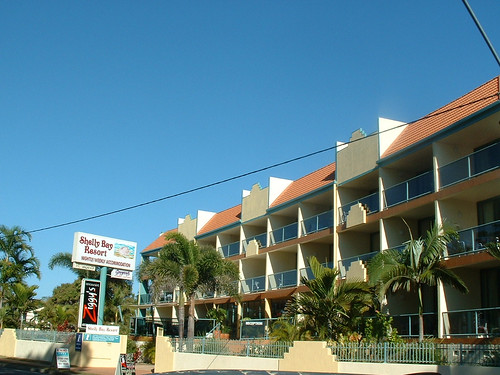