Down to another lush breakfast but on our return we discovered that they were still cleaning our room. After waiting nearby for a while we decided to go downstairs to kill some time then went back up to get our stuff. This time I was making no mistake and wearing some shorts and a soccer jersey that helped with dissapating the heat.
Our itinerary for today was to check out the China Ferry terminal, see if there are any tours to Macau and if so, try and get on it. It’s just a short walk from the hotel down Canton Road and we managed to do most of it via the shopping mall in air conditioned comfort. Once inside the terminal I was overwhelmed by the bling. Mirrors and shiny floors were in abundance but unfortunately there were no tour companies – only the ferry services. There was a boat leaving around 11.30am so we decided to throw caution to the wind and get on anyway not knowing what was in store for us in Macau. We splashed out and got the first class seats too, hoping it was worth it. 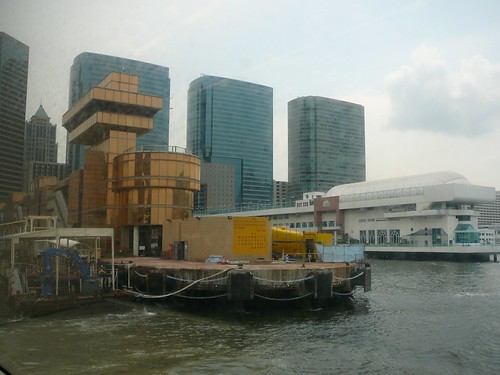 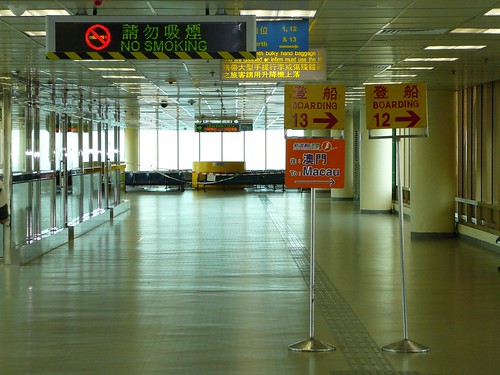 A short trip through customs, a small wait and we are on the boat in our deluxe seats. The seats are huge, leather and recline. There is a tv to watch and we actually get a meal as well. We weren’t hungry but we decided to get sandwiches to take with us but unfortunately they were already unpacked. We forced them down our throats along with the gross coffee that was provided. Of course I managed to spill the coffee down my front which left me with the horrible smell all day which is the third day in a row that I’ve smelt rank. 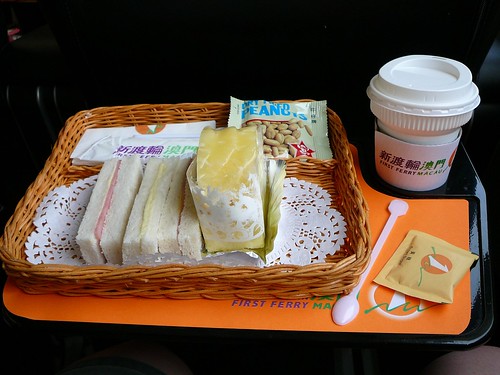 The trip took about an hour and while travelling I read that the terminal at Macau has all the tour companies so as soon as we were off the ferry I was scoping out the shops. Gray Line had tours as well as the Macau Tourist Board but we were accosted by a guy offering us our own private 2hr tour in a minibus for $800 HK. I knew that that was way more than we needed to pay so I told him I was going to get information from the other places. He followed us there too so I said I needed to go to the toilet so I could read the info in peace. Pauline was out of the loo before me but by then I decided we’d do it because all the other tours had already left. When I came out he had dropped the price to $450 so we accepted readily. Our driver was to be a woman and we were a little concerned that this was some sort of ripoff or rouse. 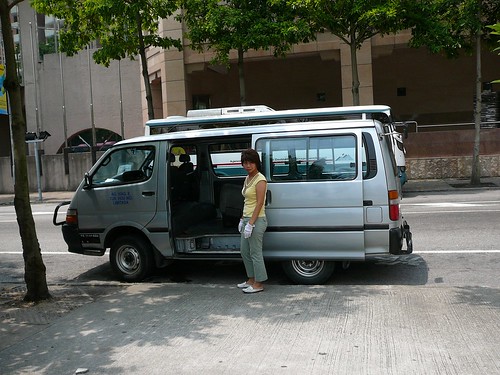 We got in the old toyota minibus from the 80s that thankfully had working airconditioning and as we reversed she managed to scratch the bus on the side. I was thinking here we go, we are going to die but once on the road she was fine – if a little slow in changing gears. Our first stop was the Lotus Flower in bloom statue. Pauline didn’t want to leave the bus so I raced over to take a picture of the statue and eventually she followed. On the way back I took a picture of the lady and car so that if we did get left somewhere we had something to show the police. We jumped back in and headed over to the Kun Lam Statue where she stopped on the two lane road and I raced to take a photo then jumped back in. At that point everything was manic and we weren’t really enjoying ourselves. She then pointed out the Macau Tower and I asked if we could go up. She sold me two tickets to go up and still not trusting her I found out that the tickets in the tower were the same price. I started to chill out after that and we headed up the tower. 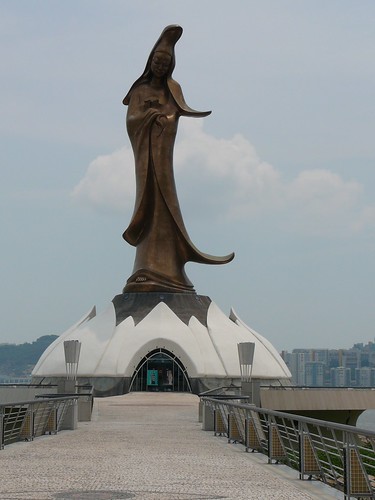 58 floors up via a 6 second elevator ride took us to the indoor observation deck. There was a lady security guard there who offered to take pictures of me (which turned out really dark). While I was posing Pauline finally realised that she was standing on see-through glass and could see all the way to the bottom. She freaked out but I missed my chance to see her initial shock as I had been waiting for that enjoyment. I love watching her get scared. 🙂 The view was pretty incredible. We went up the elevator again to the 61st floor which was an outdoor observation deck. From here you can walk around the outside of the building or even bungy jump. We didn’t have time to do any of that and headed back downstairs. 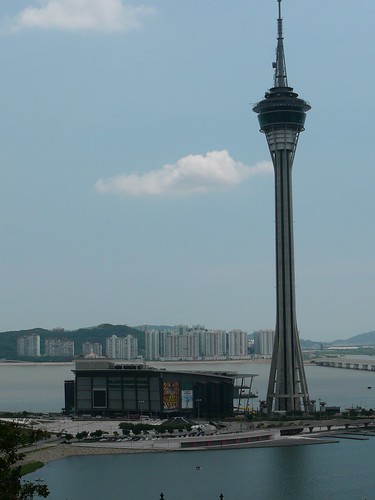 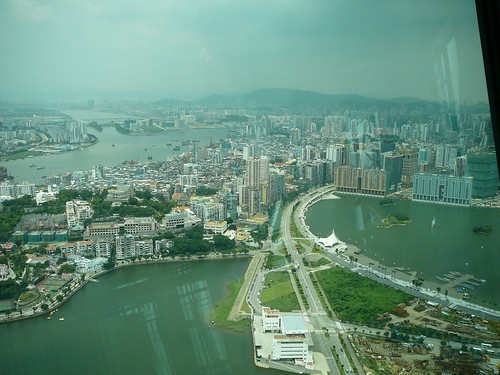 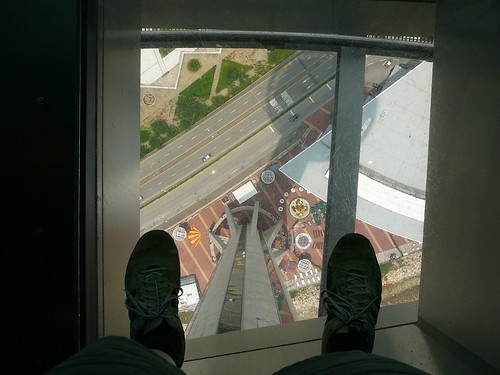 Our driver was still there which wiped away our final reservations about the tour and we were able to enjoy things from then on a little slower. She didn’t really speak english so was unable to tell us anything about where and what we were seeing so mostly we flew blind – she operated more as our personal driver dropping us at tourist places. We headed up a steep hill to the top of the mountain which was the Penha Church. This gave us another view of Macau and there were guys selling trinkets. 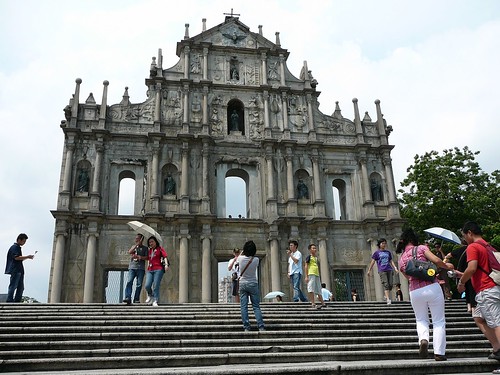 After the church we went to the Ruins of St Pauls. There were a lot of tourists there doing similar things to us, taking pictures and checking out the view. There is also a museum at the ruins but we didn’t have time to go in. I did look at the glass covered tombs outside but there was nothing in them. The view from the ruins was pretty cute and thinking back now I wish that we had more time there to explore the surrounds. Especially the square that we didn’t get to see.

Back in the old silver minibus we head in to town to get caught in a traffic jam. Macau is a hardcore scooter city but suprisingly there are few vespas there. I saw more in Hong Kong than Macau. The scooter riders there have tin lids for helmets that look like their skull would give them more protection. They dart in and out of the traffic with absolutely no fear – especially considering there are few traffic lights. They are also allowed to park on the sidewalk and cram their bikes so close together there is no chance that you could get off it. The traffic jam ended up causing an accident two cars in front of us but the first thing we knew about it was when the cop turned up. He redirected traffic, marked out where the cars had been and then they all drove off. The lady driver kept apologizing to us that we were stopped but we didn’t care – we thought it was cool. 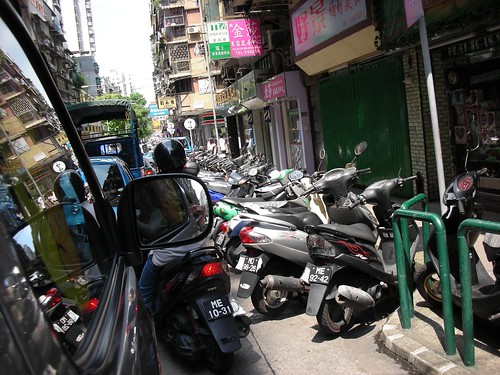 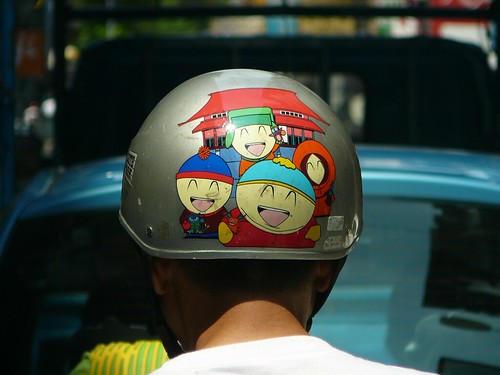 Our next stop was a temple where monks were praying so we took a few external photos and then left. The smell of inscense was nice and they had an incinerator that I presume was to burn hell money and stuff. We then drove to the border between China and Macau where people were driving and walking through to the other side. Our driver showed me her two visas which allow her in to China and back to Macau. She said that things such as shoes and clothes were much cheaper in China so she would go there to go shopping. The border was our final stop and I asked her if she could drop us at the Sands Casino so we could have a look around. She dropped us right in front and we gave her a $50 HK tip which she seemed pleased about. 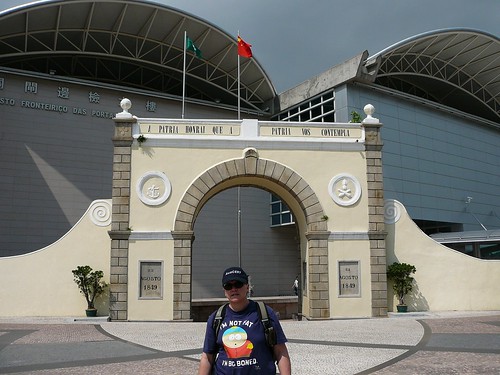 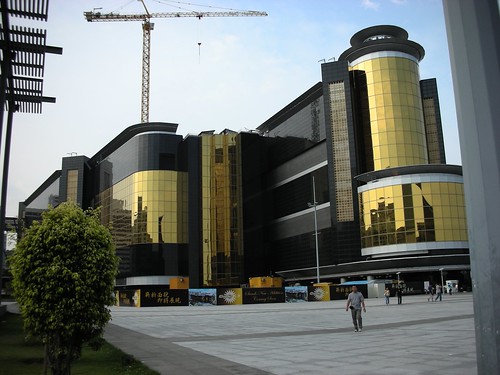 To get in to the Sands Casino we had to go through a metal machine and Pauline’s bag was checked. At this stage we were hungry so we scoped out all the restaurants. The Casino is rather huge and has the requisite smokers and roulette tables. After eyeing off the buffet we decided instead to try Macau’s KFC. For lunch both of us had a piece of Zinger chicken breast with spicy mushroom sauce and rice. For drinks we had milk tea. It was extremely spicy but definitely KFC. I wasn’t that in to the spice at that point but I can’t say it was bad. While eating we decided to visit the Grand Prix Museum so we left the casino by foot and headed towards Rua Luis Gonzaga Gomes. 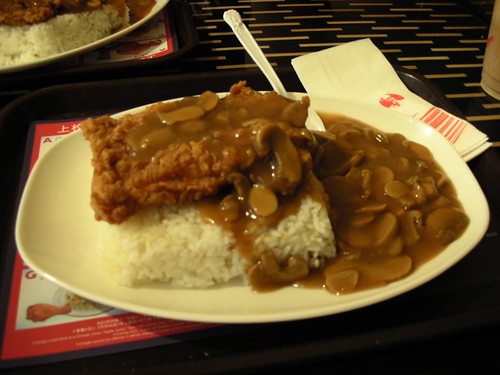 At the entrance to the Grand Prix Museum the ticket seller made fun of us behind her hand to the security guard beside her. It wasn’t exactly welcoming but I suspect a couple of big fat westerners in shorts can be amusing. The museum wasn’t much, just a few cars, bikes and a simulation game that was always in use. Since it was about $1.80 AU to get in I can’t say it was a ripoff and it did kill some time. 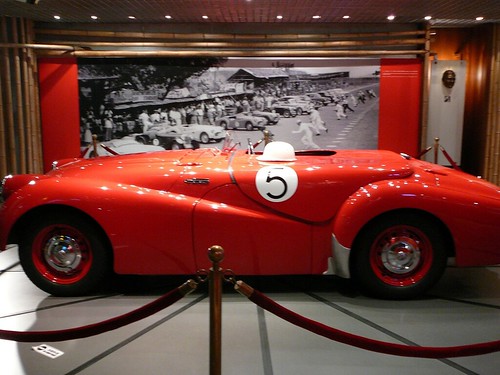 We then started heading back to the ferry, completely exhausted. We arrived at the terminal via the very theme park like Fisherman’s Wharf. It had a volcano, colisieum, arabia, venice and chinese buildings. It didn’t have much to interest us so mainly we just trudged around concentrating on putting one foot in front of the other. At the terminal we wanted to take the blue hydrofoil back but I was told to go elsewhere for the ticket to kowloon. I bought the ticket thinking it was still on a blue hydrofoil but Pauline pointed out on the First Ferry hydrofoil again. A minor dissapointment but not too big a deal. The ferry was pretty busy on the way back and this time we sat in the cheaper seats downstairs. They were still leather but didn’t recline and we weren’t fed. Pauline was concerned about how boats see at night but was a little happier when she heard it beeping it’s horn at other boats. We got back to the hotel once again in time to see the Symphony of Lights from our room. The skyline I have of Brisbane from my back deck will look pretty lame now that I’ve seen this. 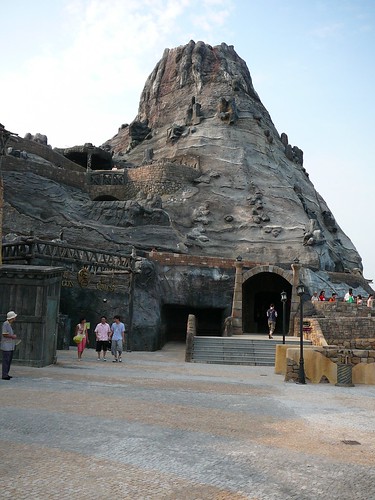 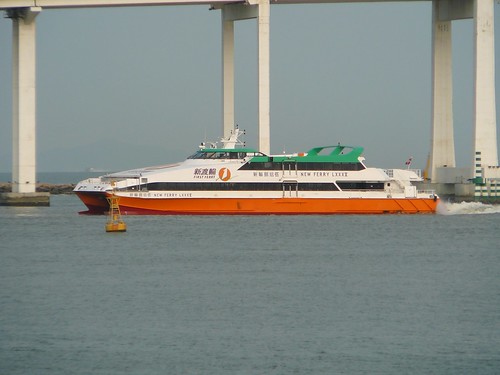