It’s hard to believe that it took us 4 days to visit the actual island of Hong Kong via the star ferry. Kowloon and the New Territories could keep you busy for weeks on end, but our first visit only involved about 40 minutes at the ferry terminal waiting to transfer to a New Ferry to go to Lantau Island. We’d already been to Lantau Island when we arrived as the airport is situated on reclaimed land sticking out from the island. This trip however was to be entirely different as we were heading towards the spiritual side of the island. 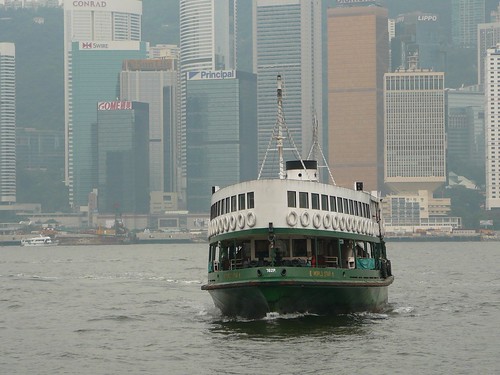 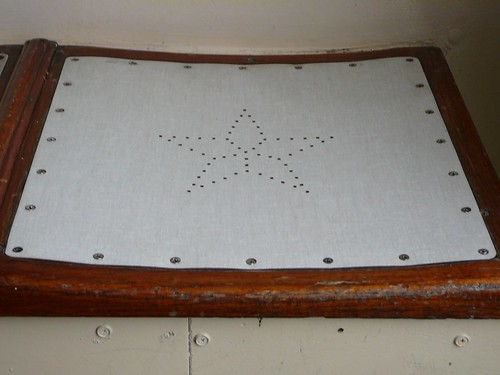 Our half hour ferry dropped us off at Silvermine Bay at Wan Chai. The ferry was like a mini version of the one that took us to Macau but it’s tvs didn’t work. We barely had time to blink before we were on bus 2 heading towards the Giant Buddha. Some Aussie girls didn’t have the right change for the bus so they got off in front of us to sort out their cash situation. A little while later they got on and sat behind us in the back seat. For most of the journey they figured out how much cash they had left and whether it was enough to get back. I was lying low trying not to alert them to the fact that I was an aussie as I’m not really the friendly type – you know how it is. While they were laughing every five seconds at what they said I was checking out the scenery outside of the bus. 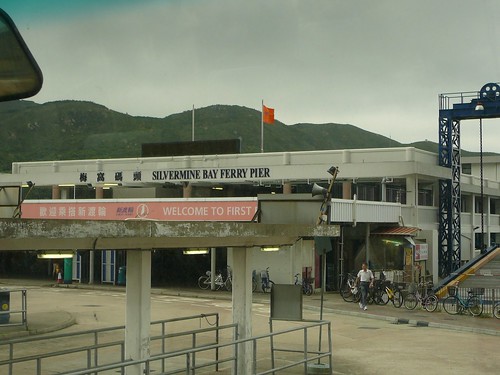 The bus ride was a long curvy affair made all the more interesting by the fact that it was raining. Not just raining though, pissing down. It was so alien to me after coming from the drought zone of Brisbane. I actually longed to be out there after the heat we’d been through over the past few days. The bus stopped at a few places to allow people off and on – the biggest group getting off at the beach. There were quite a few beaches on the island, their swimming areas are marked off by a square out in the water not dissililar to the kind you see up north to stop jellyfish from getting in. What was cool about it all though was that there was a buoy in the middle with a seat on it for the lifesaver to sit on. More effective to be in the thick of things I guess. It’s achieveable thanks to the fact that there was little if any waves.

Our first view of the Buddha was from a great distance near a lake. It shape definitely stood out from the mountains. Alighting at the bus terminal at Po Lin we were immediately struck by the largeness of it. I thought we’d have to pay to walk up to the top but the cost was only if you wanted a vegetarian meal from the monastry along with a visit to exhibition halls 2 and 3 which we were happy to pass on. The walk to the top was not horrific but it was made a bit difficult by the fact that it was still hot and humid thanks to the fact that the rain had stopped by the time we got off the bus. We did pause a few time on the way up to take photos and catch our breath but we weren’t the only ones doing it. 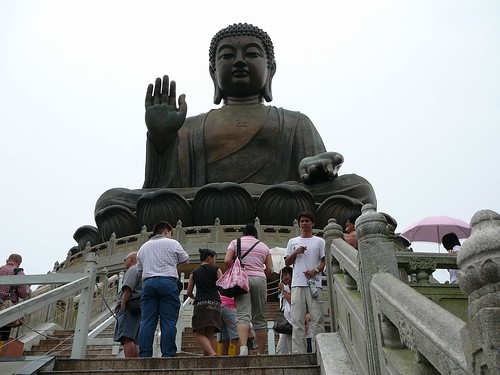 At the top near the base of the buddha there are 6 ladies offering gifts to the buddha but I’m not sure what the meaning of that is. The aussie ladies were at the top too and judging by the bruises on their backs it looks like they’d had that treatment where jars are heated up inside and then suctioned on to the body to suck out toxins or whatever. Looks really painful. The exhibition hall on the first floor wasn’t that compelling so basically we stopped for a few minutes to check out the view and then headed to the bottom again. We wandered the monastry, checked out the vegetarian restaurants (all three of them) and smelt the incense burning (which smelt better than the cigarettes some people were smoking). 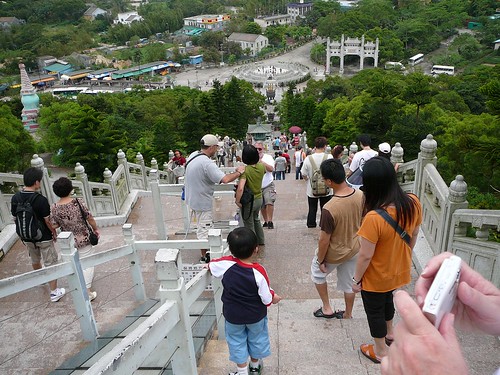 Before returning to Hong Kong we decided to visit the newly made tourist town of Nong Ping which is a short walk from the buddha. The village’s primary purpose is to be a stop on the skyrail line for the buddha on it’s way to the peak of the mountain. It had the 700th Seven Eleven in Hong Kong, a starbucks, a chopstick store and a theatre that showed 3D movies. Most of the people wandering were people who were lucky enough to test the skyrail before it opened. We wanted a ride but since it was still closed to tourists we missed out. The town is squeaky clean and feels almost like a theme park – which esentially it sort of is. I cooled down with an icy coffee from starbucks while Pauline had a bubble milk tea which we discovered later. 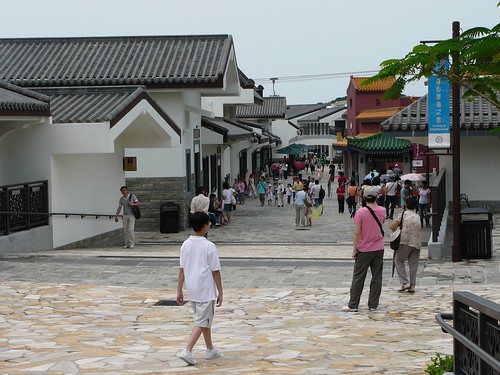 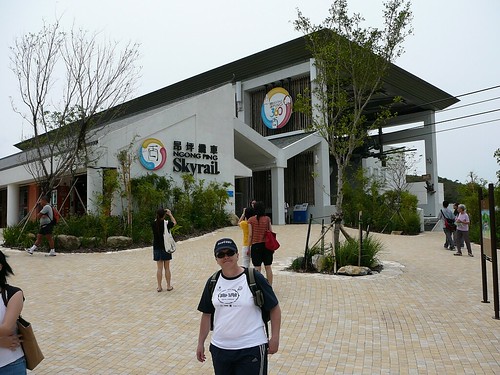 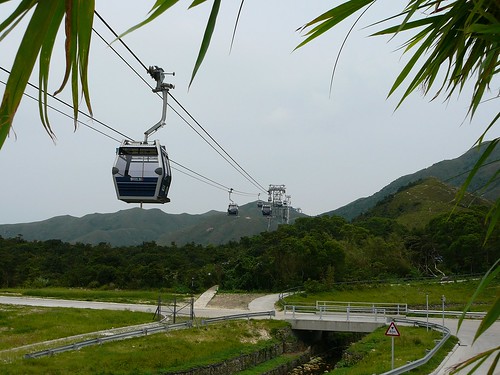 Instead of returning to Wan Chai on Bus 2 we decided to take bus 23 to Tung Chow which is the start of the line for Skyrail. It also meets up with the MTR train line which would take us back to Tsim Sha Tsui station. The ride back was fast and bumpy but Pauline was confident in the drivers ability. It was on the way that we saw some of the expanses that the skyrail covered – at one point it crosses the South China Sea without any towers in the middle. Pretty impressive yet scary. At Tung Chow we alighted from the bus straight in to what will soon be an excellent shopping destination. A shopping centre specifically for outlet stores. I had fun drooling in the adidas store but didn’t end up buying anything while Pauline also came out empty handed from the Calvin Klein store. The train ride back to the hotel was pretty uneventful.

We killed some time in our hotel room recovering from our day (our feet were pretty sore by this point) and decided on dining out in style at the french restaurant in the Marco Polo Gateway hotel which was the hotel beside ours. Pauline enjoys french cooking so this was her little indulgence. We were waiting at the door at 6.30 when it opened and were the first customers inside. Pauline ordered escargot while I went for the Terrine of Duck Foie Gras. While waiting we munched up the bread and dips as we were starving by that point. My foie gras was nice, but Pauline’s escargot was delicious. She was lucky enough to get twelve of them with garlic. I sopped up some of the leftover garlic butter swooning the whole time. For the mains I had the Turbot Steak with spicy sausage while Pauline ordered Pork Chops. She was on to her second glass of wine by that time as she was enjoying it so much. She had suggested to me to have red wine with my steak but I went for avian water (I had no other water choice). When my dinner arrived I was extremely dissapointed to learn that turbot steak is actually fish. I am certainly not the biggest fan of fish and felt a little ripped off because the meal was pretty expensive. I didn’t want to send it back though as that would expose my stupidity and I thought I should give it a chance because it might change my mind about fish. It didn’t and I felt hugely dissatisfied. I’m sure it would be lovely for people who like fish but I just felt sick the whole time I was chewing on it. The sausages were nice though. To pick up my spirits we ordered a warm chocolate pudding that was really great. I had a heartattack when I saw the bill so we charged it to our hotel room. Overall I felt the whole experience wasn’t worth the money, but Pauline enjoyed every aspect of her meal and that was what is important. On the way back to the room we did some more browsing of the huge shopping mall but once again bought nothing. 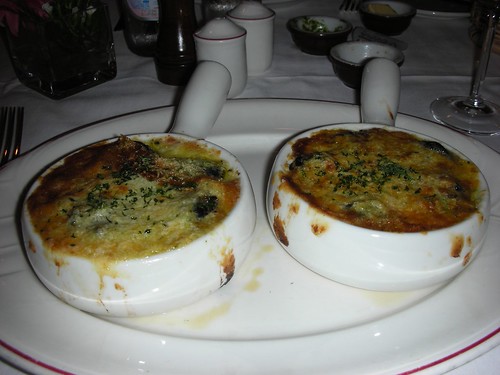 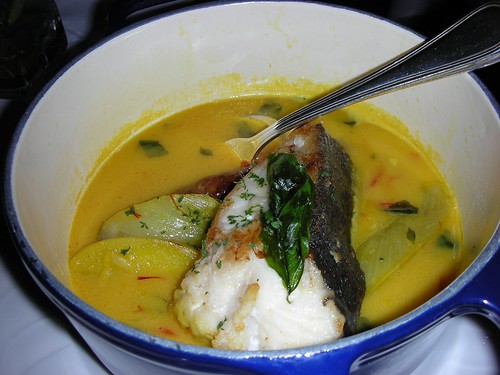 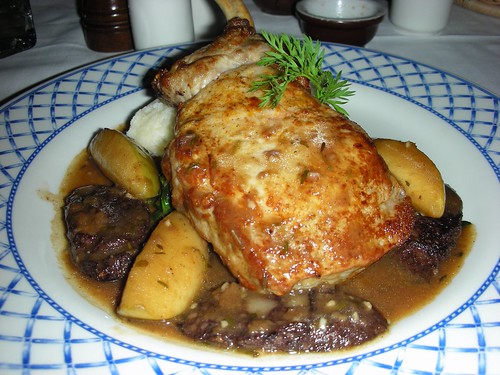 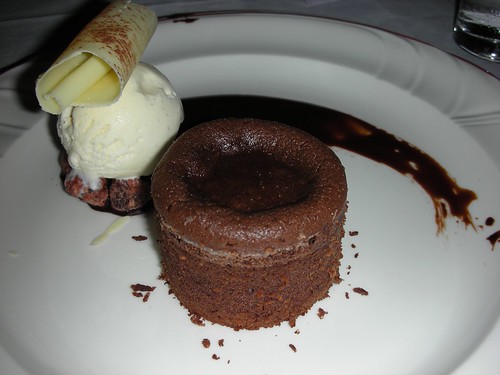