Another ride on the star ferry – this time upper deck again (always upper deck for me now baby!) and then a walk to the peak tram. You can catch a bus there but I figured the best way to see a city is to walk. The only problem was that I was a little bit stupid because we were walking to something designed to go up steep hills, so of course you are going to walk up at least a bit of a slope to get to the terminus. My advice is to catch the bus up and walk back if you are starting at central or the star ferry. By the time we’d walked up the stairs and the slope of battery path we were huffing and puffing like maniacs. That’s what you get for being unfit.

The entrance to the tramway was nothing like I expected, I guess because it started in 1888 I was thinking there would be this grandiose entryway or at least something decrepit. Instead it seemed like it was at the bottom of a highrise and was like any old entryway to any new tourist attraction. There was a tram waiting at the bottom for us so after swiping our cards we walked up, realised it was virtually full and decided to wait for the next one. After standing there like dickheads for a while we figured it may be a while for the next one as there was only one rail line so we got on and sat apart.
I suppose the curves in the walkway on the tram should have given me some hint to how steep the ride was but it was crazy steep! I’m thinking Katoomba railway and it’s turning out like the tram is virtually repelling up and down the mountain like a mountain climber. Another way to explain it may be when you see astronauts strapped in to their chairs sideways for takeoff except that we weren’t strapped in! I really enjoyed the trip up. No wonder they laughed at the guys who suggested it, it would have been a mad idea but it is hell cool.

I wasn’t expecting that there would be stops on the way up either and there were a few hong kong people who actually used it for transport – it’s not just for tourists. At the peak (which isn’t quite the summit) there is a huge anvil shaped building that is easy to spot from all over hong kong. It’s about 5 floors with escalators that take you past shops filled with watches, souvenirs and the requisite coffee shop to finally reach the outside where you can soak in the view. This was the first time in 3 days when there wasn’t too much haze so we took advantage of it by taking a load of pictures. It’s pretty awe inspiring and gives you a great idea about how active the city and it’s harbor is. 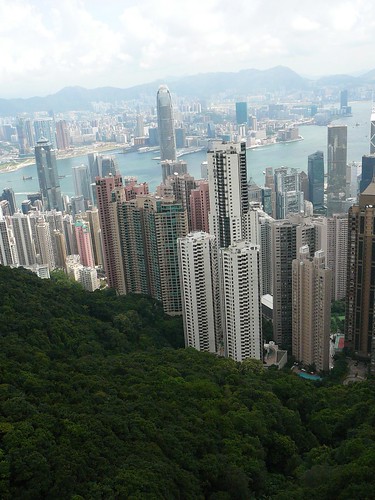 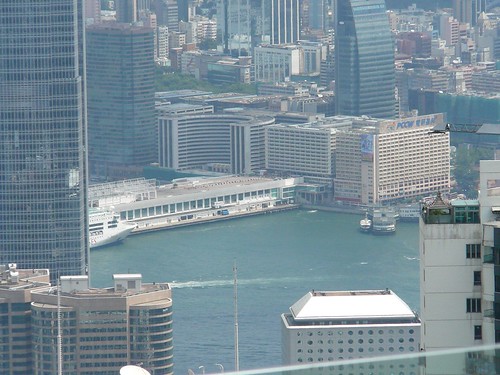 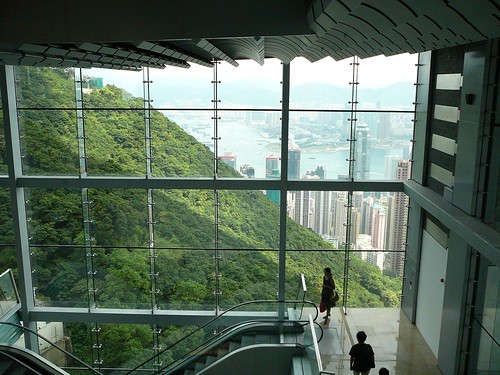 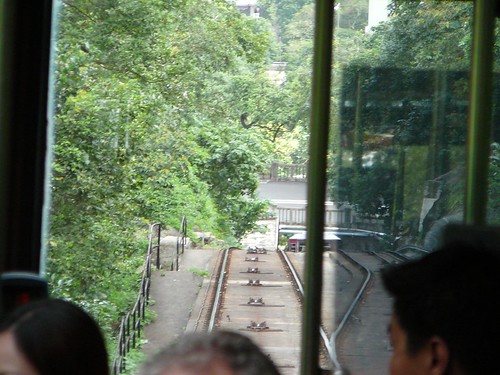 Back at the bottom we got on a double decker bus that took us to central. We had to find the bus terminus which turned out to be a little difficult as the signs were a little obscure which was the first time I’d experienced that in Hong Kong. We waited at the end of a very long line for bus 6 to go to Stanley Markets, disappointed because they say the best seat on the bus is front seat on top when you are visiting Stanley. A few seconds later the 260 bus stops nearby so I take off knowing it’s going to the same place and for the first time in days my luck is in and we get the best seats on the bus!

The appeal of the bus journey is thanks to the winding turns which eventually expose you to the wonderful site of Repulse Bay and it’s interesting high rise buildings and beautiful beach. You know it’s meant for the glitterati of Hongkers because they have a maserati dealership overlooking the sea. For those in the cheap seats, get off at the deepwater bay beach because you can afford to swim there. Those with their Bentleys are free to swim in their chanel custom togs at Repulse. 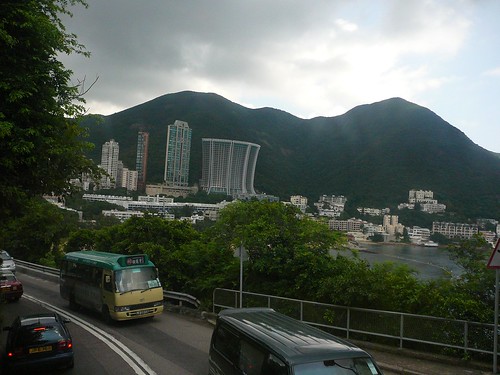 Stanley is the town after Repulse Bay but it doesn’t have much of a beach near the markets. They are in the process of creating a wooden walkway along the edge which will make it a great place for outdoor dining and romantic strolls. The markets themselves are how you imagine a hong kong market to be, full of souvenirs, clothes, shoes and chinese silk pyjamas. The bargains on offer weren’t anything that would make you go wild but they were pretty good value. I bought some t-shirts which were supposedly “hand screen painted ten times” but whatever. Pauline did some no bargaining with a lady to get some reading glasses for about $10AU. We didn’t go mental with the shopping, we were kind of tired and almost going through the motions. 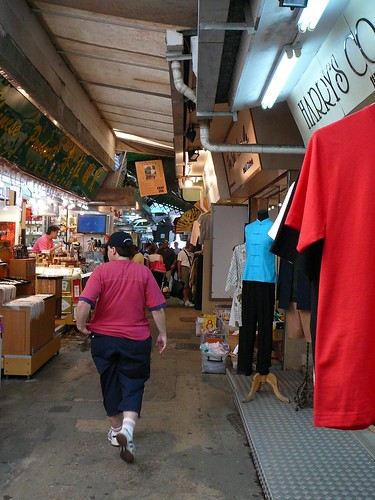 On the bus back we got off in Causeway Bay which was on the way to Central. The intent was to head towards Times Square but as it was a little too far for our tired soles we took one of the Hong Kong trams that cut through Henessey Street. You only pay when you get off and it’s $2HK no matter how far you are going. They were kind of dirty and neglected, I don’t think they get the kind of care and attention that the San Francisco ones get. What was cool about it was that it was double decker but we stayed down the bottom cause I wasn’t sure how far it would be before we got off. 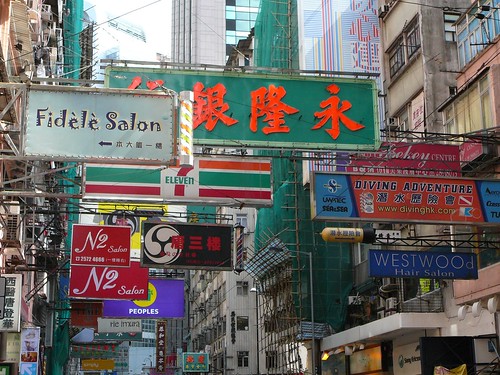 I was starting to fade so it was time to lunch and we decided to celebrate it in style with an expensive lunch at Hong Kong’s version of McDonalds called Cafe De Coral. Purchasing food at Cafe De Coral went like this: 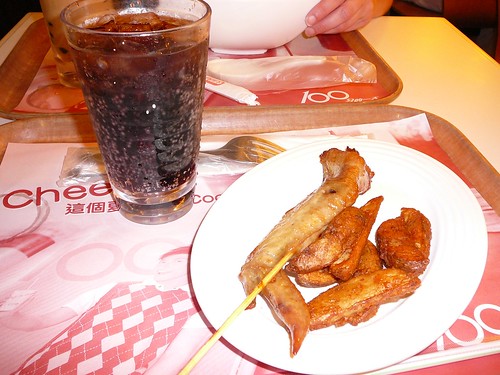 It was an incredibly manic experience as the store was very busy along with the staff and I just felt like I was stumbling around in the dark. It was the only time in Hong Kong that I felt out of my depth and I’m surprised that it was in a fast food restaurant. I got all the looks that people give when things they do with ease are made to look difficult by a foreigner. It’s kind of like going in to McDonalds and being surprised when they ask “Do you want fries with that?”. But I was so glad I did it even if the food wasn’t that great. What do you expect for something that costs $4AU?

We walked around the Times Square shopping centre for a while and decided that it was pointless so we got in the lift to go back down. There were already about 5 people in the lift, then it stopped at the next floor and more people got on. It then started going back up again, because even though there were eventually ten of us in the lift – not one of us had pressed a button – any button! to get to ground. We all started laughing and I said “How can so many people be so wrong?” Which got a giggle out of some of the other tourists.
To beat peak hour we took the train back to the hotel and rested a while. To get to the Causeway Bay station from Times Square you have to walk down some really long sloped tunnels which I wouldn’t have wanted to walk up. At the hotel I had my second swim which was great once again but this time Pauline piked and just read by the side of the pool. 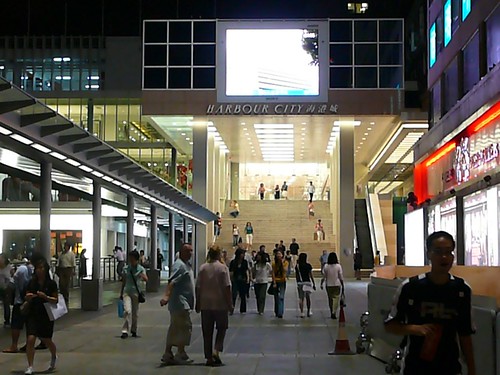 For dinner we had a shitty hamburger and chicken pasta at Dan’s Chicago Bar and Grill which was in the hotel complex – really don’t recommend it. We then staked out a spot for the Symphony of Lights which is on every night at 8.00pm. This was the first time we’d seen it from the harbour so we had the whole experience with music and everything. Unfortunately the narration was in a language I didn’t understand so I just watched the lights twinkle and took videos and photos. When it was over we took a walk down the Avenue of Stars where the only stars I recognized were Jackie Chan and Bruce Lee. A cold lemon tea was bought at the pacific coffee company which helped me make the walk back to the hotel. We were reaching travel tiredness point by this stage so were almost glad that tomorrow would be our final day. 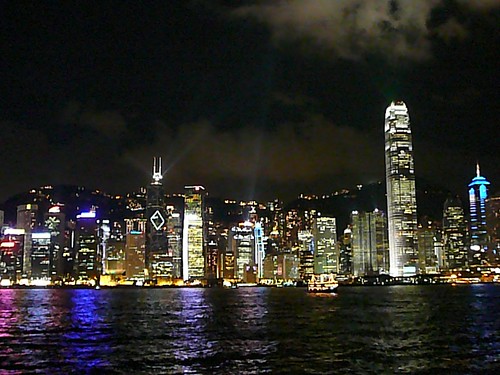 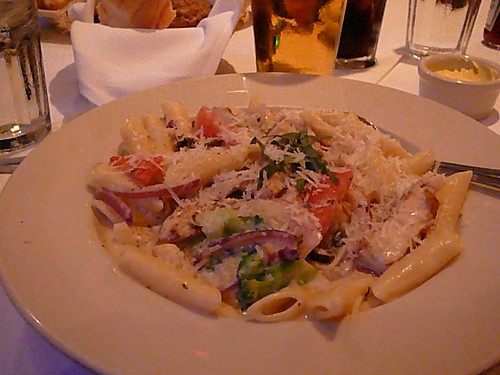 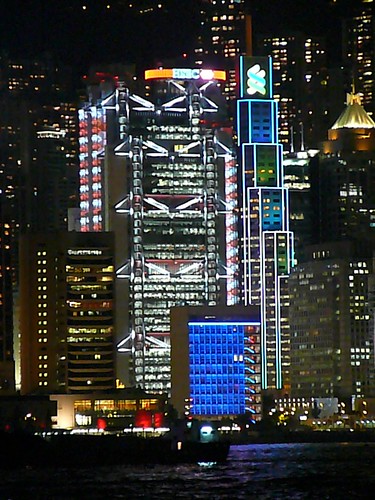 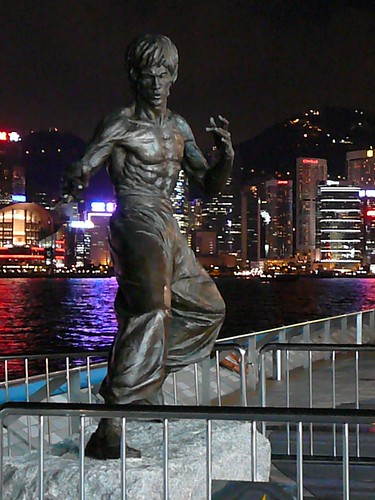