Today was our final day in Hong Kong which meant a trip to Mongkok to buy all the things we hadn’t bought on our first trip there. It didn’t start well with Pauline feeling ill so she couldn’t take advantage of the last buffet breakfast and only munched on cereal. Her mild sickness meant that we took a bit longer to get started and didn’t leave the hotel until around about 10.30am. I guess the fact that the train was empty should have been a hint as to what would greet us but we were too busy enjoying sitting down to think about it all. We knew that they didn’t open the stores early in the morning but on this particular day the stores didn’t start lifting their steel doors until 11.30-12.00pm. 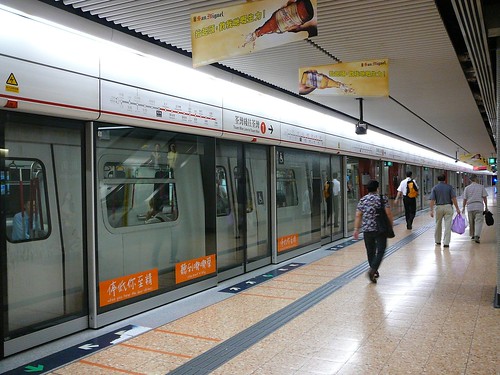 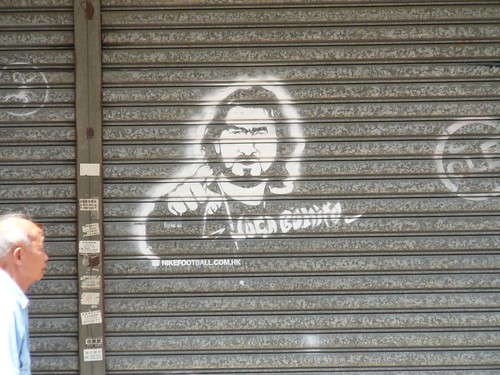 This delay meant that we had to cool our heels on the hot sidewalk or killing time by buying some clothes in Giordano and sipping a cold coffee milkshake very very slowly in the Hagan Daas ice cream shop. For Pauline all this was pure agony but since we had come all this way she wasn’t about to give up seconds from the prize. Pauline had spotted some green adidas shoes on guy on the train earlier in the week which I had seen in a store in Mongkok. Of course this store had to be the last store to open and we set about trying on our favourite shoes. The display shoes out in the store are actually wrapped in plastic which I suspect is to stop people trying it on or getting it dirty. Pauline and I both liked the green irish leprechaun shoes and for a while there we weren’t sure who’d end up with them but in the end I gave up because I had other shoes to bond with. I ended up with two pairs but if we’d have had more cash I would have bought more. The two I got were the “I love Moscow” and “I love Rio” gazelles. The best thing about waiting for that store was that it was actually $50HK dollars cheaper than every store in the street. 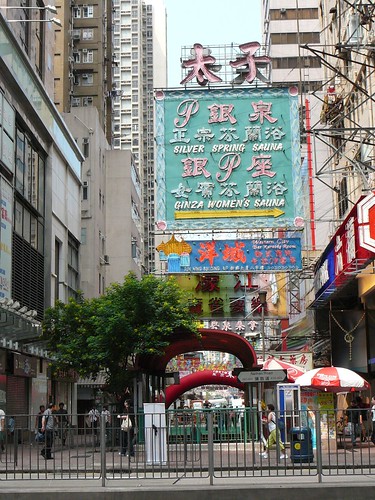 As soon as we’d made the purchase we struggled back to the hotel where Pauline passed out in bed and I had a bath. I don’t know whether it was because it was the last day or that the heat had gotten to us but we were certainly operating at half pace. After my bath I headed downstairs to the department store and purchased some perfume. On our walks around town we’d had the chance to smell quite a few bottles of perfume and I ended up deciding on some DKNY be delicious and some Paul and Joe perfume. I then headed back upstairs to see how Pauline was but she was still in bed feeling ill. This nixed our idea of having high tea at the Penninsula hotel because it wasn’t worth it if she couldn’t enjoy it. Instead I went out and got a takeaway french dip sandwich from the Main Street Deli around the corner. Apparently it is the nearest thing to a New York Deli outside America so was really surprised to find this art deco restaurant with chandeliers and a lady cleaning the marble walls. Once again the takeway meal had incredible packaging – even had a doggy on the bag. I don’t know what I was expecting with a french dip sandwich but it turned out to be a steak sandwich that came with french onion soup that you dipped the sandwich in. Totally unique and yummy but messy and I’m not sure I’ll have a hankering for it again. 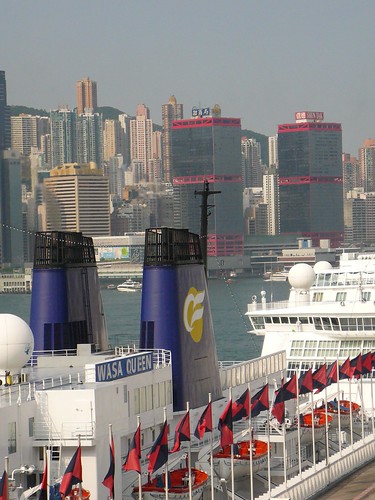 Ok, I’m really struggling here because it’s hard to blog about something as uninteresting as us lounging around our hotel room taking our last chance to look at the view . You are supposed to recover when you get back from holidays but Pauline’s illness forced us to reign it in. To sum up our final hours in Hong Kong, I’ll provide you with the notes I wrote the day after:
Packed our bags at 5, checked out and walked to the doc martin store to not buy doc martins
Back in the lobby we waited for an hour then I freaked out a little afraid that we would miss the bus. I kept annoying the concierge because there was another bus at the same time (which I didn’t realise) so I was afraid we weren’t on the list
The bus ride gave us our final view of the hong kong lights, the docks and the grand expanse of cloned high rises in the new territories.
Hong Kong Airport is the best airport i’ve ever been in. Huge, organised, no lining up for qantas, tonnes of shops and easy to fill up the time waiting to get on the plane 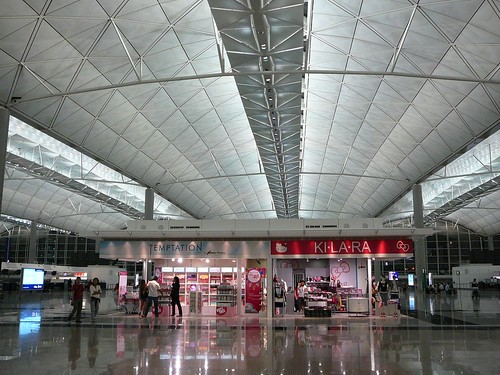 thunderstorm, rain
seats near the ones we sat on on the way over, but not as much space. i had window seats but the headphones only worked in the right ear. wanted to move to the same seat i sat on on the way over but wasn’t quick enough and the lady had spread out. pauline kindly swapped as she was going to sleep. I fell asleep to da vinci code, woke up and watched nacho libre which was cool. sleeping on a plane is painful and i decided i prefer day flights because you don’t have to sleep.
back home it was cold and windy which was a shock to the system.
Tomorrow I’ll do a summary for the people who can’t be arsed reading the long posts (and probably haven’t got this far).
For more pictures check out the Photo Gallery.