Since we missed our chance to get up high the day before at the Tokyo Skytree we thought we would try the free view from the Tokyo Metropolitan Government Building (aka Tokyo City Hall). But before we did that, I needed a coffee and an egg slut.

The coffee was in the hotel room and brewed in an awesome container which I can only assume was designed by someone extremely cool. Behold! 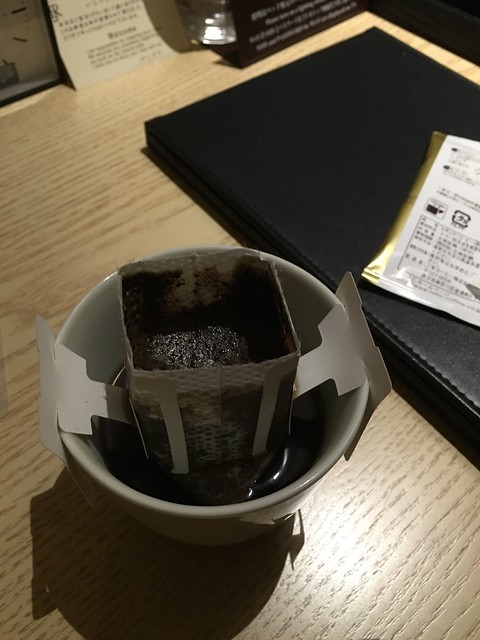 The egg slut? Entirely different event. Claire and I walked over to the Paul Bassett coffee shop which is near City Hall. Paul Bassett is an Aussie barista who won the World Barista championship at age 25 and also designed an espresso machine with Sunbeam. Before you call me a douche for not going to a japanese breakfast location, I will try to defend myself by the fact that he doesn’t have any coffee houses in Australia (that I know about anyway) and I don’t know of any stores that would serve something called an egg slut. Behold! 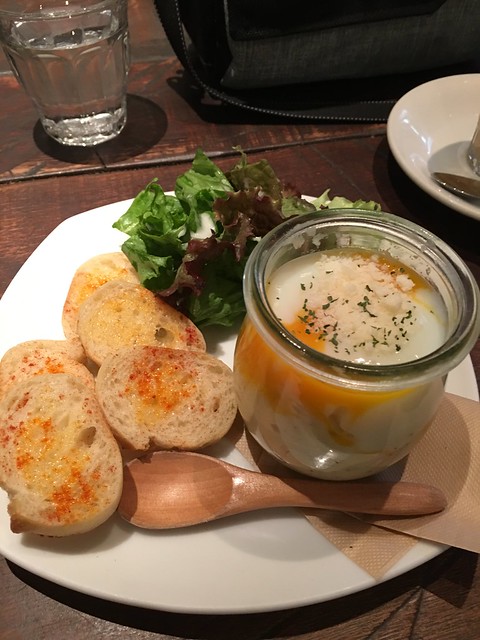 Basically the egg slut is a californian invention by a store called EggSlut. It’s a coddled egg, potato puree and some coarse grey salt. It’s like a pimped up poached egg and it’s great. The wooden spoon was also a nice touch.

After finishing we headed over to City Hall, where we saw a love to rival Philadelphia 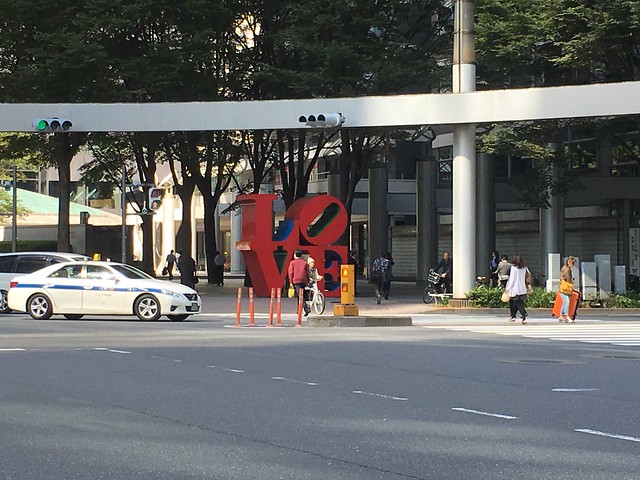 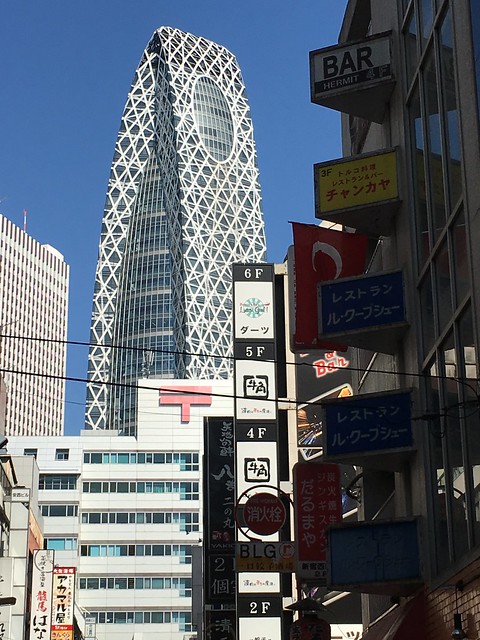 And the Tokyo Metropolitan Government Building, which looks a bit like a Robot claw. But maybe my mind was still on the robots from the night before. 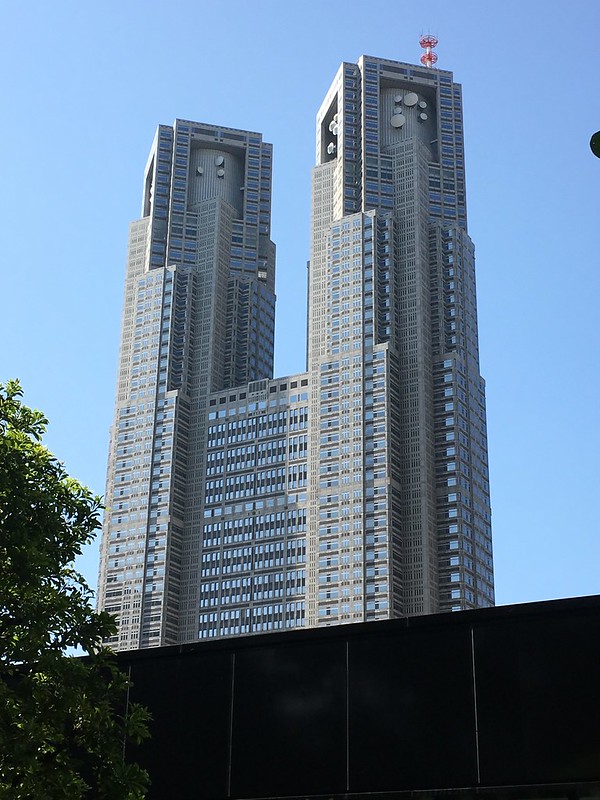 The view from the tower was pretty good, but I suspect it may be better at night. 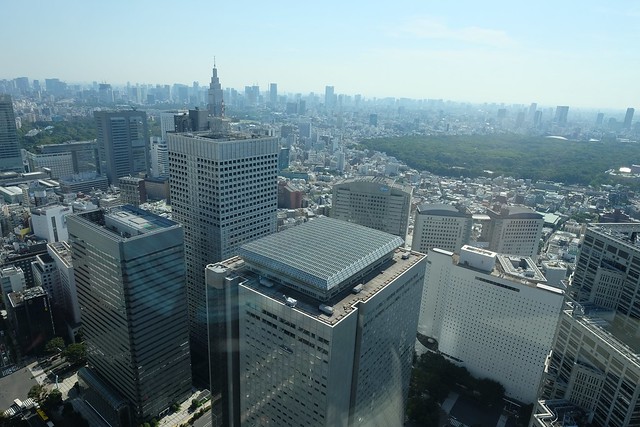 The inside was a little bit retro cool. 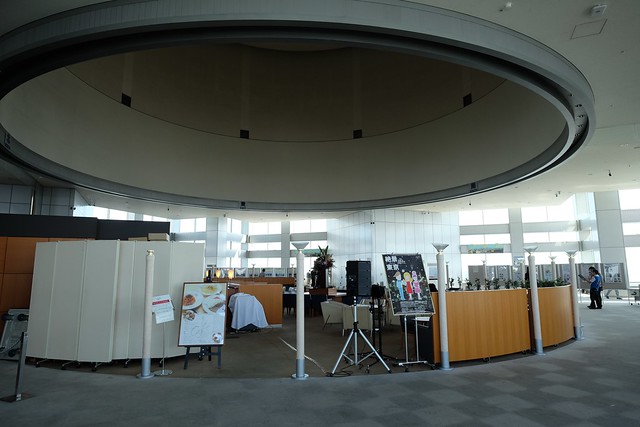 After getting our fill of photos, we hopped on the train to Ginza which is an upmarket shopping district and not just a chain of japanese restaurants in Australia. Mainly we just strolled down the street gawking, but spent a fair bit of time in Itoya, where I found the most beautiful backpack but didn’t take a picture of it. It was perfect for carrying a laptop, but it also had space for weekend clothing and a bag that zipped off for toiletries. I’ve tried their website, but I doubt I’ll ever see that bag again. Either way it was multiple floors of lustworth items. 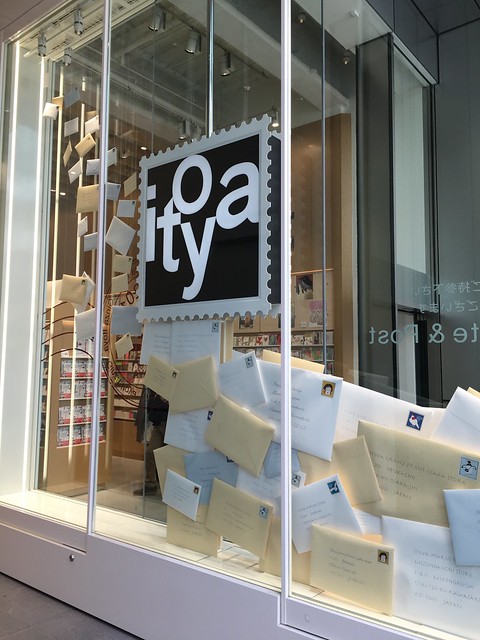 After shopping, we found a place to eat which has become a source of stress for Claire. She isn’t the biggest fan of asian food, so every meal is risky. This place delivered enough for her to get sustenance and I thought it was great even if neither of us were feeling adventurous. 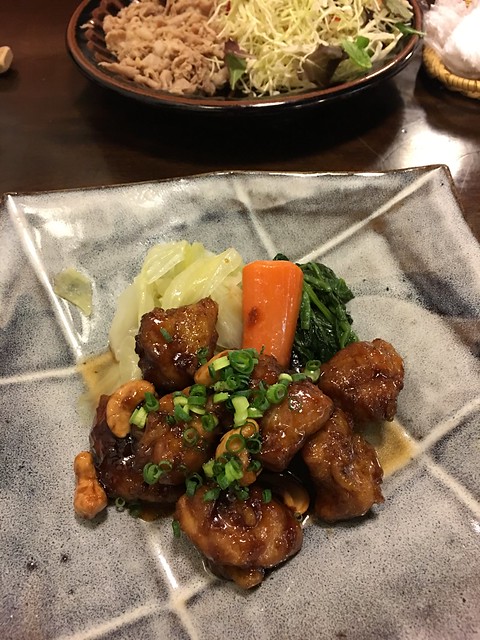 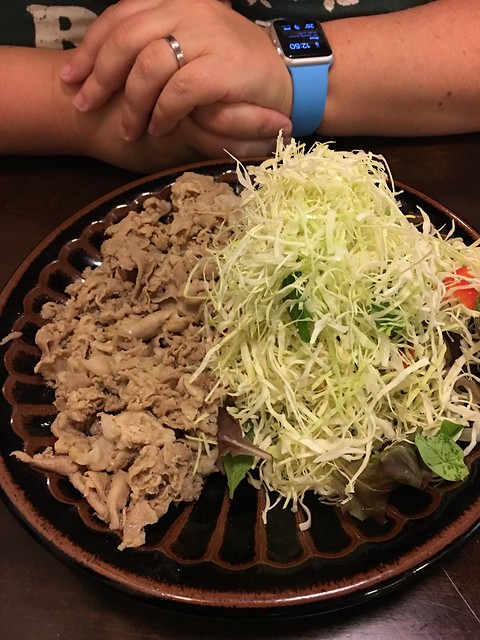 Once again on the train, we headed over to Edo-Tokyo Museum and got off at the Ryogoku station, which had these cool Sumo pictures at the exit. 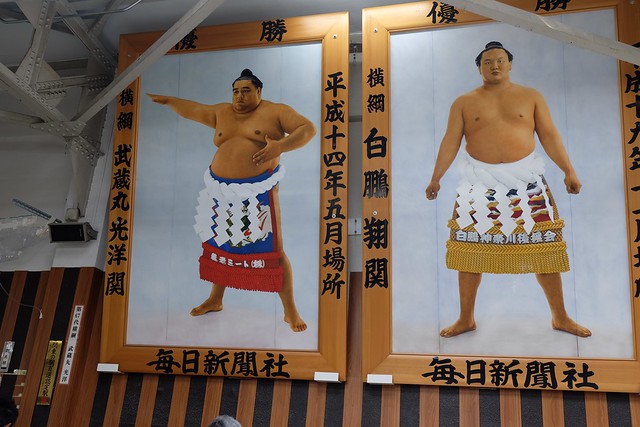 And this strange looking Sumo who didn’t need any more fish. 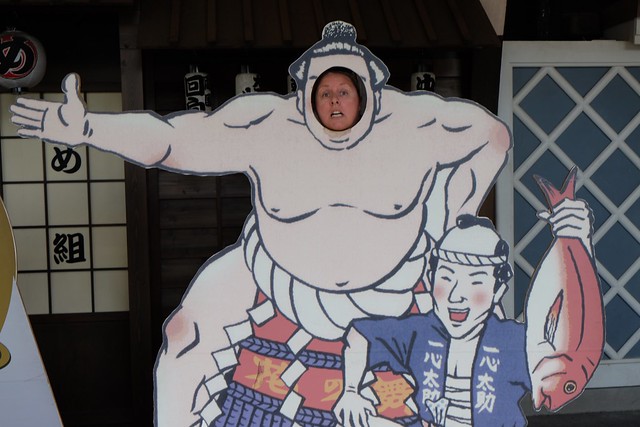 The Edo-Tokyo museum is a really cool interactive museum that shows you what Tokyo would have been like when it was called Edo and full of ninjas, shogun warriors and monkey magics. As an added bonus, you also get 19th century Tokyo as well. Even the building it’s in is quite unique 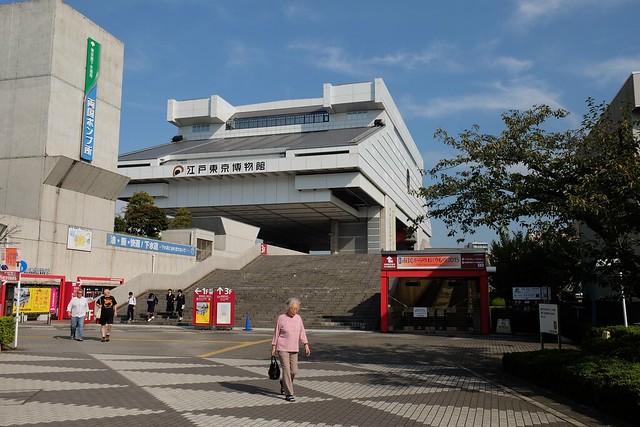 I made Claire pose for this photo, which she was not pleased about, but what I didn’t realise was that she was going to pick it up – in my head I assumed she was just going to emulate, but she was strong enough to try. Unfortunately, she also hurt her back doing it, which wasn’t in the plan. I think the photo details the exact moment she broke herself. I’m still sorry Claire! 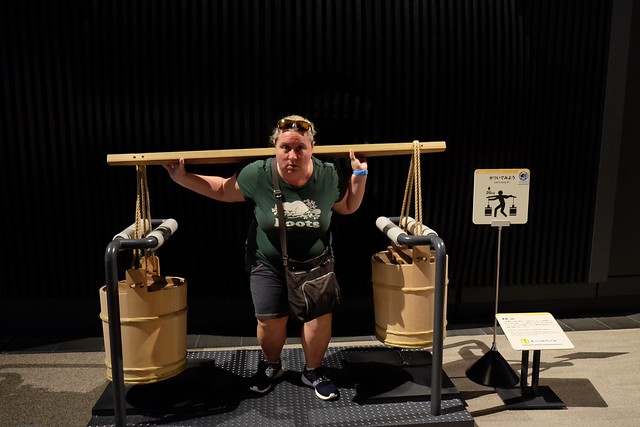 I always love seeing retro kitchens in museums, it’s usually the exhibit I spend the most time at. I don’t know why, as I am barely in the kitchen at home. 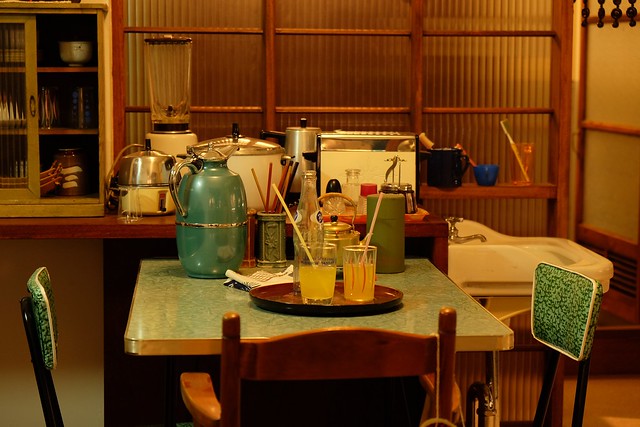 Can’t have a museum without a queen 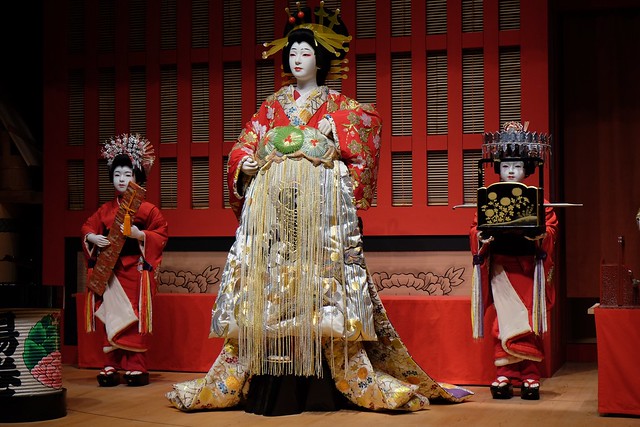 or a man sitting on a chair sleeping 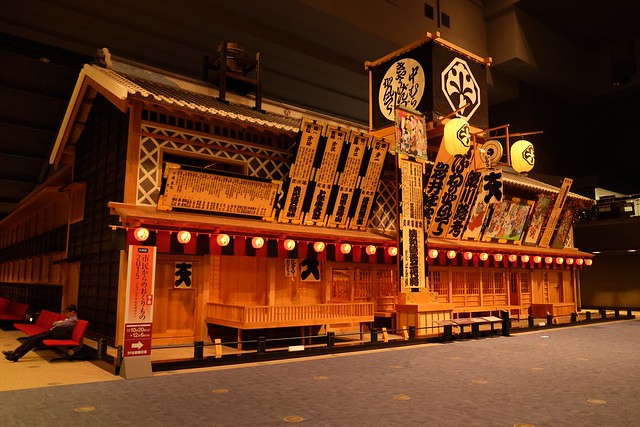 After the museum, we were completely knackered, but we continued on.. because there was no way I was leaving Tokyo without going to Akihabara. Hai! Hai! 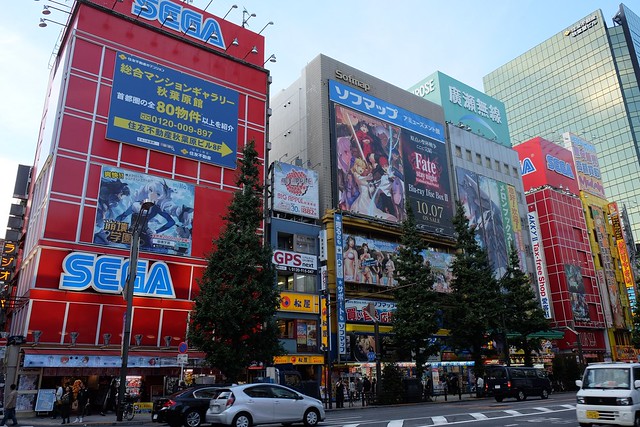 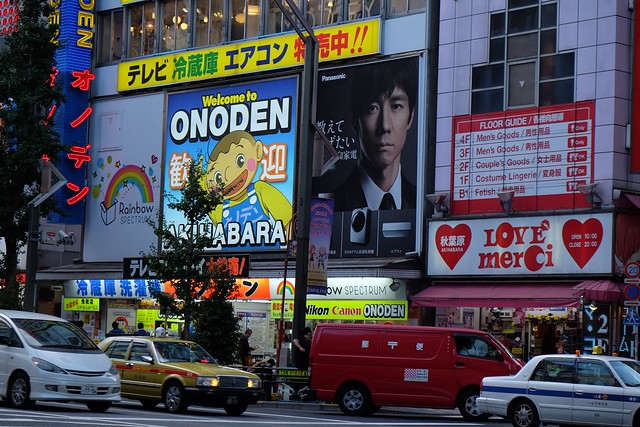 Claire and I went and got a coffee before we headed in to the fray, as we were flagging at this point but still determined. We had the coffee BEFORE we found the maid cafe. 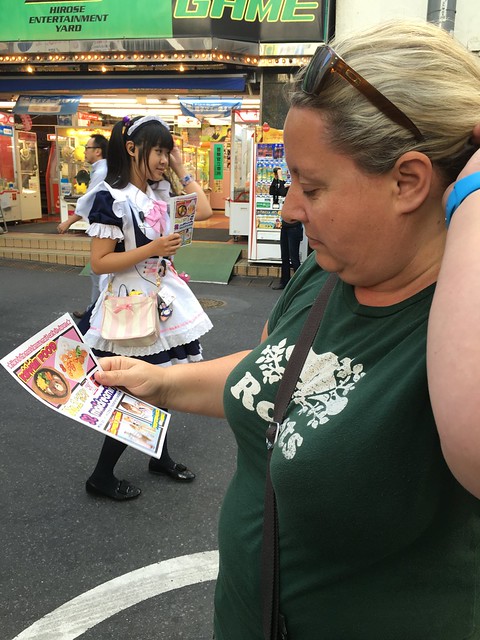 We had fun in the toy stores 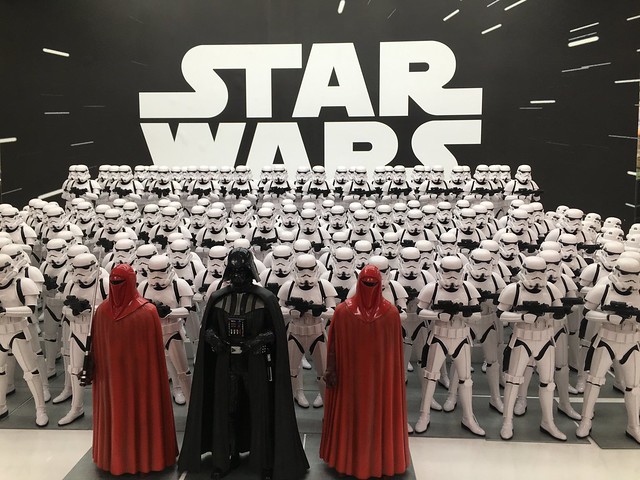 Claire got intimate with a hairy friend 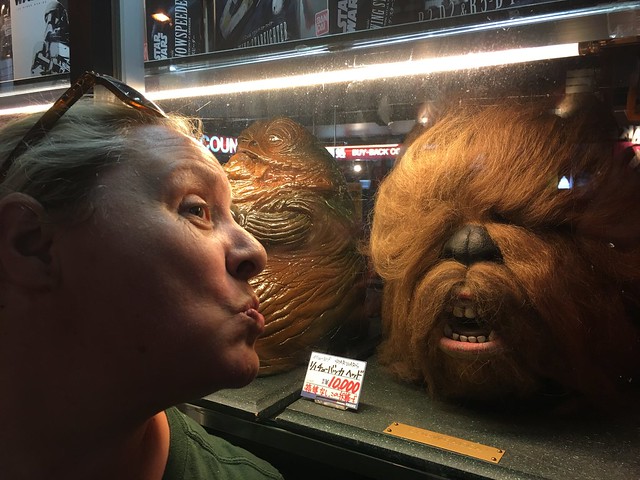 While I reacquainted myself with an old one 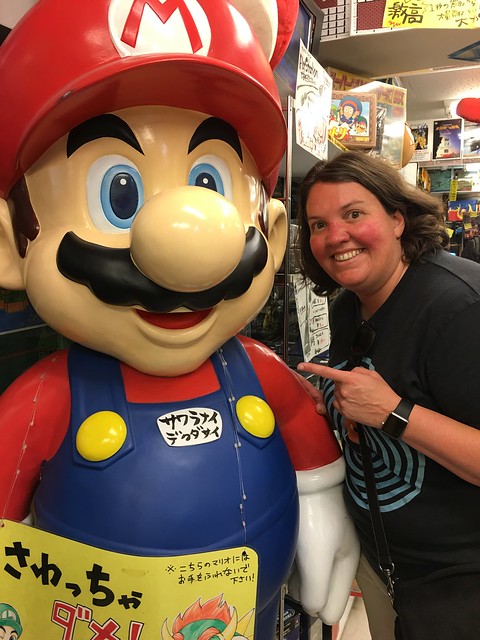 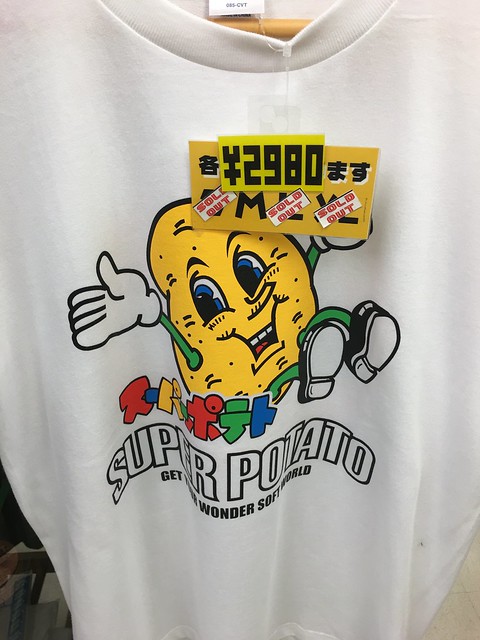 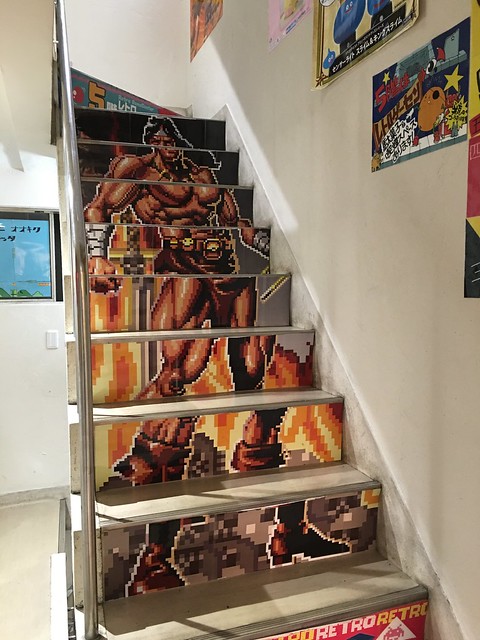 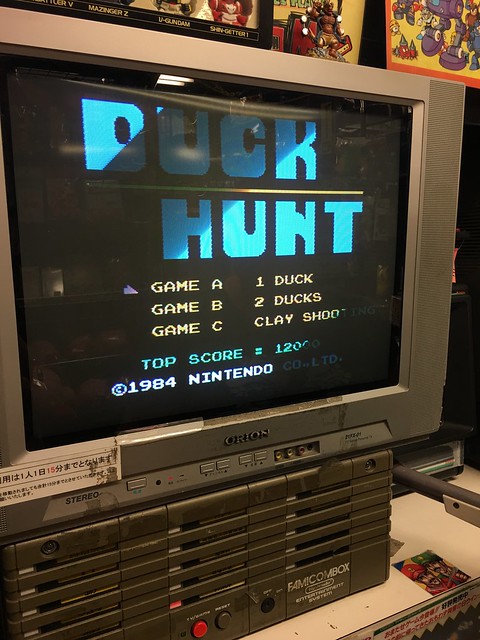 After having our fill of games and geek stores, we headed back to the hotel, where there happened to be a Studio Ghibli film on tv. It was not subtitled (obviously), but I became transfixed by the visuals and calming sound that I watched it until we fell asleep. 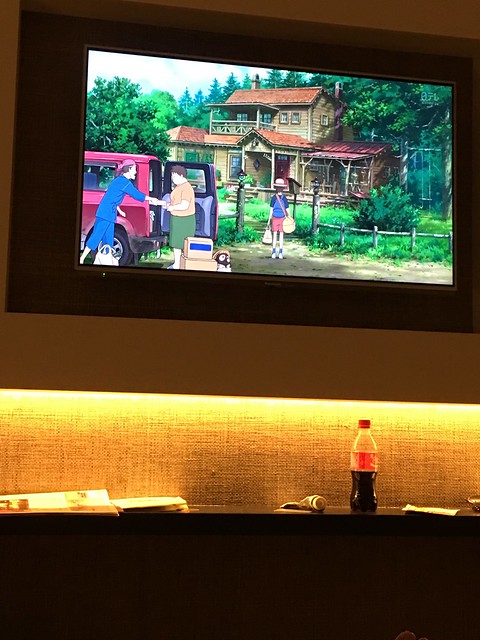