Catching a taxi driven by a slightly odorous driver at 4.45am isn’t my usual start to a Saturday morning but this was no usual Saturday. 8 women from various locales in Queensland were all meeting at the Brisbane domestic airport for a 4 day journey around Melbourne and it’s surrounds. This was the third trip in what is known as the golden girls journeys. The first was a drive to Mt Isa and the second was a trip around Tasmania. The cast of characters on this journey were:

Since we were all arriving at the airport via different methods our arrivals were staggered. The taxi I had ordered for 4.50 turned up at 4.30 so Madonna, Pauline and I left a little earlier than expected. The driver managed to annoy us by trying to hurry us up at 4.40. Mentally I was thinking “sod off, we didn’t ask you to come this early” but I’d only had two hours sleep it came out as “bllurghsiie”. Mum, Kelly and Susan arrived at the airport a little later than we did so we all checked in together. Auntie Sue and Fiona arrived just as they started to make last calls, but Auntie Sue has this incredible timing that allows her to come late and jump the queue. Because we were waiting for her we were the last to get on the plane and didn’t have to wait long to take off.

The entertainment on the flight was the Kath and Kim episode where Kath and Kel spend their holidays at the airport. I had seen that episode so I pulled out the powerbook I had prepared earlier so I could watch the Stepford wives. The story is basically about some robot women who all look and act the way the ideal woman was in the 50s. Seeing the Qantas hostesses in their identical uniforms and short blond haircuts I couldn’t help but notice the correlation. For most of the flight I thought there was only two of them until the four of them appeared together with the food trolley. I still couldn’t tell them apart after that. I’m sure I saw them heading towards a hangar that was titled “Qantas robotic repairs” as we were leaving.

Somehow picking up the Tarago from Europcar took an hour as Mum and I made the fatal mistake of leaving the others behind to get coffee. They went to wait near the Taragos in the Thrifty area, while we waited in the Europcar area for Pauline to show her license so she could drive. Eventually Pauline turned up so we chucked our bags in the back and headed over to the thrifty area to pick up the others. I manage to get to be first driver so I hop in, change the playstation type gear stick in to drive then hit the accelerator. Lots of noise, but we go nowhere. I can’t find the handbrake. The four of us spend 5 minutes trying to find it and finally resort to using the manual. This is becoming SOP (standard operating procedure) on our trips. The car in Tasmania had a missing seat adjuster, this one had the missing handbrake. The solution was found when we realised we were looking in the wrong place – it was a FOOTbrake. 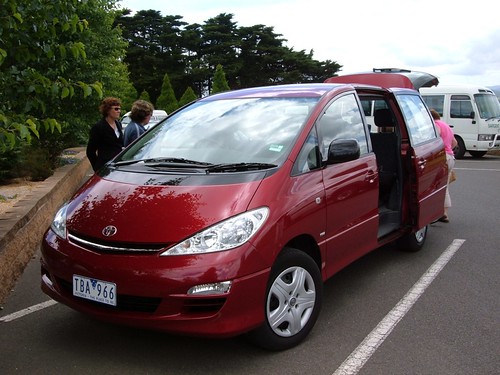 After waiting for two cars to get out of my way so I could drive to the other side of the carpark we make it over to the thrifty girls. 10 minutes is spent organising the luggage in to the extremely small area at the back while Mum is organising the toll fees for our freeway adventures. Contrary to popular belief, 8 women can fit their luggage in the back of the tarago and I have proof. I set up the ipod for some sweet pop tunes to get us out of Melbourne and we are on our way. In the wrong direction. One quick left turn out of the airport and we are heading to Sunbury instead of Melbourne just in time to see a Jetstar plane fly over the top of our van. My mouth drops in awe of the plane and then I do a u-turn so we can get to where we want to go and where we want to go is the Domaine Chandon. 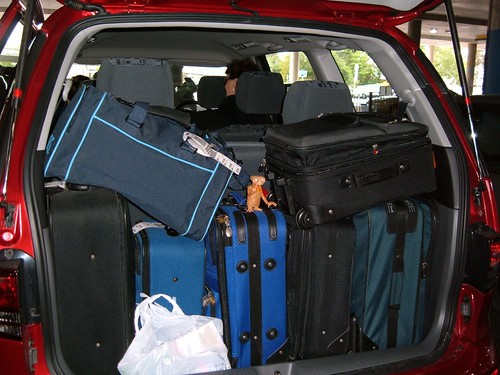 Domaine Chandon is the Australian arm of the Moet and Chandon wine making company and is situated in the Yarra Valley. The wine tasting area was pretty busy with young melbournites and asian tourists but we managed to muscle our way in to get a sip. Nothing inspired the palate enough for a purchase and since we would have to mortgage our house to have a meal we decided to press onwards for food. There is a lovely old house and some pretty gardens and dams to explore but the wine making section wasn’t operating so all we did was look at big silver vats. There was a cool warehouse though for riddling that was in an arch shape to replicate the cellars in France. It was the size of an aircraft hangar and completely empty in the middle but completely climate controlled. The bottles of wine were all lying on the sides of the room and I just felt like running in and doing sommersaults for some absurd reason. 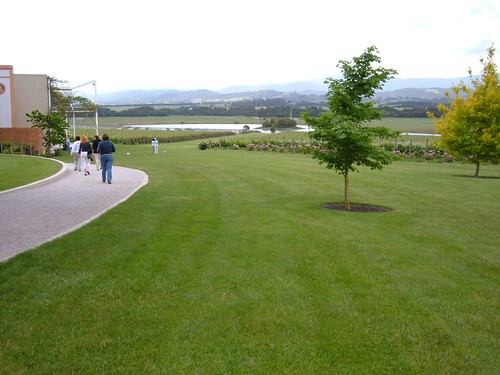 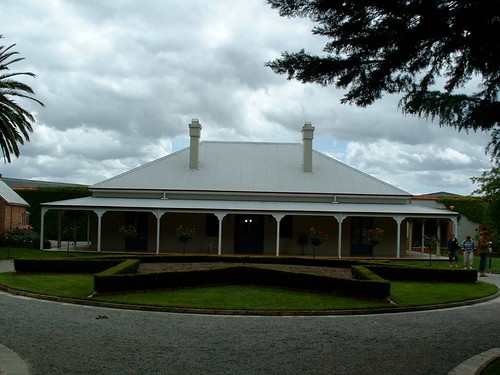 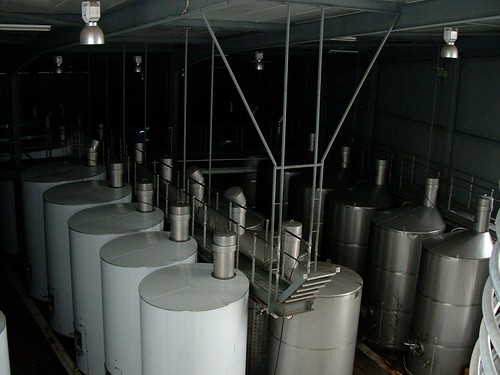 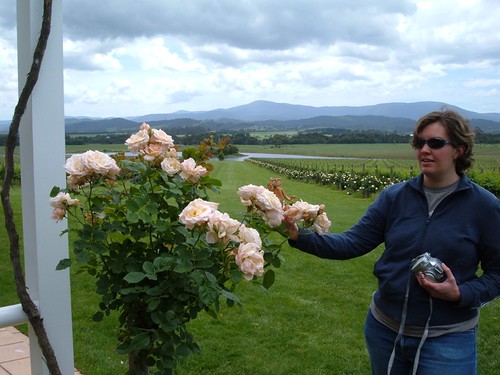 With our bellies rumbling we headed off to the Dandenongs for something to eat. Zigzagging our way across the C roads we somehow ended up in Monbulk where we presumed they make Monbulk jam. The main street was closed because there was a quilt show – we just HAD to stop. Monbulk is a small country town that seemed to make the best sausages, pofferjies and devonshire teas at their fair. We only saw one table with quilts but Madonna bought some nice soap, Mum got some free hats from the Telstra people and Auntie Sue went to town on the German apple pies. My overall impressions of Monbulk was yum. Does food always taste better when you are hungry? 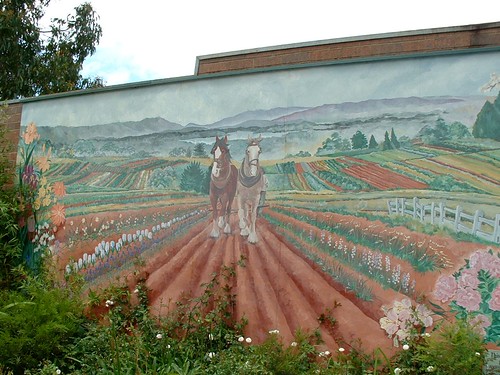 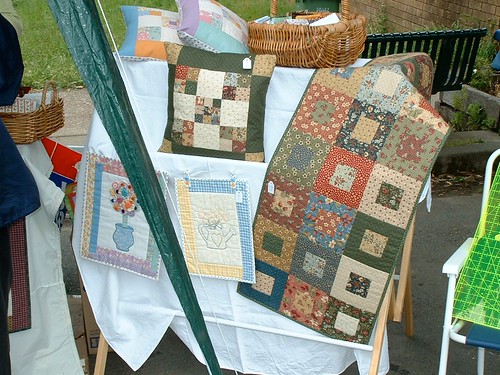 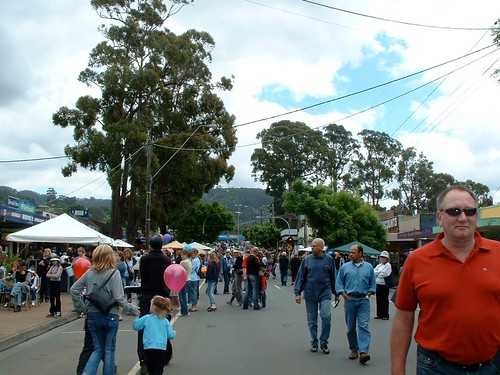 This unexpected food stop caused us to reorganise our directions since we didn’t need to eat in the Dandenongs anymore and we were a little concerned about how long it would take to get to Sorrento on the Mornington Peninsula to make the last ferry at 5pm. So we headed for the highway and they all fell asleep in the back. As we drove past Frankston I morbidly suggested we stop to see the train station made famous from the serial killer Paul Denyer and the show Sensing Murder. Not enough noise was made to stop the juggernaut that was our red tarago so we continued on. After an hour of bland freeway viewing the site of a vivid blue bay was a welcome relief when we emerged at Rosebud. It was hard for me to keep my eyes on the road when the water looked so good. We arrived in Sorrento about 3.45pm which gave us enough time to drive up the main street and check out all the outside diners. Sorrento is a very pretty place with some large stately homes on the hill overlooking the bay. I couldn’t get over how blue the water was. We lined up for the 4pm ferry to Queenscliffe and I drove my first car on to a boat. What an experience. 😀 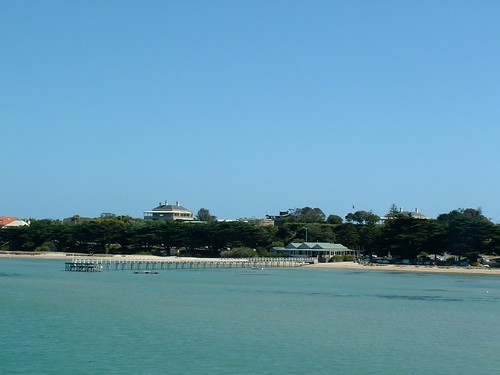 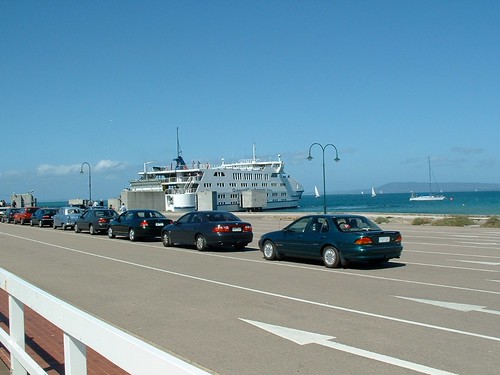 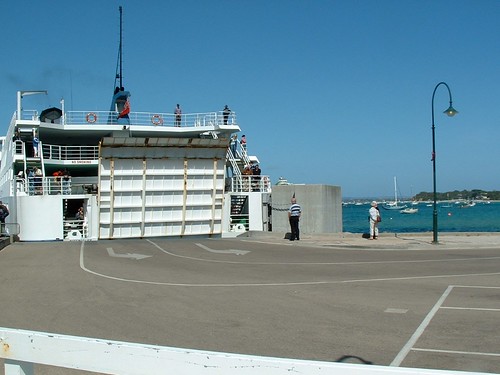 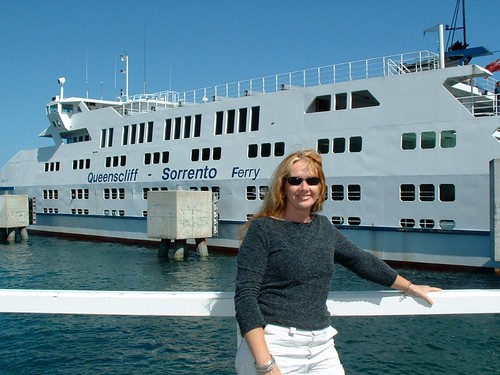 The ferry had two levels for cars and two levels for passengers, the second was an open air area where we could stand and watch the sailboats and backwash from the boat. On board they served the worst coffee I’ve ever tasted and the toilets weren’t very clean. The staff were nice though. The trip took about 40 mins and we got to see the entrance to the Bass Straight – supposedly one of the most dangerous stretches of water in the world. Once off the ferry we headed up to the lighthouse and checked out the view. There were a lot of memorials for the ships that had sunk in the area. 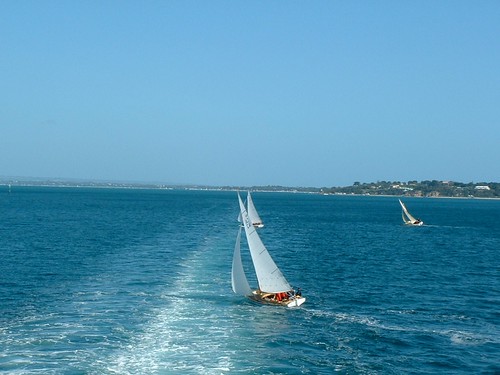 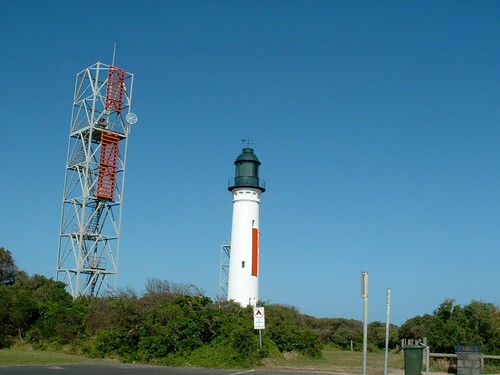 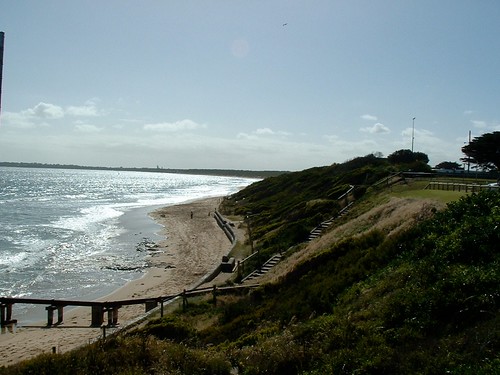 Queenscliffe had some lovely old buildings but we were on a roll and didn’t stop because we were heading for Torquay for the night. I did a quick tour of the caravan park in Barwon Heads for all the “Sea Change” fans, nearly got a ticket for driving 73kms in a 70km zone (they are so militiant in Victoria), a quick blink and we were in Torquay searching for our accommodation. Mum had booked us two cottages in a caravan park as it was the cheapest and best she could find for 8 women. The cottages were clean with a toilet, shower and kitchen. Getting to them through the caravan park was a bit of a struggle as a guy had parked his ute right where we had to turn in to the road. I made a couple of attempts with a lady standing nearby screaming “you’ll make it” while the ladies in the back of the car where screaming “you aren’t going to make it”. So I trusted the people I was going to spend three more days with and drove off in a huff. I’m quite happy to improvise so I took them cross country through an empty caravan space and parked. 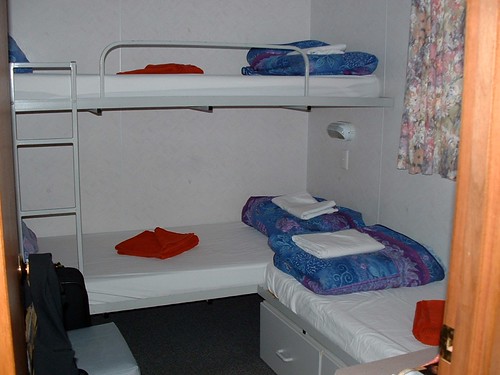 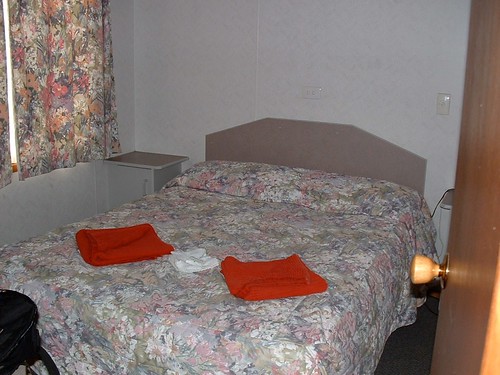 After unpacking and checking out the digs we jumped back in to the van and took a quick drive in to town for fish and chips. We ordered, then headed for Safeway and the bottle shops to supplement our food with wine and nibblies. I was shattered by now due to the two hours sleep I’d had and the day of driving, so when we got back to the cottages I ate and passed out until morning. It was still light outside though so the others took a walk and checked out the sundial across the road from where we were staying. The photos I saw later of the sundial made it look impressive so I’m a little disappointed I missed out. But I guess I needed the sleep so I could truly appreciate the 12 apostles the next day. 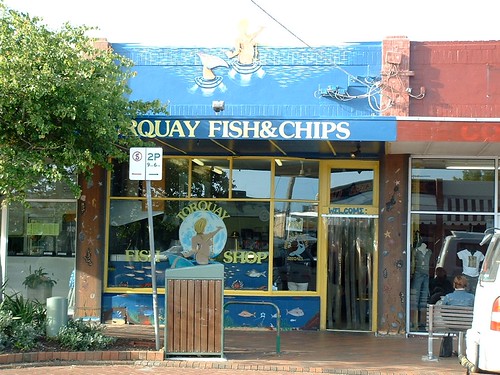 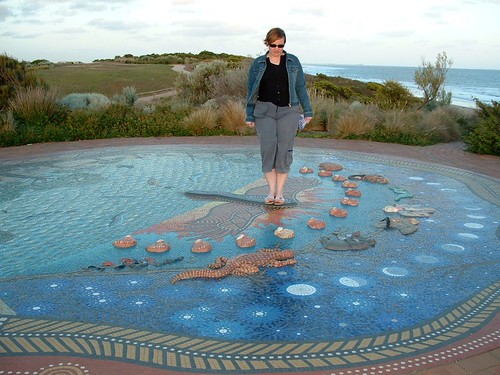 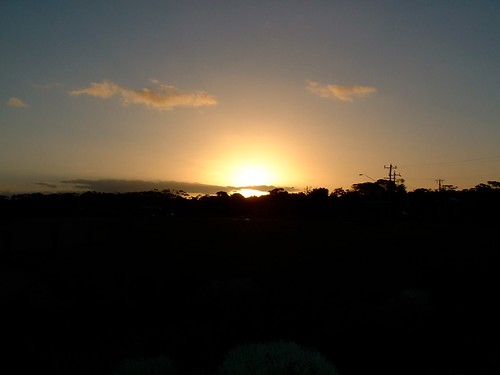