Breakfast sadly finished off the last of our Krispy Kremes dozen. The chocolate iced one was my final and favourite donut. After checking out of our incredibly secure hostel Danielle and I took a final drive down King Street in Newtown. I don’t think I’ll miss the threadbare sheets of our hostel but it was adequate for our needs. 10.00am in Newtown on a Sunday is pretty quiet but the cafes and bookstores were open so we perused some of the secondhand books on offer. Across the road near the Newtown pub is a place called the Froot Shop.

If you were blind and didn’t notice the rainbow colours everywhere outside, the large amount a chuppa chups inside would probably tell you that this store was firmly aimed at gay and lesbian clientele. There were glow sticks, lava lamps and whistles but the best things were the t-shirts. My favourites were the one that said “Fuck off, I have enough friends” and one for little kid of a baby dressed up like a punk. We spent about 15 minutes in there browsing and talking to the friendly gay guy owner and then walked out not buying anything. He was probably pissed about that but being so friendly he kept it hidden.

Since we had arrived in Sydney a bit too early for the Mardi Gras Parade we thought we’d substitute it with the fair day held in Victoria park just down the road from Newtown. Rocking up around 10.45am I was surprised to see a large amount of people there for a rainy day. There was a big stage with a huge screen displaying a singing lady with a beehive hairdo. At least, I think it was a lady cause no man would have a voice like that. She sung a lot of hits from the 50s and 60s. 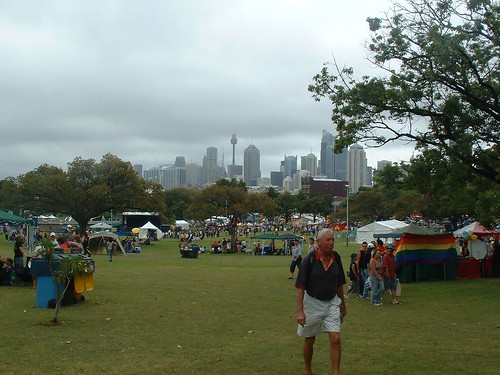 The stalls were numerous and ranged in topics from gay travel to gay catholics. The famous Sydney dykes on bikes had a stall selling merchandise and you could sign up to join them in the parade. Boost Juice were making their expensive drinks to sell to the punters with the large disposable incomes while Pal were giving away doggie treats to the dogs entered in the pet parade. Gay people love their dogs and cats don’t ya know. In fact the pet parade looked like the most formidable force at the fair. The stalls for the animals almost outnumbered the rest of the shops and there were dogs with more bling and feathers MAGs (Mature Aged Gays). 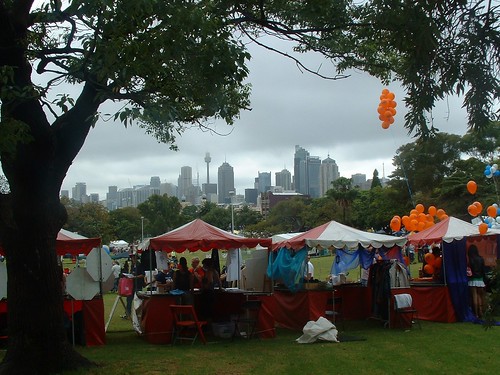 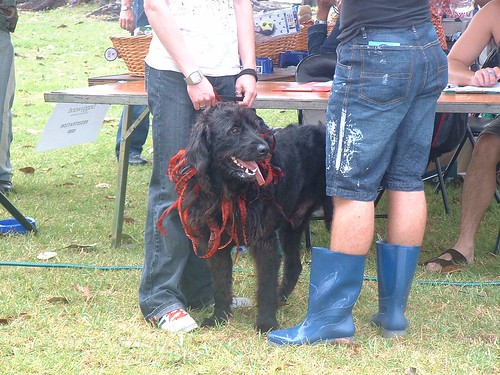 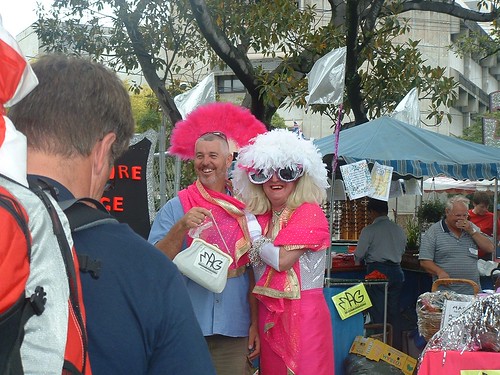 After completing a few surveys, dodging the mardi gras frisbies being tossed (insert rude joke here) and pausing to listen to the gay orchestra we left around 12.30pm. Our final tourist thing we did in Sydney was to drive over the Harbour Bridge which was suprisingly simple for us to get on. It’s such a pretty bridge, thanks Paul for painting it all those years ago. Our final goodbyes were said as we passed the rock formations that had greeted us 3 days earlier then it was 110kms an hour all the way to Newcastle. 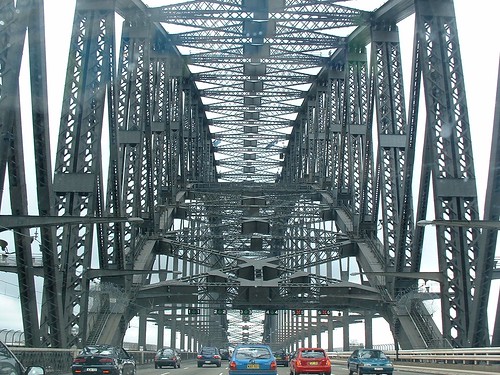 Just past Newcastle you reach a junction where you make the decision to go on the Pacific Highway or the New England Highway. Both are fun in the sun but the difference is whether you want white sand or red dirt blown in your face. Our choice was easy as we had done the Pacific on the way down and wanted to see the bush. One left turn later and we were heading for the capital of Australian country music – Tamworth. 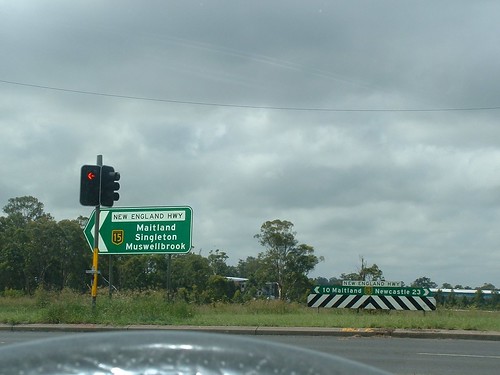 There’s not much to see out here, a few scattered farms, some cows and sheep and four frigging huge power turbines at Bayswater, Muswellbrook. Driving is also a bit slower as there are many one horse towns that force you to slow down to 50kms an hour as you pass the horse. Thankfully the NSW government kindly informs you when a speed camera is coming up so that you can speed all the way until you hit the camera zone. But it is entirely possible that I have left a string of speeding fines behind me that add up to one lost license. Not that I tend to speed.. 😉 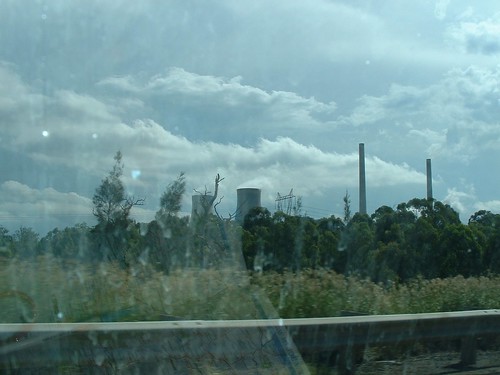 Scone is supposedly the horse capital of Australia but Danielle only counted 13 as we drove through. It seemed like the town after it was trying to take the mantel as it had some enormous studs there where the next phar lap is probably being bred as I write this. I have no idea if Scone is also the capital of a damper type substance served with jam and cream but I saw no big scone to alert me to the fact. As we all know, you can’t claim anything in Australia if you don’t have a big one.

Nearing Tamworth we noticed storm clouds forming and had the odd experience of seeing a large formation of rain in a valley that we caught up to. It gave the car a bit of a wash because everyone needs to gussy up when visiting a town with such history. Tamworth is Australia’s Nashville and as such it is filled with gaudy things such as the big guitar and the country music hall of fame. The first hotel you see as you enter has a guitar shaped swimming pool that is looking sadly neglected. There is a viewing platform covered in shrubs and spiders while the tuning end which I assume was the spa was brown muddy water. Only the pink galah felt like taking a dip so after enquiring on the price we left. The accommodation looked acceptable though. 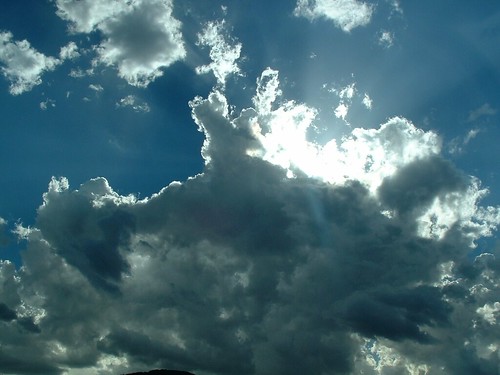 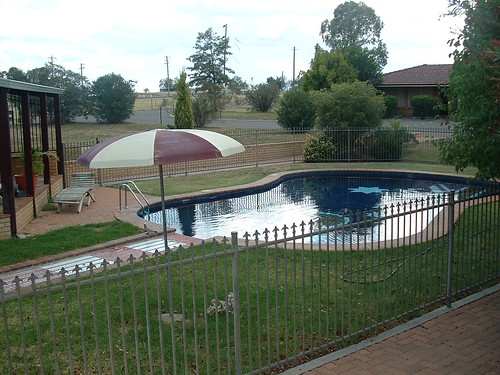 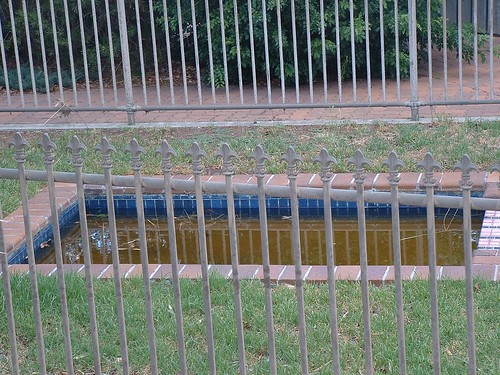 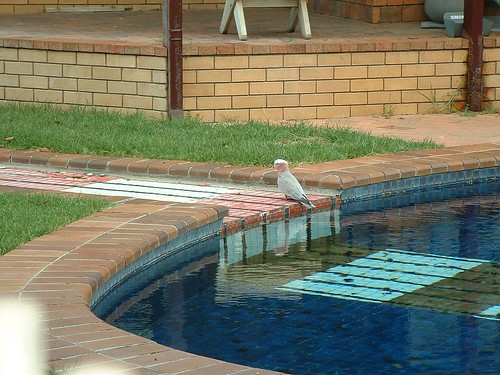 We took a long drive down the highway in to town checking out all the accommodations on offer. The place gets pretty full around the Country Music Festival time so there is ample choice. Even though there were cheaper and gaudier places, we just couldn’t pass up the opportunity to stay at “The Golden Guitar Motor Inn” thus named due to the huge golden guitar out the front. The Inn is across the road from a McDonalds and a petrol station, right next to a country pub and attached to the Country Music Hall of Fame. What was the best about it though was the incredible shower – the greatest and powerfullest shower of all time. These people really know how to build an overnight hotel. 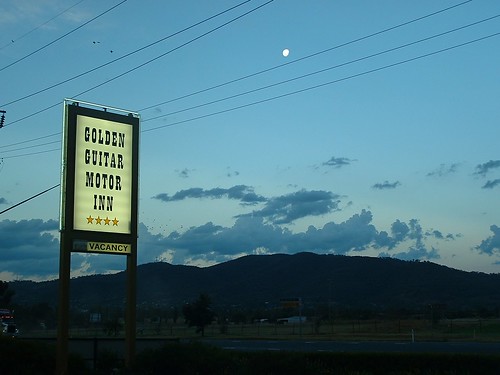 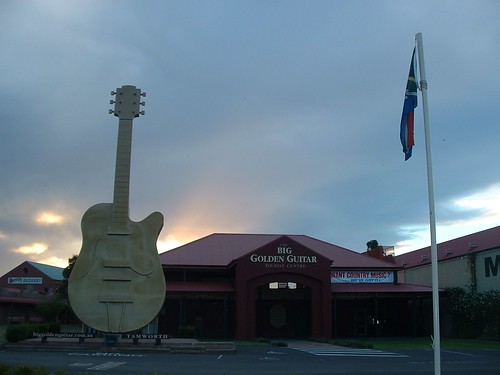 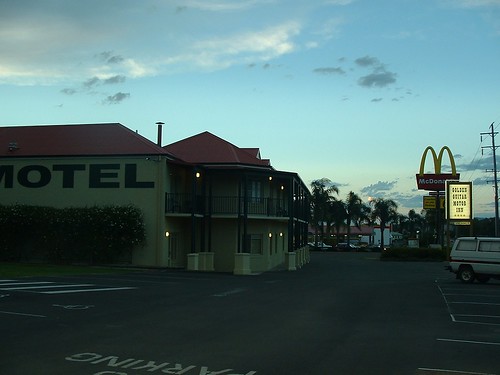 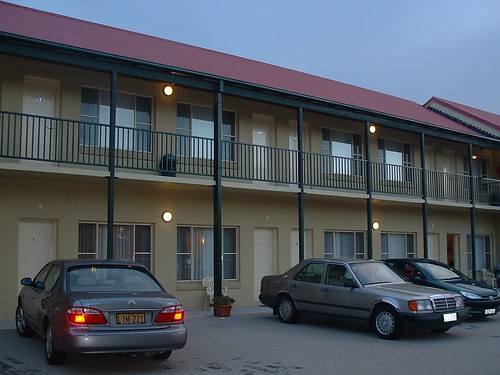 As we checked in I hit my flu peak with a fever so we rested for awhile watching Muriel’s Wedding on the Austar movie channel. Next door the people out the front of the pub were playing some country music but we were more interested in the food out the back. Danielle got some thai style chicken while I had an incredible chicken curry damper with chips. The beer garden is a huge space that I’m sure is full on Fridays and Saturdays but I guess on Sunday nights it’s a little slow. In the distance there was a brilliant electrical storm going on that kept us mesmorized for a while. I would have driven up the lookout to get a better view but by then my flu had wiped me out. When I fell asleep to “The New Detectives” I knew I was nearing home and all my old habits.