The carpark in the hotel was empty by the time Danielle and I started packing up the Mercedes. The peugeot beside us had left pretty early but we were in no hurry to leave as we wanted to explore a little of the town. As I drove the car in to the shade the owner popped up to have a chat about the car. He currently has a new Merc but had previously owned a similarly aged vehicle as the one I was driving. I asked him about servicing costs and he replied that the BMW he also owned at the time cost more to look after than his merc, thus prompting him to stick with the same company. Mum will be pleased with that.

Danielle and I took a walk next door to the cafe and shop where the Hall of Fame was. We were both looking for presents but I was finding it hard to dodge the lifesize standups of Lee Kernaghan and Tim McGraw. Danielle was preoccupied with the kitsch fruit coasters and tooth pick holders so I spent a fair bit of time looking at the rock collection in the cafe. I was most impressed with a large cylinder shaped white rock which had been formed on a barbed wire fence. Salt had kept on building up on the barbed wire to form this huge cd width envelope of salt with the barbed wire in the middle. 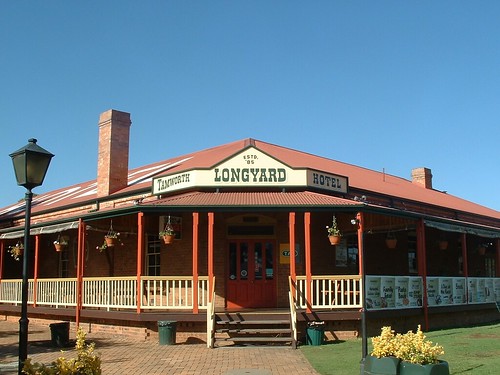 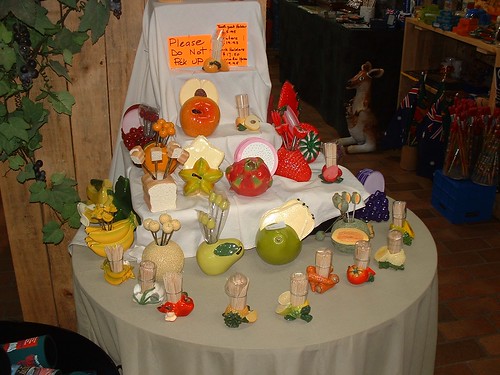 Our presents purchased we took a few photos out the front with the guitar then headed over to Maccas for breakfast. A road trip isn’t a road trip without stopping at a fast food joint so this was our nod to all road trips before and after us. While Danielle was in the loo I eavesdropped on an old american couple who were arguing over the phone card system. I think she wanted to make a call and he thought it was too expensive. I wondered what had brought them to this town in the aussie bush and how long they had been in Ozzztralia. Their southern accents gave me the idea that they were mega Keith Urban fans and just wanted to find out his roots.

We took the slow way out of town so that I could stop at a pharmacy to get cold and flu tablets to keep me going through the day. Tamworth has a tonne of pedestrian crossings which was incredibly annoying when you are trying to look at the town and not at the road. 🙂 Luckily I left no one maimed or dead behind me (as far as I know) and we drove off into the slow and hilly roads towards Armidale. 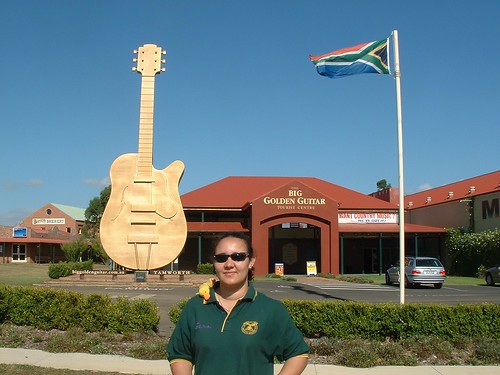 Our first stop on the lonely road from Tamworth was the lovely but boring Armidale. It was Danielle’s first visit to the town so I showed her it’s best asset, the park in the middle of town. It’s huge trees, band rotunda and surrounding churches give it almost an english feel and the shade is a lovely shelter from the warmth of the aussie sun. I always think the place is going to be more impressive as it is a university town but I’m always disappointed. Any Armidalians reading this blog should point out to me the places that I should go to the next time I’m down there. We stopped for a pee and a coke then hit the road again. 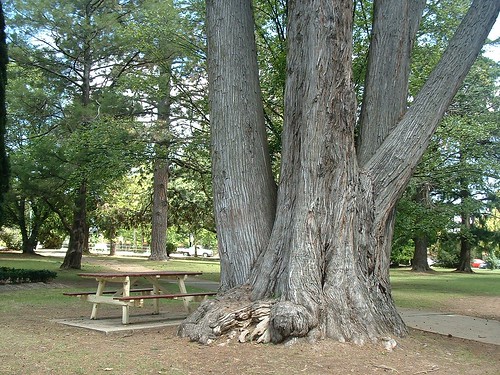 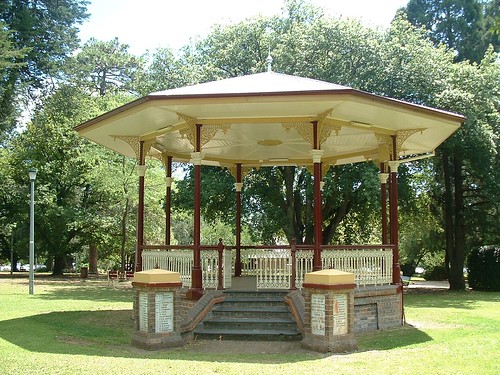 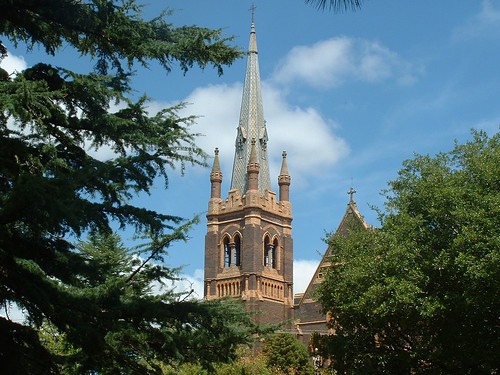 The late George Woolnough worked on High Street and lived on Manners. 52 years he sat on his veranda and made his saddles. Many years later both he and his grandson were dead but for entirely different reasons. George was a drunk and ended up shooting himself while his grandson died from the dreaded aids. The grandson ended up writing a song about his grandad but he is better known for calling Australia home. Tenterfield is the home of Peter Allen but the only thing that tips you off to it is the Peter Allen Motor Inn and the home of the saddler which still exists. 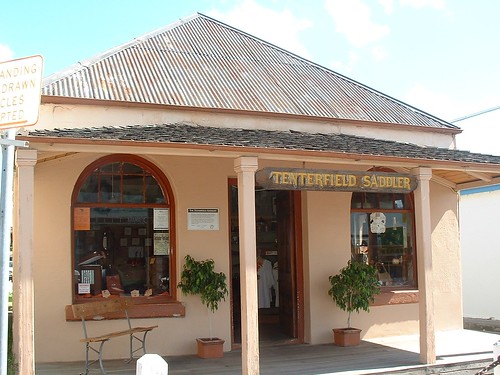 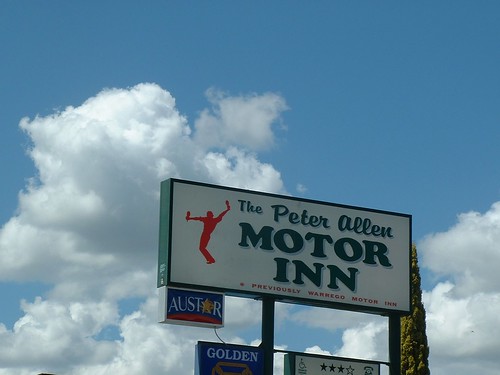 It was here that we stopped for lunch at an old style cafe. Danielle had wanted to go to the 50s style diner that had a jukebox, james dean and checkerboard floors but it looked like it was being liquidated. The cafe we ended up in had this lady who was a midget who I immediately pissed off. I think it was cause I didn’t realise it was table service so I was sort of standing up lording it over her as I ordered. Once we sat down at her level and ordered we kind of won her over – especially after praising the water bottles and coffee cups. The food there was fresh and yummy although it did take a long time to come out. 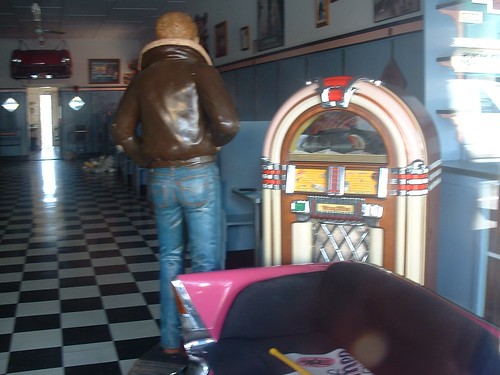 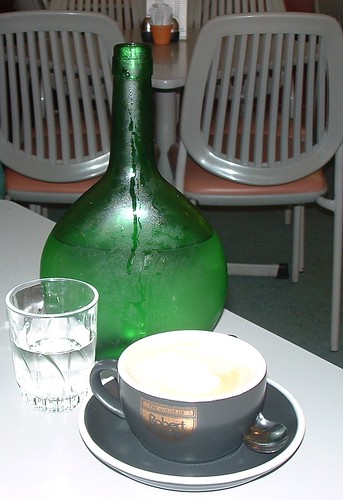 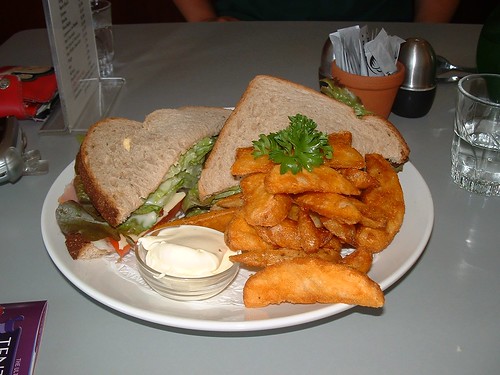 Just as a twilight zone aside, as we drove in to Tenterfield it was playing “Sandra D” on the ipod, then we saw the “Hair by Sandra D” sign which I took a picture of. A few days later Danielle discovered that the real Sandra D had died on that day. Spooky 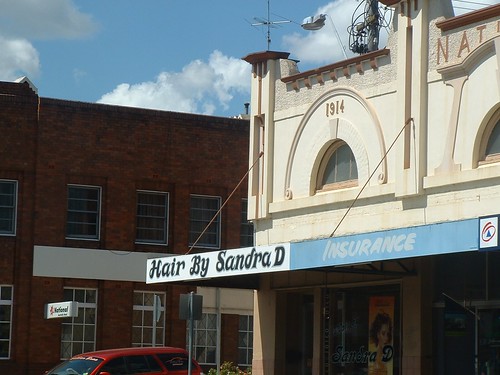 The rest of the journey was just a long slog to get home. We didn’t stop anywhere else so we basically amused each other with the ipod. Murphy’s Law states that you won’t get the music sorted until the last day. This is when we came to the incredible conclusion that everything on my ipod was something I liked, so if Danielle picked the songs it would be the ultimate compromise. She was the DJ for the rest of the trip with a noticeable predilection for 80s style music. We listened to Michael Jackson when stopped in the middle of nowhere for roadworks, Huey Lewis going up and down hills and the Scissor Sisters near Warwick.

Sadness hit in around Ipswich as it is the point of familiarity and knowing that the journey was almost over. Being on the road has a romanticism since before the time of Kerouac. No need to worry about electricity bills or washing up because you can leave it all behind you and move on. Every day is an adventure and no day is the same. You are in the great outdoors and seeing parts of the country that you’d only read about. But at the same time, damn it’s good to be home. My only regret on this trip was that we didn’t take the chocolates out of the esky before the ice turned to water. Geez that stunk. 🙂