I was fortunate enough on Tuesday night to snaffle an invitation to the Nike Air Force One Party at General Pants in the Queen St Mall. It wasn’t hard to get, I just sent off an email to Nike. I wasn’t quite sure of the starting time so I rocked up around 6.45, surprised to see a lot of other people waiting. I could tell they were waiting due to the fact that they were wearing some of the hottest sneakers around – ones that I’d only really seen online. 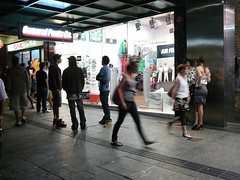 Waiting outside the store made me feel like I was lining up to go to a nightclub, all beautiful people in their Bape jackets, I love NY shirts with bandanas, tight jeans, high top 80s reeboks and NKOTB t-shirts. I felt so uncool and 32 – especially because I owned the NKOTB shirt the first time around. It made me wonder what I would get for an original Bros t-shirt. 🙂 My favourite item of clothing was the Mork from Ork pair of Nikes which looked loved. It was a whose who of the Brisbane Sneaker scene – the boys from Apartment were there along with Clinton from Laced.

After waiting 45 minutes and watching the General Pants Staff greet their friends and let them in first like a bouncer at the door, we all lined up to go in. Any of us who were wearing Air Force Ones had to stand at the door and hold one shoe up to our face and get a polaroid taken. They would be used later to win prizes.

Once inside the dj was spinning the tunes, beer and pizza were handed out and all the shoes were on display. Woody from Sneaker Freaker had brought up some of his own collection including a rare canvas pair along with the amazing hairy shoes. Even though they were in plastic boxes, the real shoes worthy of keeping us away with our dirty hands were the Masterpiece Crocodile and Anaconda pairs. These shoes were crafted in Italy and with only 8 pairs in Australia they are worth over $3000. If you bought a pair of AF1s that night you were in the running to win a pair.

But the real reason we were there was to buy the pairs Nike had just released. They have an “Original Six” series based on the basketball players who I think were the first to have the AF1s as their signature shoe. I was lining up to order a pair when I got chatting to Clinton from Laced who said he had some in stock, so I said I’d get them from him instead (unfortunately they didn’t have my size, so I’m going to have to look elsewhere for the purple and gold favourites).

After some announcements we all watched a video about the history of Air Force shoes – they were discontinued everywhere in the world in 1983 except for Baltimore where three shoe stores convinced Nike to make them just for them. They were so sought after that people from New York and Philadelphia drove down each month to buy the latest release. Eventually Nike realised their appeal and decided to start selling them everywhere again.

It was amazing to me to get an glimpse in to the inner sanctum of sneaker freakers and how it is very much a nightclub mentality. I only saw about three other girls wearing kicks, the rest were all identical Paris Hilton look alikes with pointy shoes clinging to their boyfriends. I had to laugh when I saw one of the buttons on one of the three girls high tops. Mr T saying “Pity the fool”. Most people pity the fool who would pay $250 for a pair of sneakers but I totally get it. Totally get it.