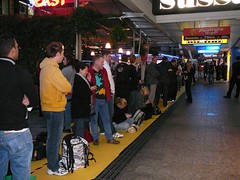 So of course you’d know I’d end up buying an iphone on launch day since I’m such an apple fangirl. I could have taken the easy way out and visited a store more local to me, but I wanted to do the lineup and fanfare of the one in the city. So I get up at 5.30am, have a shower and rock up to the line at 6.15am with my macca’s coffee and mcamerica bagel. The line is already about 50 people but they hadn’t reached the end of the yellow carpet they had kindly put down for us. I was given a ticket, told that when they opened at 7am they would put through groups of 8 at a time and that 8 would take about 20 mins. By her calculations it would be about 8am by the time I got to the front of the line. I knew that was unrealistic, but I could dream.

While they handed out coffee and muffins to people who were smart enough not to bring them, I killed time listening to my ipod and texting whoever was awake. Chris, Jo and Trent came to visit me around maybe 7 and laughed at my position in the line. I showed them my not so cool iphone 3g yellow headband I’d been given and then bid adieu to them. The line hadn’t moved by the time they left, but it did go just after.

More chilling out, people watching, waiting 30 minutes and then moving up about three people and around an hour later Chris, Jo and Trent walk up holding familiar boxes. The bastards had gone to buy a bagel in the Myer centre and walked out with iphones from strathfield since no one had lined up there. Chris being the guy who only the day before had said he wasn’t going to get one and was going to wait for android. I wasn’t impressed and nor were the people around – I think they would have turned lynch mob if they had hung around any longer. Meanwhile tv cameras and entertainers wandered up and down trying to keep us occupied and made us cheer for the guy who was first in line (since 8pm thursday). You too can be a celebrity just by being a consumer! You can’t imagine the amount of strange and dirty looks we got from passerbys. Some guy walked past going “it’s just a phone”. Of course it’s just a phone.

So, fast forward through the Krispy Kremes, water and amazing cupcakes to … wait for it…. 10.30am and I’m finally in the store with the girl. She asked me my account number for my other company and of course I don’t have it since they didn’t tell me to bring it (isn’t a phone number enough?) so to make sure I don’t miss out I just get a new number. I also tried to get Pauline a phone since she decided at the last minute she actually really wanted one right now and didn’t want to miss out (she always wanted one, but work might have gotten it for her) but I failed in that since they said I could only walk out with what I ordered.

With my white 16GB iphone in my hot little hand (they had run out of black ones about 15 people ahead of me) I walked down to Big W to purchase a $50 iphone card for $30. Unfortunately for some reason (what could it be?) big w were having some sort of trouble activating the cards through apple so she said not to bother and come back another day (the deal is on for a while) . On the way home I stopped at another store to see if they had any left for Pauline but they were out of stock too.

At home, I synced it all up with itunes and waited for the service to come online. That didn’t happen until around 3-3.30pm so I just played with all the apps I’d installed using the wifi stuff. The twitter stuff was cool, not so fond of the mobile google reader and I’m a little let down by the gps integration with the mail client but it’s still 10 times easier to use than my old mobile phone. It’s a much better extension of my online life since I can do all the things I do online, gmail, gcal, twitter, rss. I love the sms threading and the fade in and out of the music – you can’t underestimate the importance of that. You don’t know how often I miss a phone call cause I’m listening to music. I know it’s just a phone, but it’s a great phone.  Next task, lets see if I can blog from the phone!