I’ve been asked quite often about how many shoes I have and by shoes people usually mean sneakers because that’s all I basically wear. To look at me you wouldn’t think I was a fashion victim but when it comes to sneakers I have a bit of a fetish. So, to answer those questions with visual aids, I will now attempt to document all my shoes and where applicable I will also add the matching t-shirt since someone finally noticed that I usually do go to the trouble of colour co-ordinating them. I will start with the newest addition… 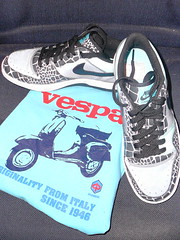 Favourite feature: Has to be the reflections although I’m partial to the Tiffany Blue highlights. The shoe looks quite unfancy until you see it reflect

Most wearable location: Nightclubs and escalators show off the reflections the best. Plus they are a little dressy

Other people say: “A crocodile died for that shoe” (Little do they realise it’s plastic!)

What attracted me to the shoe: I already had a pair of court forces that were so comfortable I was wearing them daily and ignoring all the other shoes. I had wanted a pair of reflector hi-tops earlier in the year but when I went to the stores in town no one had my size. I’d given up on the idea when I found these samples in the Nike Store at Harbour Town so it was obvious they were waiting there for me to get them. Saved me over $80 too!

Why does the shirt match: Obviously because of the colour but secondly because when I wear both on the scooter I can almost guarantee I’m not going to get hit by a car!

All this sounds great but what are they like to wear: Comfortable straight away apart form some rubbing around my right ankle. It should disappear after a few wearings.