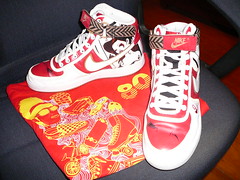 Favourite feature: The arrow at the front is cool but I adore the King and Queen card stitchings on the side.

Other people say: “Are those shoes shining?”

What attracted me to the shoe: I’d seen them on blogs and I loved that they were such a piece of art. They are quickstrikes which means they are released in minimal quantities which of course makes them even more desirable. But mainly it was because I didn’t have any high tops and wanted a pair. I also wanted it to be something other than an Air Force One since I’d bought so many. Probably the most expensive pair I own, however they are also probably the most collectable. The red is also reflective like the tiffanies.

Why does the shirt match: Apart from the colour, they both have intricate drawings that are a little cartoonish

All this sounds great but what are they like to wear: Too big. They’d run out of the size I wanted so I had to go up. I thought I’d fit in to them since I have size 9s of other Nikes but it turns out the Vandals are bigger. I save them for special occasions where there isn’t much walking. 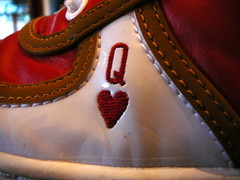