The Flight
When you think about seats on a plane, you usually think the worst ones are the ones right in the centre of the centre block of seats. Those are the ones Pauline and I got. Because the flight was full, all seats were pre-allocated and we didn’t get a say. On the first leg to Auckland Pauline sat next to a nice New Zealand girl coming back from PNG after visiting her boyfriend who was working over there. I got to sit next the all american quarterback looking dude from Iowa. He had just spent a semester studying at Bond University and wouldn’t shut up until the entertainment started when he could watch American Pie III. Luckily I wasn’t very good conversation for him and he made friends with the young american girl across the aisle. He spent the Auckland trip adjusting himself every 5 seconds, getting drunk and falling asleep. 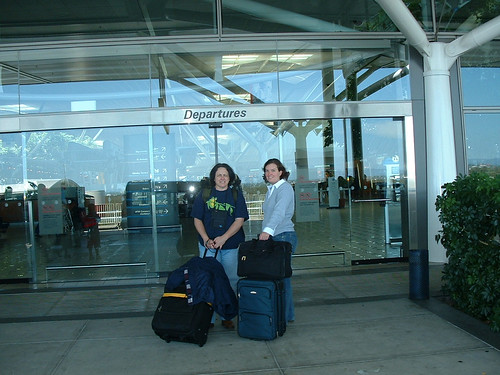 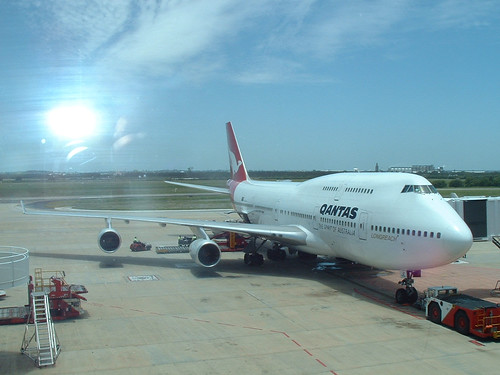 In Auckland we spent about an hour walking around the airport reliving the trip we took there earlier in the year. The airport was very nice. We then spent a lot of time trying to figure out what the announcer was saying and decrypting his messages with a lovely lady from Christchurch who was on her way to meet her husband in American to spend 5 months travelling around with him as he is a truck driver.

Back on the plane after the stopover, Pauline had a very quiet american who sniffed and I still had the mad masturbator. I was worried at this stage because I felt if all americans were like the guy beside me than I was going to have a lot of trouble. This leg of the trip was a drag. On the whole flight, I managed to watch Seabiscuit, Mambo Italiano, Swimming Pool, Freaky Friday and bits of Finding Nemo and SWAT. They also showed Kath and Kim and AB Fab. I tried sleeping for about 2 hours but it wasn’t going to happen. Ditto for Pauline. At least the food and the service was good, but I still haven’t changed my mind about Qantas being a cattle cart for economy class.

We arrived in LA International Airport at 10.00am US time, and finally got through customs about 12pm. The plane landed at a remote terminus so we were actually bussed to a building to be processed. It was wierd seeing all the drivers sitting on the other side of their cars. The line up to customs was pretty well organised and the ladies directing us had a good sense of humour. We got the usual questions from the customs officer at the gate, and I was careful not to make any jokes about bombs or terrorism. I was surprised that I wasn’t strip searched after all Malcolm’s and Keith’s jokes about making up stuff about me. 🙂

After our relief at actually being allowed in to the country, we rechecked our baggage to the next flight as it wasn’t allowed straight through to San Francisco, due to the fact that LAX requires all luggage to be collected. We were then free to explore the world of Los Angeles and see how we could fill our time until the next flight to SFO. So….. we have a look around the terminal to see how we can occupy ourselves or see what we could do and we didn’t find one brochure, coffee shop or newsagent. All we saw were lines and lines of people for American Airlines. We decided to walk outside to smell the air and see what was going on. Saw some very nice cars outside the First class area, 2 limos and lots of men who check you into get their boarding pass before turning up. The guys basically just tag your luggage. If only we had had that for our line up at Qantas.

After the little walk outside we noticed the line-up to get through to the gates, so we decided to line up early due to the fact that we suspected that there were coffee shops and food just after the security guys. This line took one hour, but I managed to pick the brains of a girl in front of me from Pasadena on her way to Miami. She gave me a few good tips. Had a bit of joke with the guy running the xray machine then Pauline and I were free to roam the terminal. So we had a look at the Starbucks, the burger king, the newsagent, the mexican food place and the expedia travel right cafe. We then collapsed exhausted and people watched. I enjoyed picking out all the characters from movies and the Jerry Springer show. 2 hours later we were on the plane to San Francisco. My impressions of LAX weren’t great, but I guess you don’t expect much from an airport. 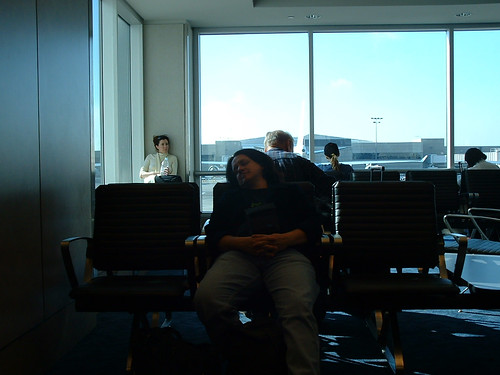 On the Flight to SFO using American Airlines we stayed low and got to check out the coast route we will be driving along. Saw Santa Barbara from the air, along with Monterey and Carmel. The flight took an hour and nearing San Francisco the clouds took over, so that when we decended in to the city we went from sunny to almost dark. SFO was a different experience entirely to LAX, we virtually just walked off the plane and out. Caught the curtesy shuttle to our hotel, ordered some pizza from room service (extravagent! due to the fact that we are still in an industrial area) had a bath then passsed out. We’d been awake over 31 hours, so we slept pretty well. 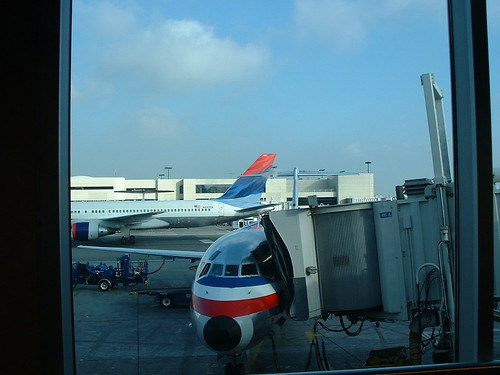 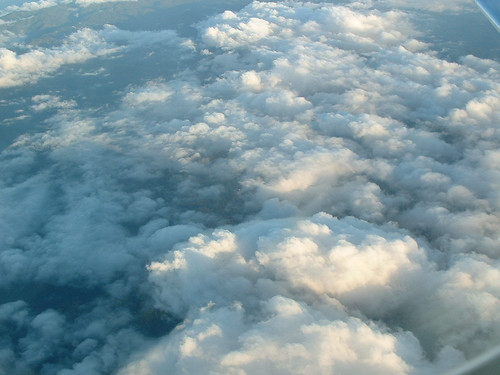 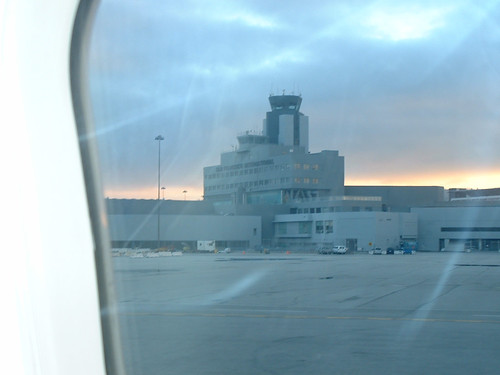 I’m writing this about 7.00am on the 22nd December in the Holiday Inn hotel. Looking out the window I can see freeways, houses and letters on the side of a mountain that says “South San Francisco The ****** City”. The asterisks portray the unknown letters that are blocked by power poles. So I don’t know what kind of city I am in!! 🙂 Pauline is impressed that the hotel room has a drip filter and she enjoyed the coffee this morning, 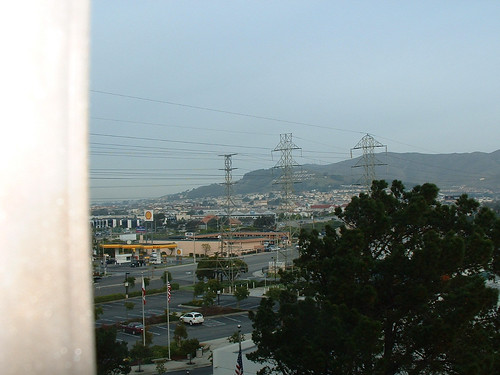 We are about to pick up the car and head off to who knows where. The mundane part of the journey is over and the adventure truly begins!!!!