Up early to pack my bag (at the last minute) which was difficult because of all the stuff I’d accumulated. At least this time we weren’t going to be lugging it around – we were due to pick up a minivan and drive to Cape Cod today. Checked out of the hotel room, left mum minding our luggage in the lobby while Pauline and I walked down the street to the Alamo Rental location. I’d estimated a 30 minute walk with a straight drive back down 31st street. Turned up to the rental garage and overheard her searching for a mini van for the guy who was already waiting there. Hoped ours was waiting because we’d ordered one two weeks before, but no, it wasn’t. She sent us to the Alamo on 50th street, knocked some money off the final bill and gave us a rental car to get there. Showed us how to use the gps, did all our paperwork and off we went to the other store. A little inconvenient but we could cope.

After driving straight there, admittedly a little cautiously because we are in New York and didn’t want to smash the car we arrive at the parking garage and encounter really rude service from the parking attendant. All we wanted to do was give him the keys and get the minivan, but all I get given is an extremely bad mood. I was ropeable. Go upstairs to pick up van only to be told that we had taken too long and they didn’t have it anymore. We were all like “What the fuck, we came straight here?”. Pauline and I got really shitty because we thought that since she did all the paperwork at the other store that we had the car. Turns out no, she had given the car to someone else because we had taken over an hour to get 20 streets. Might have something to do with filling out paperwork, getting a gps, waiting for a car, doing a once over on the car, driving there and getting attitude from the bastard attendant.She told us we had to go to the Alamo on 12th st to pick up a different minivan. We shirtily said it better be there because we were going to get the shits really bad if it wasn’t. She assured us it would be and took more money off the bill and this time made us take a taxi.

Taxi was way quicker of course and we understood why she questioned why it took so long. But geez, we didn’t need the attitude. The lady was waiting for us on 12th and within minutes we were driving out of the garage in a Toyota Sienna – like we should have been two hours before. I don’t care if we got $100 off the final bill – Alamo sucks. Meanwhile, Mum, Auntie Sue and Fiona had been waiting out on the sidewalk for hours since they thought we weren’t going to be long. When we rocked up I thought they were going to die from heat exhaustion or something, but they claim they had lots to look at while they were waiting. I’d tried to text them on Fiona’s phone but I guess it hadn’t gone through. We finally left New York around 11.30am.

The gps took us on a route down the FDR Parkway and on to Long Island. We got to see the old Pepsi Cola sign in Long Island City and Roosevelt Island – even got to  see the cables for the Aerial tram I wanted to go on but never got time. There were lots of tolls and bridges as we made our way through the industrial areas. I made us stop off at Stamford looking for the university until google informed me that the university is called Stanford and is in California. Damn my memory for being shitty! 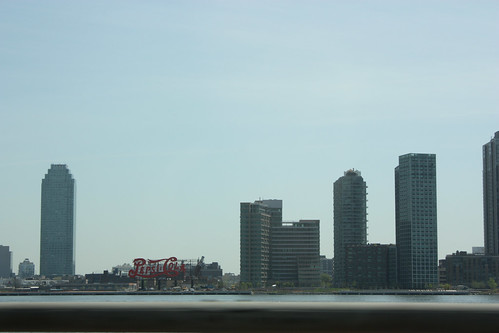 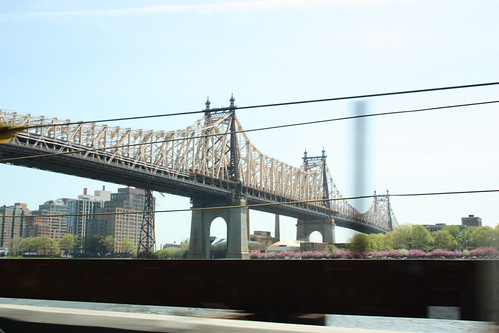 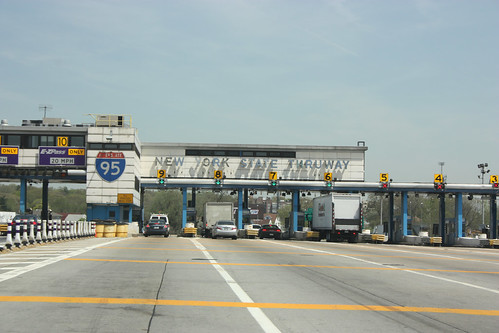 By now I was busting to go to the toilet so we decided to stop at the Conneticut Welcome Centre but I miscalculated and made us turn off too early and the road took us past it so it made it pointless to turn back. Instead we went to the toilet at Trader Joes grocery store in Darien and made a picnic lunch out of the food we bought there. We used the GPS to find a nearby park which was lovely and cool and we sat on the ground to eat it. All the food we’s bought from Trader Joes was really yummy. I’d heard Trader Joes sold good food and I wasn’t disappointed. Lucky Pauline likes picnics! 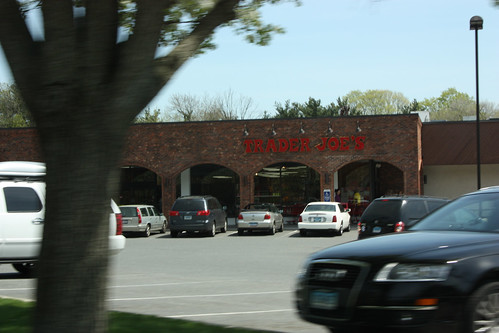 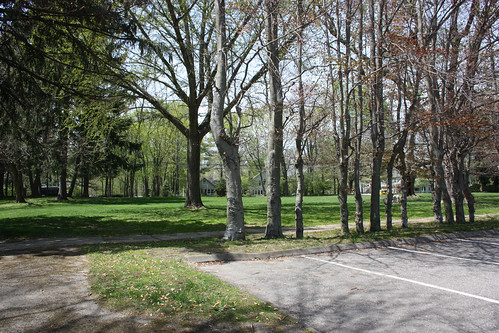 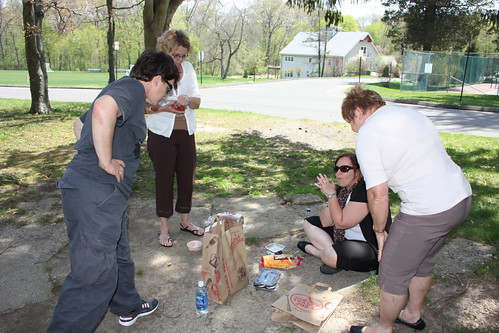 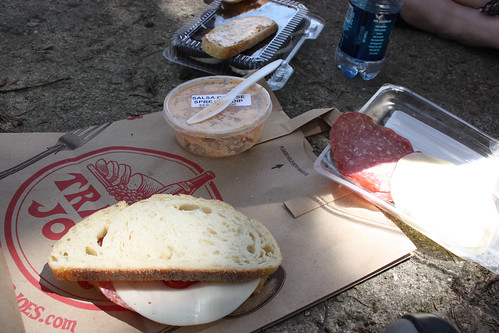 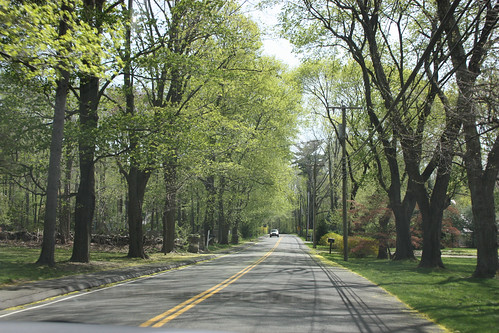 On the road again and it was time to knock off some miles on the road trip so we weren’t stopping again until we needed to go to the toilet. The drive took us through Conneticut, Rhode Island and finally Massachusetts. The nicest towns we saw from the road were Providence and Fall River, the GPS and I having a little argument in Providence when it wanted to take us on to a freeway ramp that was closed. It gave us the opportunity to drive a little through Providence which is the capitol of Rhode Island. A really pretty city and I think it was the subject of a tv show called Providence strangely enough. Fall River was really only viewed from the bridge as we passed through and looked to be a city of churches. Really lovely houses on the river but we had no time to stop cause we had a deadline. 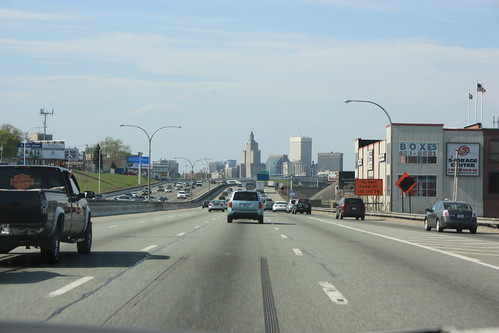 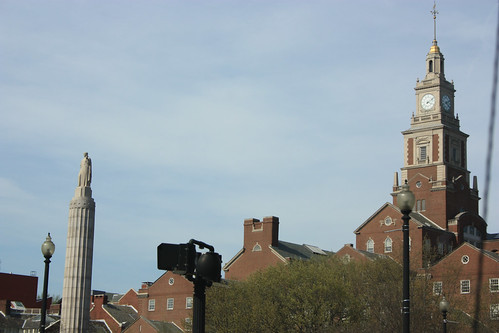 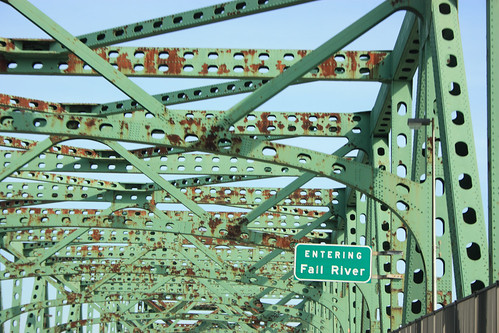 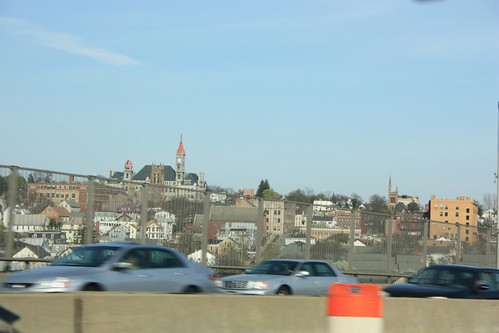 Finally our bladders had enough and at the cape cod information centre loo break we picked up brochures and everyone bought a lottery ticket (except me). Drove down highway 6 until the Chatham exit which was our stop. Drove through the pretty town after pausing to view a policeman who had pulled over a truck. Finally nearing nightfall we made it to our luxurious accommodation at Chatham Bars Inn. I’d picked this hotel from a travel zoo deal as a special treat for us and it was. There is a main lodge but we stayed in the cottages nearby that overlooked the golf course – they were the “Seabreeze Cottages”. A Fireplace in the room, big bathroom and queen sized beds kept us rather happy. 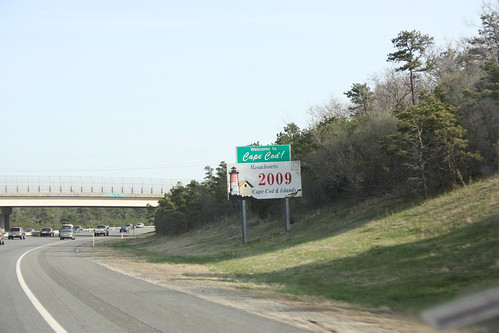 One of the cottages at Chatham Bars Inn: 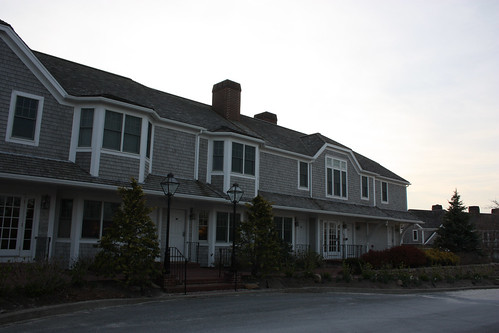 Our room at the Chatham Bars Inn: 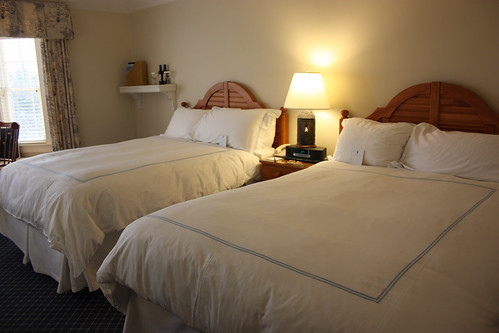 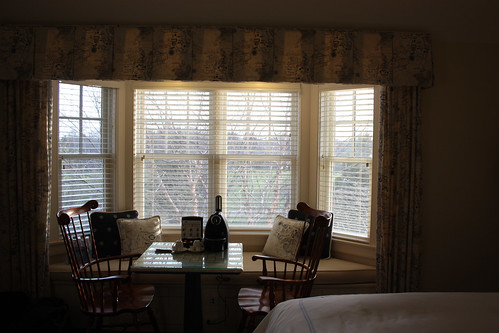 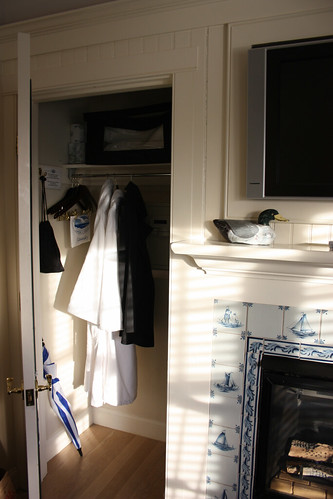 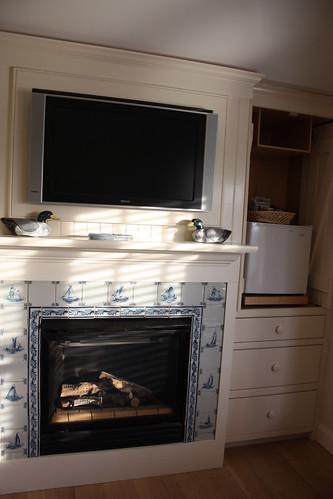 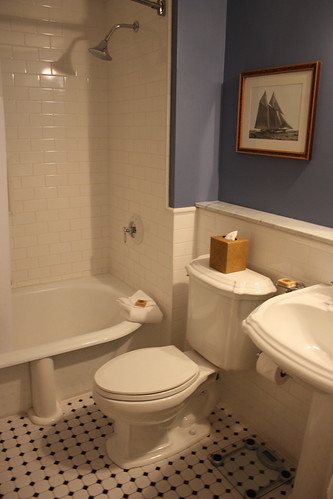 Sue, Mum and I went on a hunt for dinner not long after we arrived. Tried Nickersons on an internet recommendation but it was closed for the season so we ended up in The Red Nun, a place for locals. Its more of a pub tavern but we ordered fish and chips to go and a rum and ginger ale to wait. The guy asked us if we wanted a split bill and I think we said no but changed our minds after he did the bill. That kind of annoyed him of course, but we left him a tip and a $5 australian note to put on the wall behind him to go with the foreign notes. Outside the pub there were people playing in the baseball field as well which was interesting to watch. On our return we ate dinner at our bay window. The fish was stunning, mushroom soup was yum, chips were not so great, salad was a wedge of lettuce with bacon and carrot. A wedge! There was no way we could fit in the salad, so we chucked it in the fridge. Glad to be relaxing out of the city and it was time for bed. 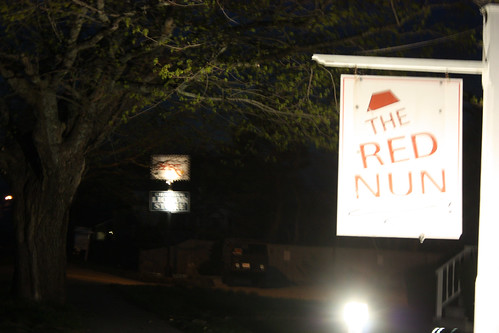 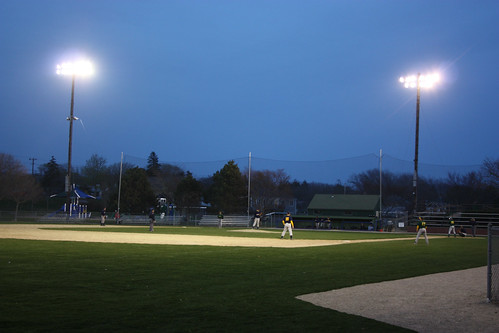 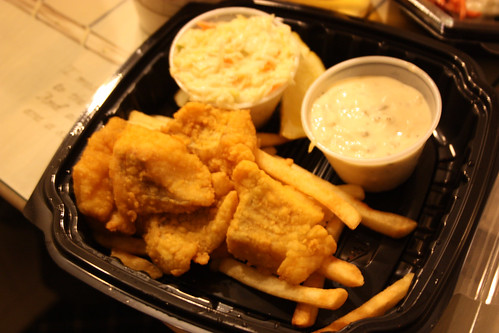 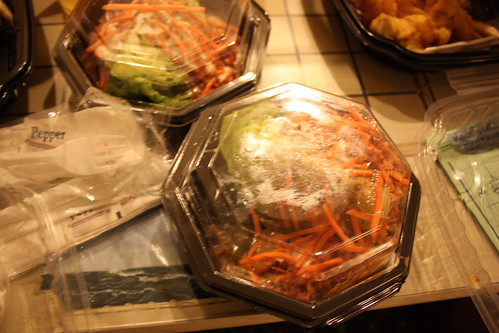 The plan was to leave NY this morning, but they don’t have a minivan here and are trying to find one. Never mind that I booked 2 weeks ago.
Been sent to our third alamo store in search of a minivan. Fucking pissed off now even with the discount they’ve given us.
@Kelsbells the swine flu isn’t too big of an issue in the us. Mexico is suffering a lot more.
Finally got the frigging car and we are on our way! No more Alamo for me!
@matthew_hall I know better now. 🙂 unfortunately subject to who has minivans.
Picnic lunch made of produce from trader joes in a park in Darin conneticut. Lovely green suburban park.
On one side a golf course, the other the sea, our new lux cape cod hotel is the opposite to our NY one.  http://twitpic.com/46k4r
@j3thr0 hope u don’t get a holiday hangover.
Just had some fantastic cape cod fish and chips. This place is the perfect location to recover from the fun of NY.  http://twitpic.com/46rvz
@j3thr0 most of the time we are sharing, sometimes we have leftovers for later. Rarely do we eat it all by ourselves. 🙂
Its so much colder up here, the breeze had a chill. New York had record heat for the season while we were there, cold is a shock now
Chilling by the fire, I’m pretty relaxed right now. I may have also had some beer and rum.  http://twitpic.com/46xdg