A beautiful warm day in Chatham made us not want to leave. We spent the morning repacking our bags with the now clean clothes and while Sue and Fiona had breakfast in the hotel Mum, Pauline and I went for a walk in front of the main lodge along the beach. We left Pauline at the road and walked down to the Boathouse and past the Bar and Grill to the swimming pool. The pool was huge for the summer crowds and a painter was there sprucing up the white paint in preparation for the start of the season. We found the beachside cottages which must be expensive in the high season and bowled a quick bowl on the bocci field next to the great lawn. Back up to the hotel, check out and we were on our way. 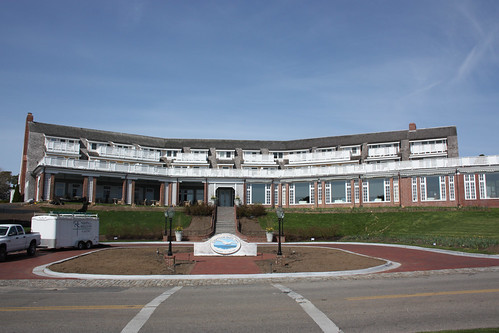 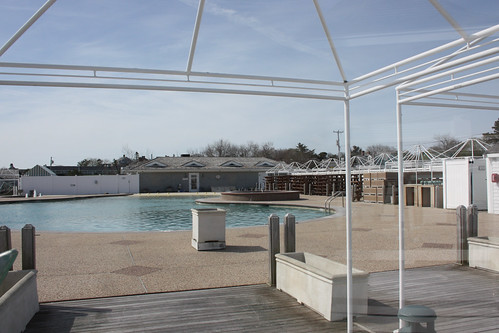 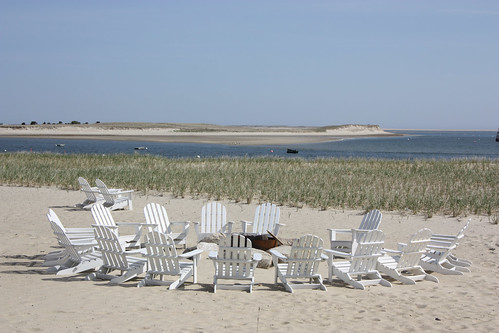 Leaving the cape we stopped at a McDonalds just off the freeway for a surprisingly nice Chicken Club burger then we made tracks for Salem which is 30 minutes north of Boston.

A good looking mcdonalds burger? Almost unbelievable but it exists: 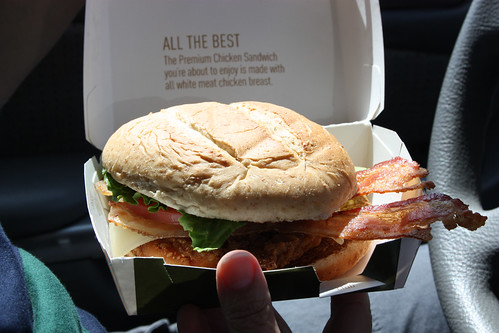 Near Boston we got to take advantage of the tunnels created as part of the “Big Dig” as we drove past the airport and up towards Lynn. We had a lot of fun with the name of the town since my mum is called Lynne. 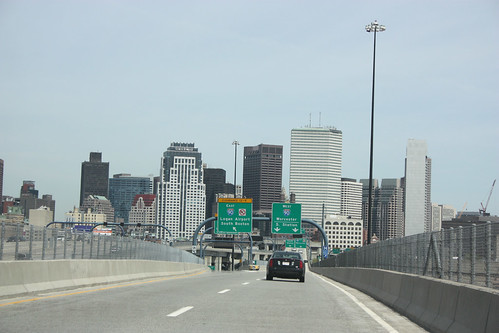 A tunnel that forms part of Boston’s big dig: 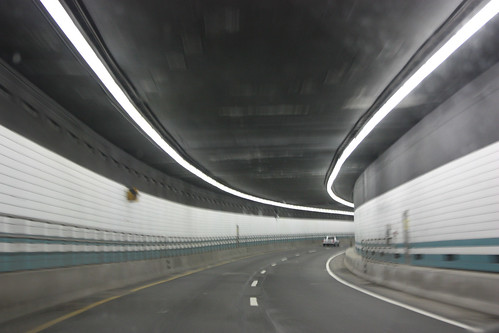 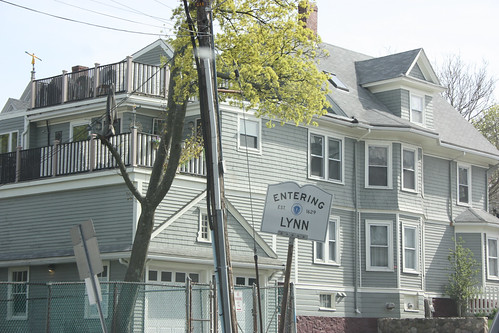 In Salem we parked in a shopping mall carpark, tried to find a toilet, bought some dunkin donuts then visited the Salem Witch Museum. The museum is in an old church and we had to cool our heels for 30mins for the next showing. We hung out in the store, then entered the main room in the church. It was a huge dark room with chairs around the edge and a red circle at the top of the room with the names of all the victims of the Salem witch trials. The show began and basically they used mannequins in scenes that helped tell the story of the witch trials. It was really interesting to learn that young girls basically started the fear which was mostly a revenge thing. Once the display had finished which was cooler than it sounds, we went through another section that showed different types of witches, from the first pagan midwifes, through to the green witch of Oz to todays wicca witches. 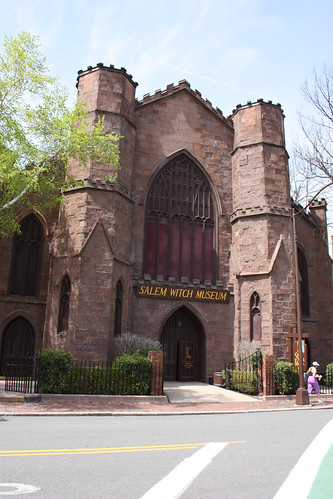 After the museum we visited the visitor centre and then went down the mall to the Bewitched statue, which is Samantha from Bewitched. Its a pretty ugly statue, but hey its Samantha from Bewitched! We walked down the street a small ways and bought some yummy soup from the New England Soup Factory which was a yelp recommendation. I had a chicken pot pie, Pauline had a beef stew and mum had clam chowder with corn. 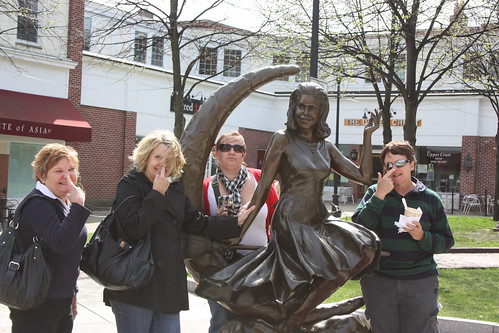 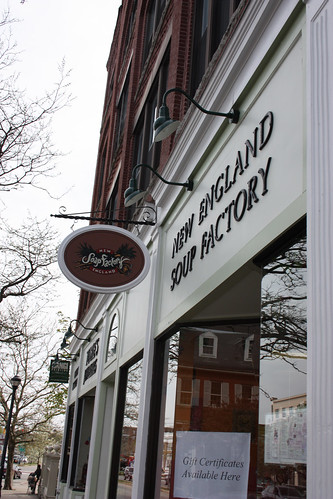 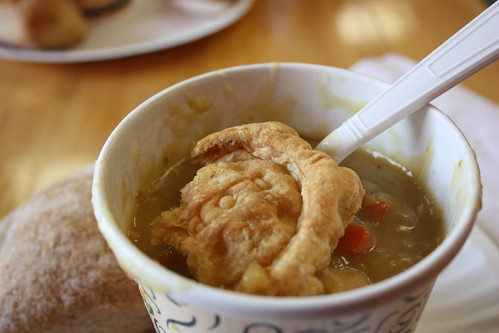 Back to the car and back to Boston, because even though we had the car till 9.30am the next morning we wanted to get it back before the 6pm closure of the rental office. More tunnels to get to the hotel and by some fluke we managed to take the right exit from the tunnel since Candy the gps doesnt work in tunnels. We dropped off all the luggage, I checked in and then left mum to handle it being taken to our room while Pauline and I dropped the car back. Luckily it was in walking distance from the hotel near the aquarium, so after making sure they didnt charge us for petrol and took off the inconvenience payment we left the car and walked back. 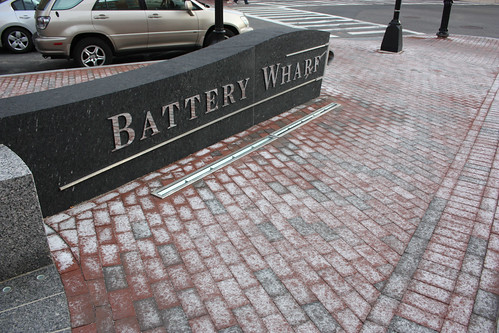 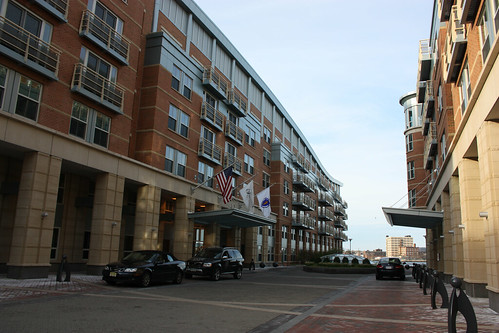 It was really easy to see where the freeway used to be before the tunnels were created and the green space makes Boston a really pretty place to be along the harbour.
Back at the hotel we found mum in a chair in the middle of the room because I had asked her not to touch anything until I took photos. She didnt even sit on the bed! The room had a fantastic view of the harbour, a huge 42 inch tv and a wonderful bathroom that even had a toilet door for the toilet. There was also a speaker in the bathroom that played the sound from the tv.

Our room at the Fairmont: 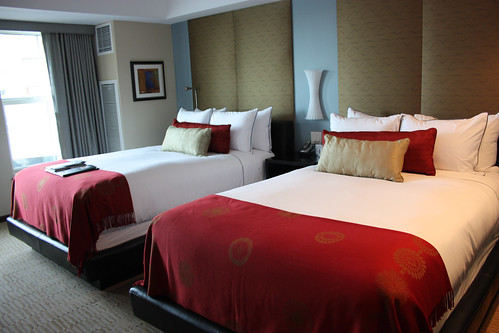 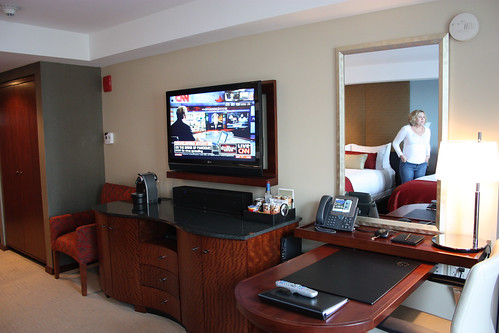 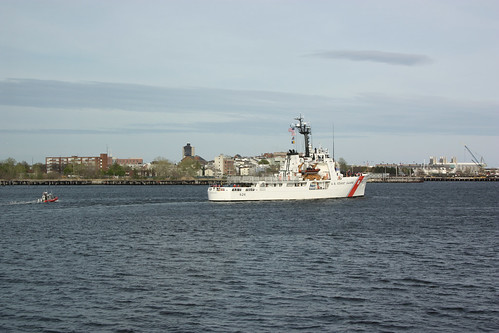 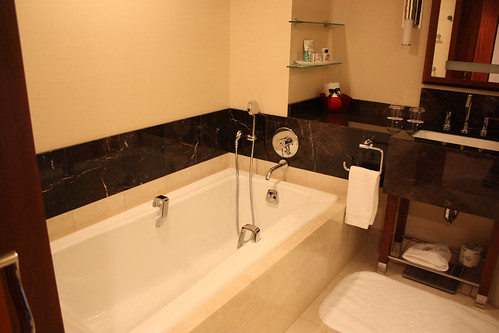 After waiting a while to hear from Auntie Sue since Mum didnt know what room she was in. Pauline got hotel operations to transfer her to auntie sues room and we decided to go for a walk. Started down the same walk that Pauline and I did but turned off towards hanover street for some italian dinner since it is little italy. We found nowhere that served both pizza and pasta so we gave up and went to quincy market, but not before mum got sick of looking for food and went off on her own. The rest of us looked at the shops in Quincy Market and then bought dinner. We all ended up getting pizza in the end and I bought a cassis lime rickey which was fantastic. The rest of them agreed and I had to go back and buy another one for Pauline and I and one for Fiona. 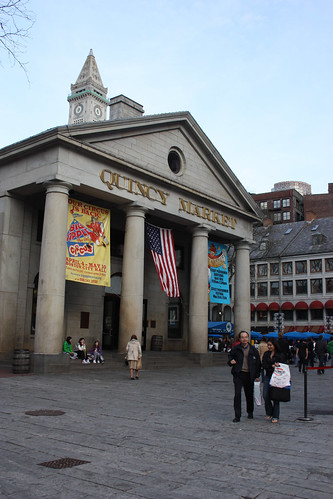 Cassis Lime Rickey and some pizza: 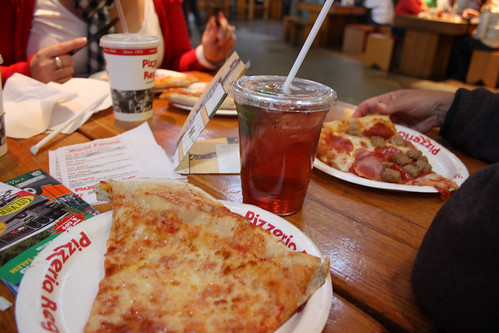 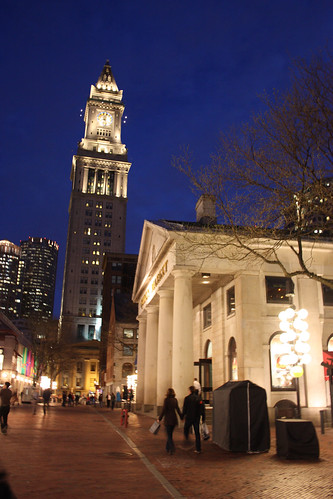 A spooky ghost tour trolley with down under lights: 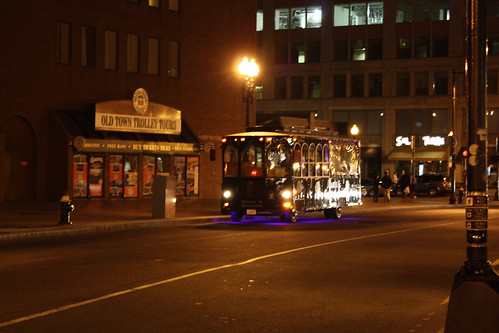 After some more shopping where Auntie Sue bought some boston goods, we walked back to the hotel to enjoy the bath, view and tv. There is a building just beside the harbour which is selling one bedroom apartments starting at a million dollars, so it was nice to live like one for a few hours. Mum had been enjoying the room and was already in bed when we arrived. Sleep came easily for me too.