Had a fitful sleep due to a 1.30 scare when it sounded like someone was trying to get in to our room. At the time it was scary but now I think it was due to the fact that the desk had changed our rooms at the last minute but didnt give us the new numbers. We ended up in a room with a king and sofa bed.

The view from our hotel room when we woke up: 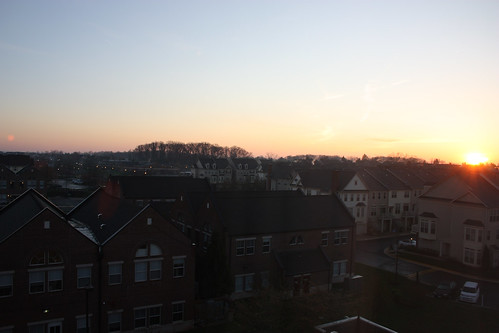 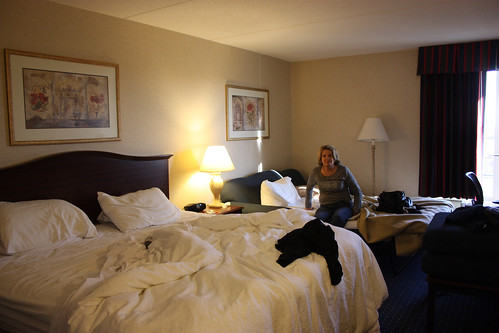 The outside (you know we are the USA because of the flag): 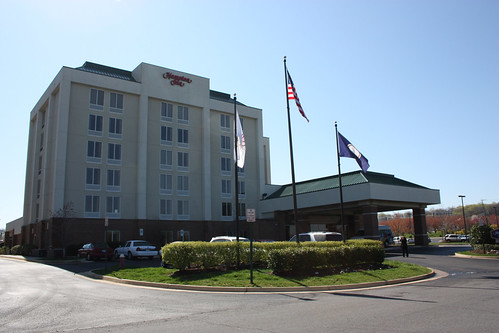 Breakfast was pretty good considering it was free. All the usual muffin and donut carbs the americans are fond of but there was also fruit salad, yoghurt, healthy cereal and juice. There were some fake looking eggs and a weird muffin creamy sauce thing too but I only tasted them. We took some fruit and yoghurt to go as well.

This was the lobby, the breakfast area is right behind it (it’s fake old): 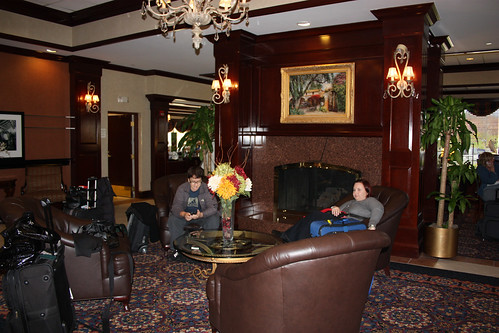 Had a lovely chat with the staff about trying to get in to DC, they offered some shuttle bus solutions but they all turned out to be not very direct, so we decided to take a cab which costed us about $90. He turned up in a lincoln navigator SUV and we were concerned it wouldnt fit us and the luggage but it handled it really well. Took us about 40 mins to get to DC and we past signs like Langley and trees that made me think of Silence of the Lambs. He drove us down Constitution Avenue where we got our first sight of the White House and the Washington Monument. Then dropped us in front of our hotel.

The Hotel Monaco, our hotel for the next few days (it’s real old – used to be a Post Office): 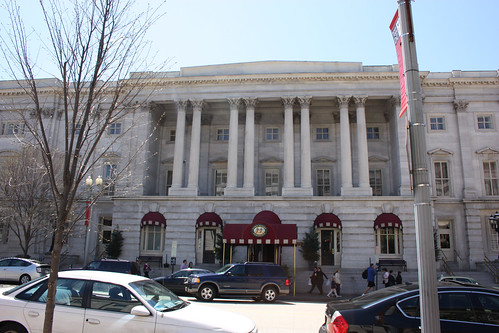 Checked in, left bags in one room cause the other room wasn’t ready, asked for rollaway bed there.

Room will all the bags in it and the pimping bathrobe: 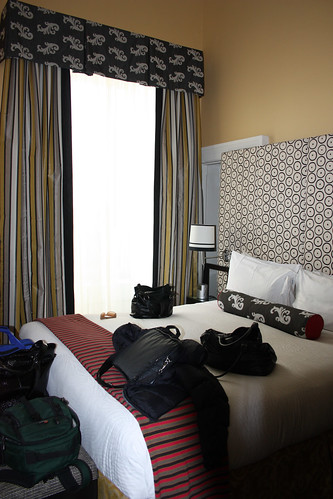 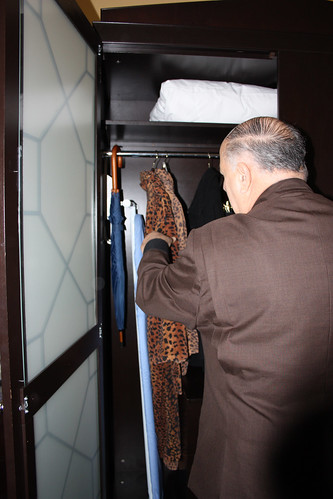 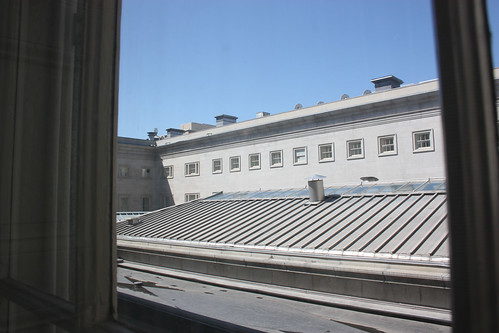 Went across the road to find out about the hop on hop off bus, decided to go to mt vernon instead because it was sunny. Caught a train from centre to huntington, then a bus to mt vernon. The train showed us lots of cookie cutter homes that were clean, the bus (151) showed us some cheaper houses but they were mostly well maintained.

The cool caverns of the Washington metro: 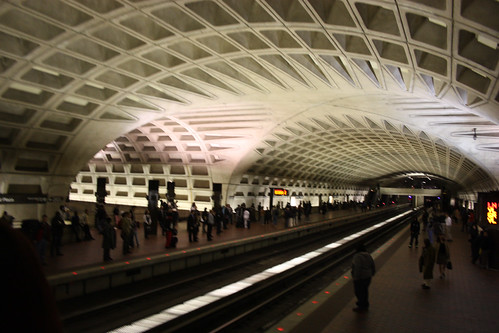 Look! The trains a woody! 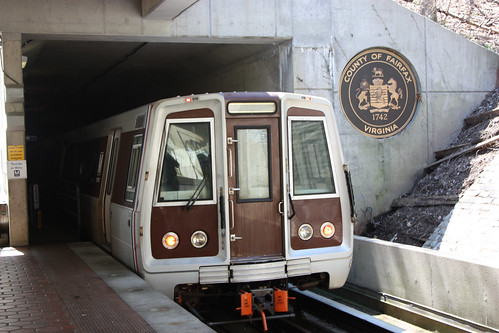 The bus stop in Huntington: 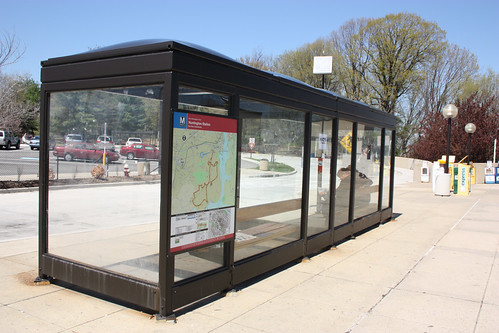 Mt Vernon Estate was George Washingtons home. Costs us money to get in, we watched a video that made us all nearly drop off due to jet lag. Outside we lined up behind long line to get in to the house. Then we took it in turns to hold our place in line while we looked at the rest of the estate. Slave quarters, greenhouse, smokehouse, laundry, stables. Escaped lamb.

George Washington’s house, which he owned before, during and after his presidency: 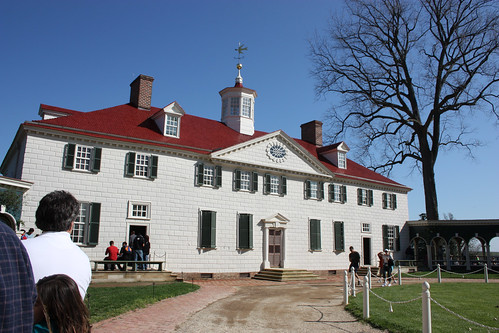 Sitting on the back porch: 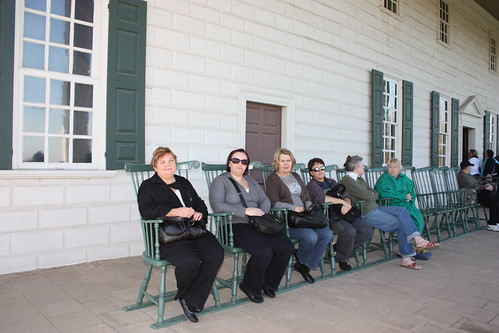 The view of the Potomac river you get from the back porch: 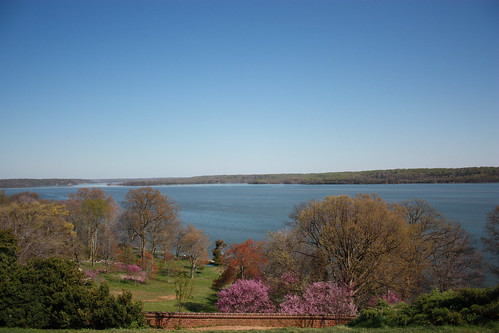 Leaving Mt Vernon. On the left you’ll seen the line which was shorter than when we arrived: 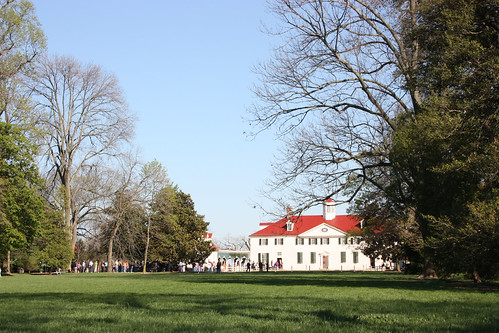 Inside house was green walls, tall fluffy poster beds, study, only saw two floors not three. Back porch had chairs to sit on, lovely view of the river. Very nice house and it’s no wonder he loved it. It had been renovated from when he first inherited it, it was a much smaller house in the beginning. I read a book about Mt Vernon for the rest of the trip which I had actually brought over from Australia. It left me with a little more affection for the house after reading it.

Bus back to train station (101) then train back to Chinatown/Verizon Centre. Dinner at Chipotle, huge mexican burrito with barbacoa. very filling with rice and black bean. Checked in auntie sues room, discovered rollaway in our room, tried to figure out how to make it fit. Saw auntie sues room, did a swap since it was bigger and enough room for rollaway bed. Declined a turn down service, pauline went to gym, i had a shower and then bed time.

Bed in the new room with the rollaway: 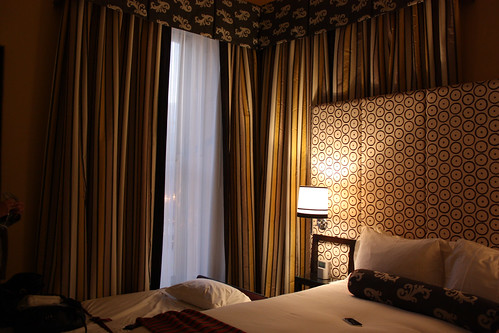 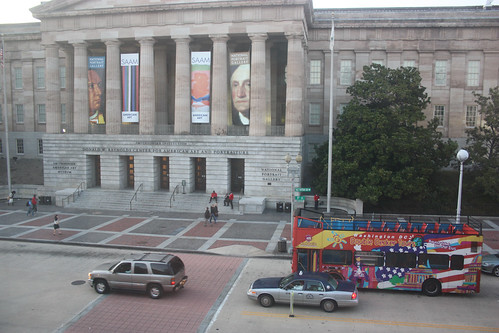 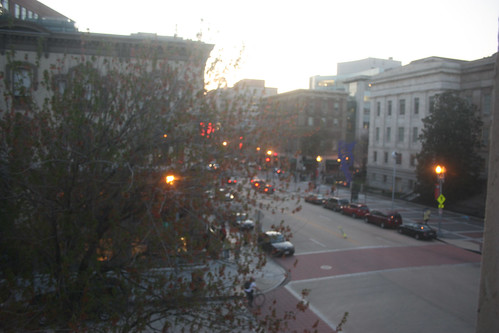 What us striking about the Dc houses I’ve seen so far is that they seem so new, bright and clean. Weird for a place with so much history.
Amount of times I think about Chevy Chase everytime I see a chevy chase bank? 100%. How many times have I seen the bank today? At least 8.
Amused that Fiona now understands the sims games a lot better due to our bus ride through Virginian suburbs.
At George washingtons house at mt vernon. Lineup to go in the actual house is 55 mins. Hope it’s worth it.
Auntie suism for @kelsbells dictionary – mt vermin. George Washington’s estate, more properly known as mt vernon
I like USA street crossings cause they count down the time left to cross. But they are missing the doot doot noise  http://twitpic.com/3fg1u
@dww84 no, an Aussie visiting the usa for a few weeks.
@zoedragon it’s funny cause I didn’t notice I used the sound until it wasn’t there to tell me to start walking 🙂
Spying on the spy museum from my hotel room.  http://twitpic.com/3fgu7
@jerrah I like the idea of adding pressure to the crossing. As if it isn’t exciting and dangerous enough!
Our first night in DC and we are woken at 1am by what sounded like someone trying to open our door. Scared the shit out of us.
The view from our cheap but good value hotel. Free breakfast and wifi, pool, gym and airport shuttle. Hotwire $48 http://tinyurl.com/ddqfxz
Stupidly packed a firewire cable instead of the USB one for charging iPhone. Hope fiona brought hers for iPod.
@iamhausfrau Yeah, good excuse to visit one. Not that I needed one. 🙂
@Kelsbells I guess i’ll wait then!
The place we are staying is a planned town. Terrace houses that all look the same, walk to the shops and even a town clock. Too clean!
@matthew_hall Hampton inn Dulles cascades. Think I’ve had enough sleep for now. 🙂
Free breakfast better than expected. Not all carbs. They have eggs and fruit even!  http://twitpic.com/3ec57
Wondering what the other 98% is.  http://twitpic.com/3ecpu
Can u believe this is the lobby in a 2.5 star hotel?   http://twitpic.com/3ecyq
@iusebiro thanks. Good night to u!
About to catch a cab into downtown DC. Obama is leaving town today. Must have heard we were coming.
All our luggage and the 5 of us fit in a Lincoln navigator SUV. Shocked!
All the scenery here is reminding me of the beginning of silence of the lambs when jodie foster is running through the forest.
Checked in to our new hotel in downtown Washington. Free wifi here too!  http://twitpic.com/3ekpn
@j3thr0 verdict?
@matthew_hall really? That’s fantastic! Much better than aus.