Woke up with a door knock and phone call at 5.30am to find out our house had been broken in to and the car had been stolen. We’d only been gone two days and had our first break-in in 10 years. The car was stolen along with some electrical items. Not a great way to start the day, so I decided to deal with it by pretending it didn’t happen. Pauline got depressed about it but busied herself making a list of everything that was in the car.

Breakfast was a muffin, banana from the hampton inn and free coffee from the downstairs lobby.

Went to the Crime and Punishment museum to figure out what we could do to the house thieves if they were ever caught. Saw the original bonny and clyde car (from the movie), paintings and drawings by John Wayne Gacy and Charles Manson, the bust of John List and the CSI experience. We bought the audio tour but it wasnt really worth the extra $3.50. They film Americas most wanted in the basement.

The car from the movie Bonnie and Clyde starring Warren Beatty: 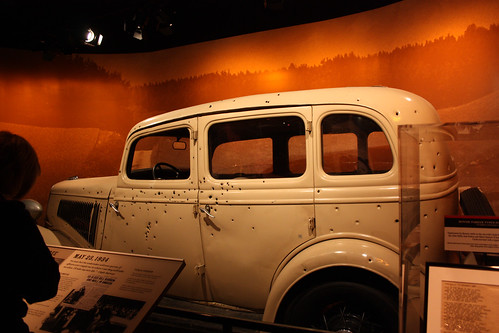 Auntie sue in the lineup because she stole the remote too many times. Note the crazy eyes and remote discretely held in her hands: 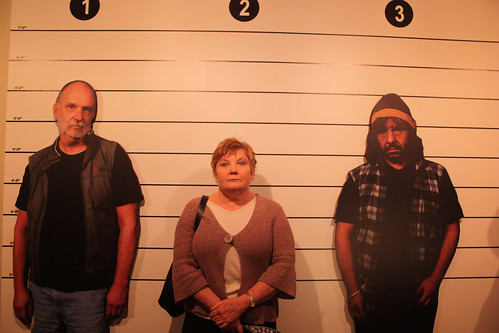 Pauline living out her fantasies on a police bike with flashing lights: 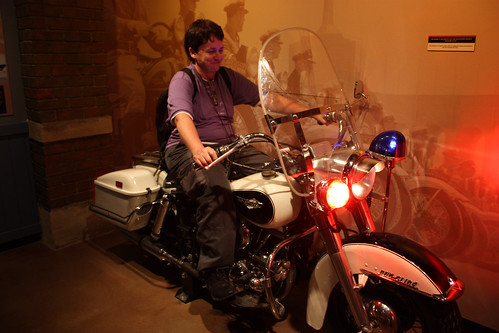 Fiona is America’s Most Wanted: 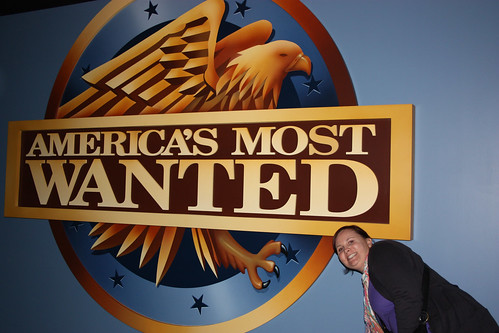 I locked Mum away until she escaped through the big hole I had failed to notice: 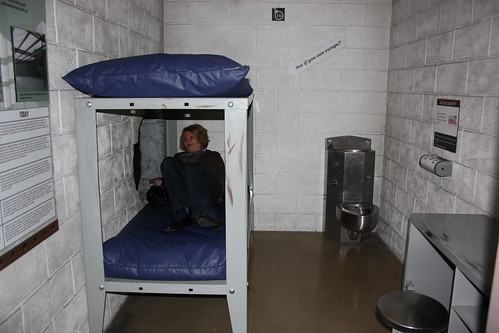 This is the CSI experience: 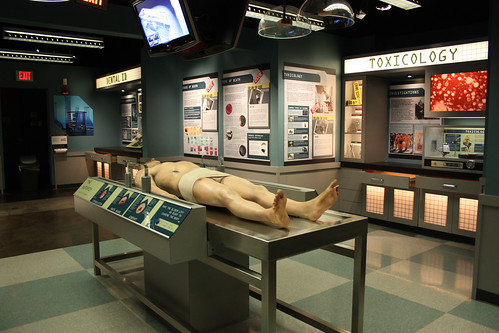 That took longer than expected, so it was about midday when we bought tickets on the hop on hop off bus. Had to wait 20 mins for the next one to come and then we took a slow ambling stop start ride through the city. Although it took us past all the major sites, it was such a painful experience that we were dying to get off by the time we got to the Lincoln Memorial. The commentary wasn’t bad, but it was a recording that got repeated sometimes 3 times due to traffic stops. 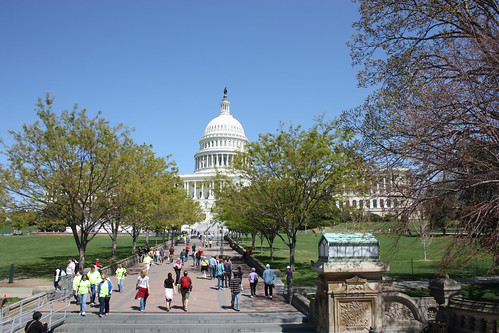 Jefferson Memorial with the Washington Monument in the background: 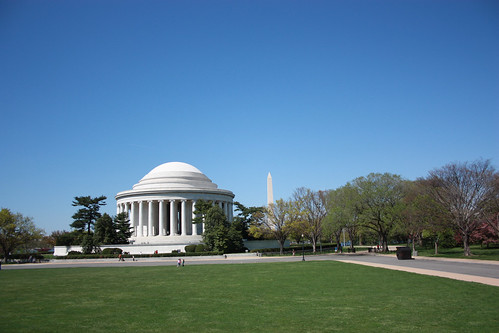 At the Lincoln Memorial we visited the Korean War display with the poncho men and reflecting wall. Then up to the big man himself, Lincoln. Its an impressive sculpture of marble and the view to the washington monument and capitol hill is impressive and reminded me of Canberra. 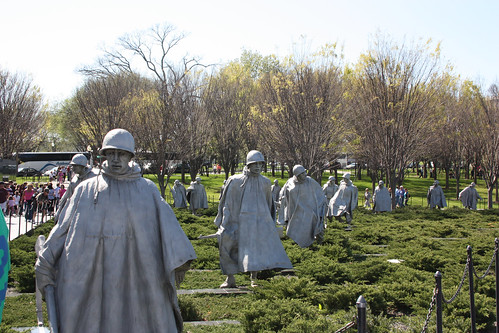 Statue of Lincoln at the Lincoln Memorial: 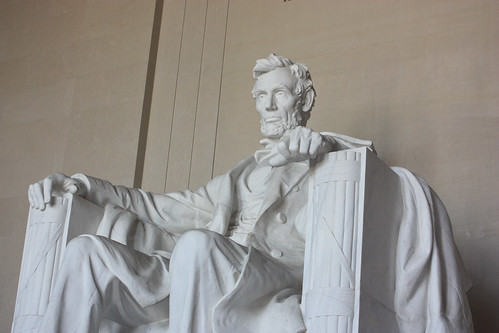 Walked to the other side to pick up the blue line bus to Arlington Cemetery but there were no signs to indicate where the bus stopped. We waited about 20 mins but decided to walk when we saw that the last bus to Arlington left at 5pm and it was after that time. We had just gotten over the bridge when the bus passed us – typical. At least we discovered the metro station and the cemetery were close together and we still had 2 hours to see the cemetery.

Official looking helicopters kept flying overhead, this one over the Arlington Memorial Bridge: 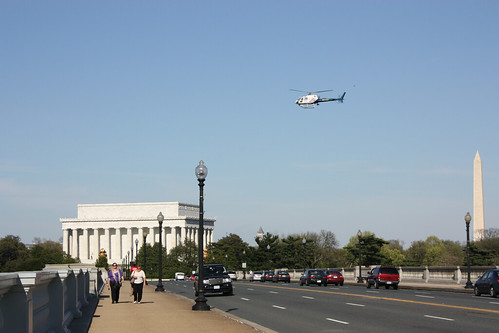 Bought the trolley bus tour to take us around the cemetery for $7.50 since we were short on time. It took us to JFKs grave where Jackie and Robert Kennedy are also buried. The trolley then raced up to catch the changing of the guard at the tomb of the unknown soldier. It was an intricate display of military flair. Gun inspection, legs clicking and saluting. They changed the guard and then they changed the wreath. Also a colesium there for formal occasions.

Entrance to the Cemetery: 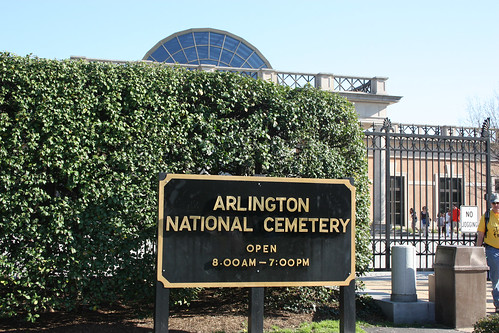 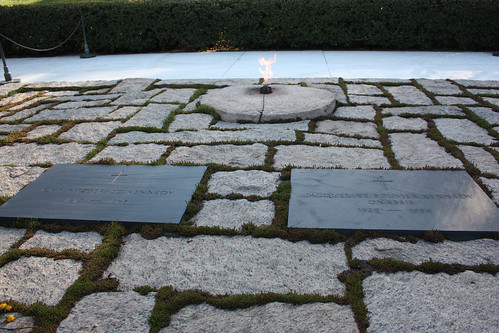 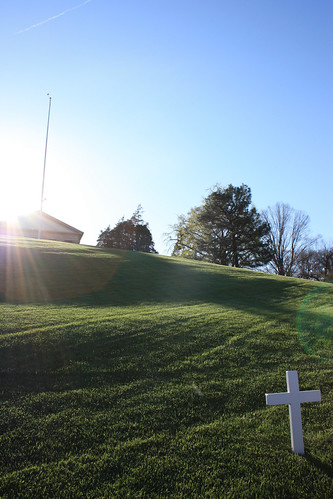 Changing of the guard: 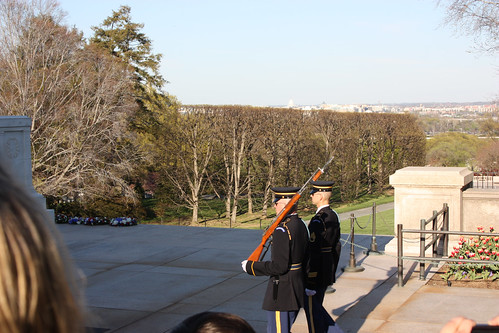 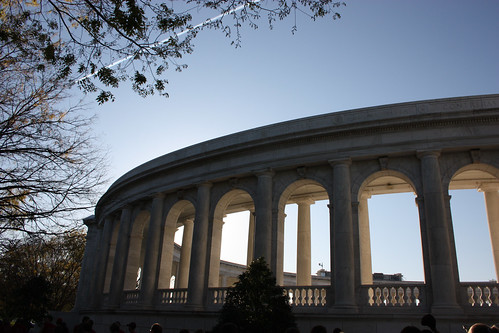 Next stop was Arlington house where we almost didn’t get off. The view there was lovely though until I blew my nose and made it bleed like a bastard. We shoved tissues at it to stem the flow and eventually it stopped. Guess it was caused by the sinus issues ive had since we left Australia.I guess you could say I left blood on the grounds of Arlington National Cemetery. Arlington House was owned by Robert E Lee and has a great view of Washington and the Lincoln Memorial. It is said that the house and memorial line up to signify the joining of the north and south at the end of the Civil War. 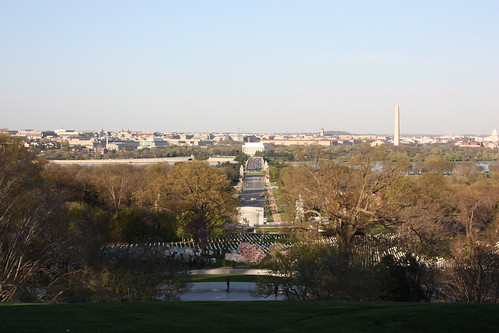 The tour ended then and we caught a train back to Union station to meet up with the Night tour. We were impressed by the inside of Union Station, but not by the lineup for the tour bus. It waited there for ages, stinking us out with fumes. It looked like it was never going to leave because there were two seats still empty up stairs, so we said we’d sit down the bottom while Auntie Sue and Pauline sat up the top. Hard to take photos at night through glass so we didnt really get any nice photos. Eventually we went upstairs after some people got off and it was pretty cold. The commentary was the same as the day tour so we were pretty bored hearing the same stuff again. Cant really recommend the Double Decker Tour bus for those reasons. 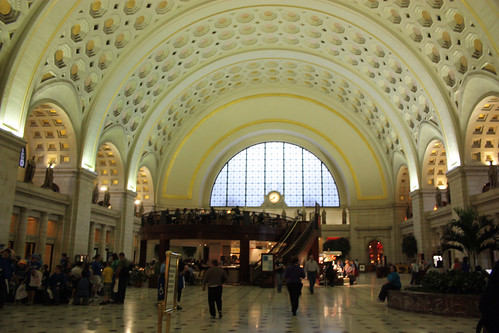 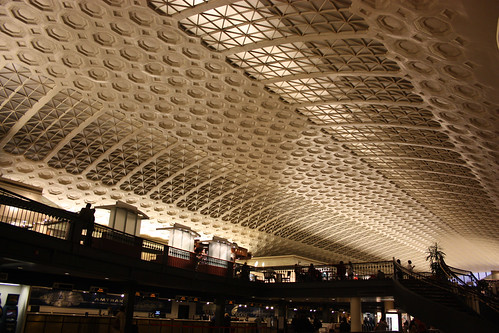 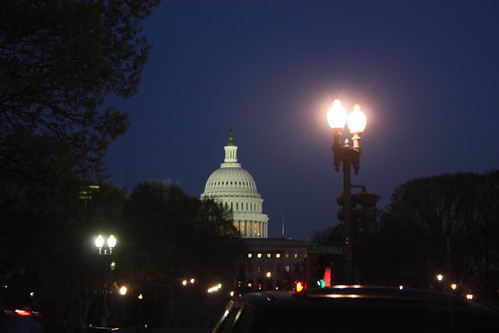 Washington Monument rushing past on the bus: 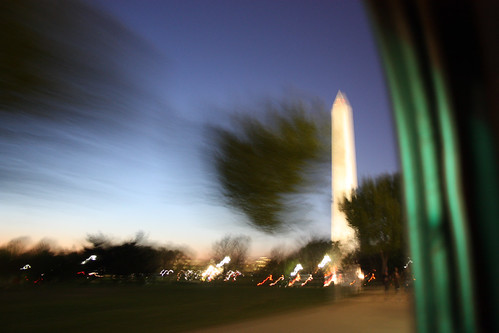 Got off near our hotel and went and bought some cupcakes from the store I’d spied as we drove past. It wasn’t dinner though so we had to settle for mcdonalds since we weren’t up to a full service menu situation. The door to mcdonalds was guarded by a policemen and as we walked past there were about 5 people with the arms against the wall with their legs apart in the “patted down” position. By the time we got our dinner and came out again there was about 3 cop cars and lots of talking going on. I’m not sure what had happened but the area around the Verizon Centre seems to be a meeting place for young people. 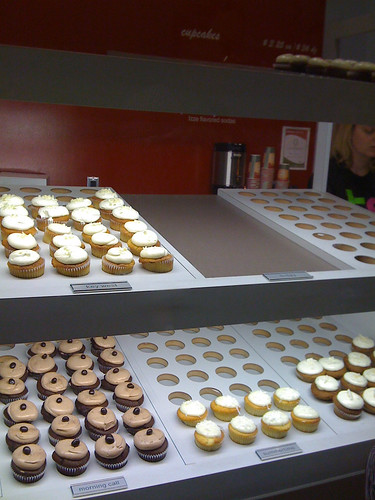 Ate our dinner in our rooms and then off to bed.

Chocolates thanks to the turn down service: 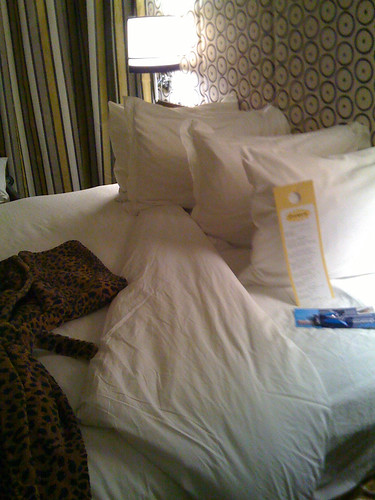