Breakfast was an array of cold frittered fruit and cold pineapple pancakes which wasn’t too bad. Probably the most unique breakfast I have had so far. We were up early because we were all going for a bike ride to the beach. A few dipped out though due to belly sickness or uneasiness with the bike. 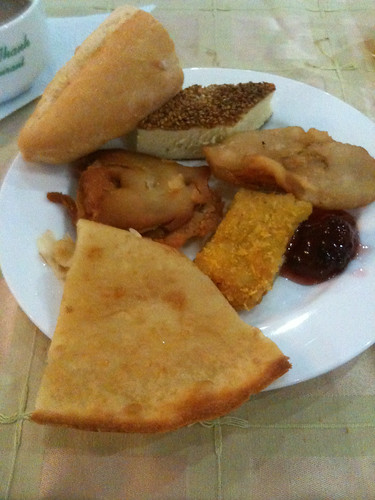 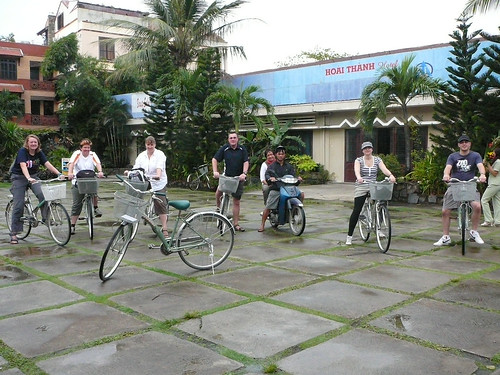 Our first stop before the beach though was a shoe shop which I was excited about. They will make any kind of shoe you show them including, yes, sneakers. However, when I saw the quality of the sneakers on display I was sadly let down and decided not to ge any. The material just wasn’t the same, the heel cushions were poor quality and they put different brand soles on other brand tops. Totally not worth it to me even if it is personaly fit to my foot. The other type of shoes however seemed great and a couple of people got some boots and slippers made. The boots were especially good for Mel cause she said she finds it hard to get boots that work with her big calves (this is what she said). I can just imagine people travelling from overseas with brochures and empty bags and walking away with their cupboard for the next year. 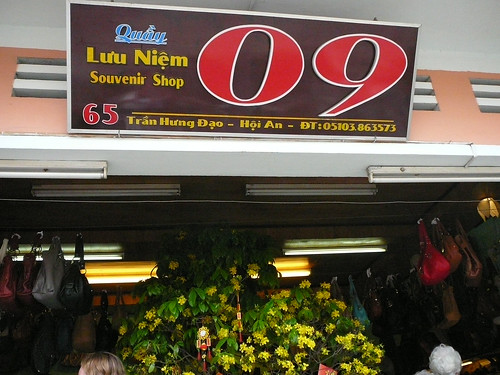 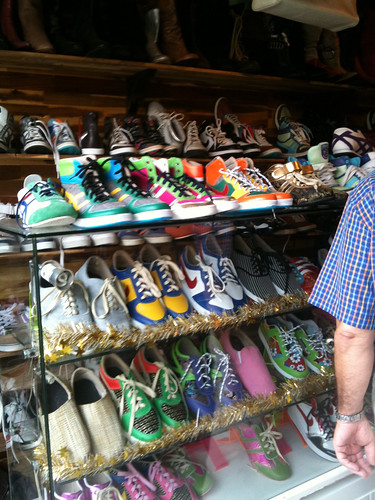 After the shoe shop we headed off to the beach. My sore throat from the day before had turned in to a chest infection by luckily I had antibiotics in my trusty medical kit. I took them before breakfast and although it was probably unwise to go bike riding my desire to do it overwhelmed my sanity.

The bikes were single gear and in good condition although there were squeaky brakes. We didn’t ride fast and it isn’t that scary riding in town because cars and scooters are used to cyclists. Plus scooters don’t go very fast anyway. The route took us down back streets and in to agricultural areas with the rice fields and palm tree drying lanes. Everywhere we went people waved or said hello which is really nice – especially when you consider what white people have done to the vietnamese over the past 200 years. 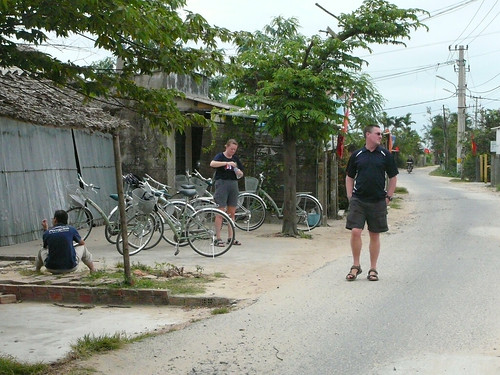 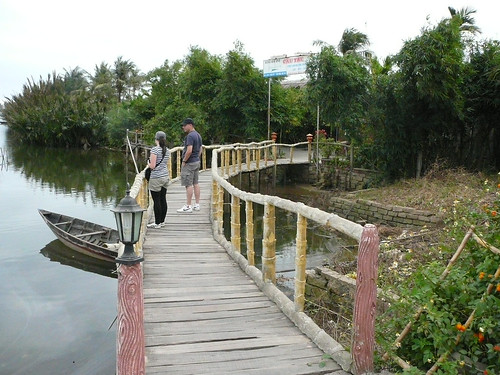 By the end of the ride I was feeling it in my legs (cause I had the seat too low) so I was glad to reach the restaurant where we parked our bikes. It was overcast which didn’t exactly make the beach appealing but it was easy to see that this would be great on a warm day. Lots of palm huts, restaurants and sand. There were many people hanging out between the flags, but basically we just dipped our toes in and took some photos. We were sitting resting when a girl came up with a bunch of beads to sell us and the first thing she said was “don’t be lazy, be crazy!”. Mel asked her who taught her that and she said Aussies. She said she like Aussies, didn’t like the French, was learning English so she could get a better job and she rode 1 hr on her bike everyday to sell the beads. The beads she has to carry are really heavy but unfortunately she was asking way too much for them. 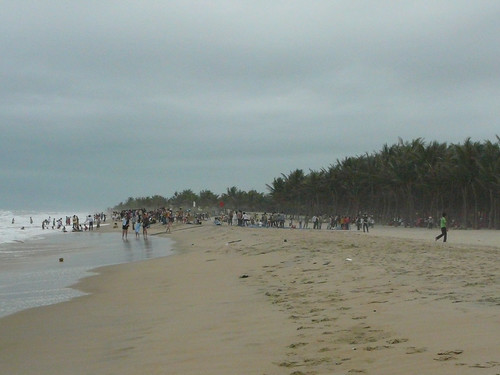 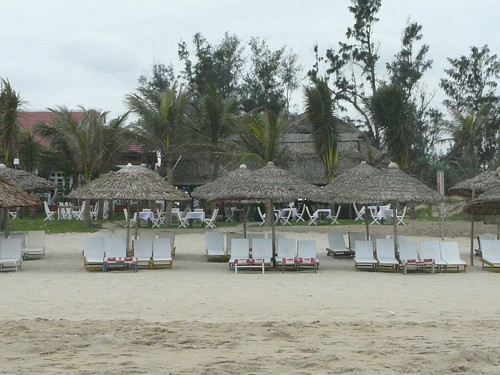 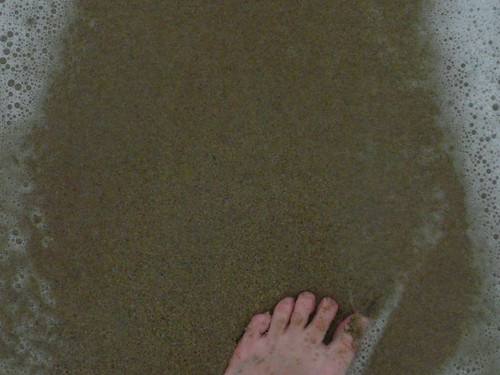 Having enough of the beach and a few of the others wanted to go back for their clothes fitting we left without buying or eating anything. The way back was a lot quicker cause we took the direct route. By the end of it my thighs were screaming so I had a bit of a rest to recover.

Left alone to my own devices I went out for another walk in the old town and lunch. Ended up at the mango lounge where I had some lovely Ginger lemon tea and an awesome meal called “La Cubana”. It was beef cubes with mango and tomato chilli salsa and rum. The chef was vietnamese and had travelled the world only to return and serve up fushion dishes. 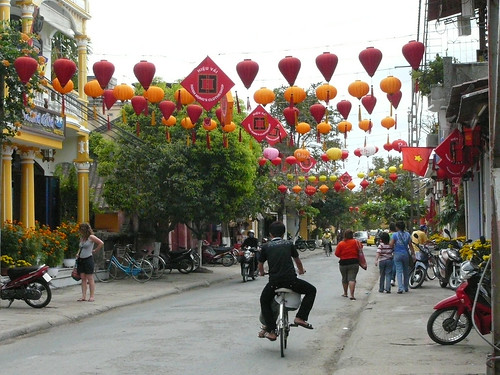 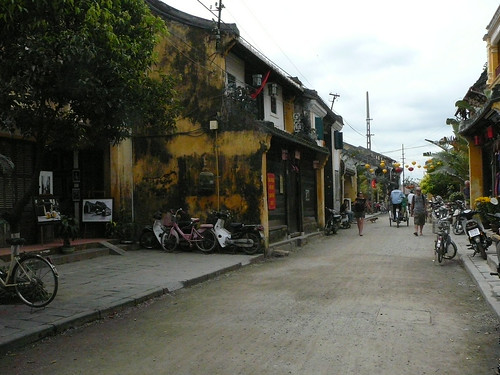 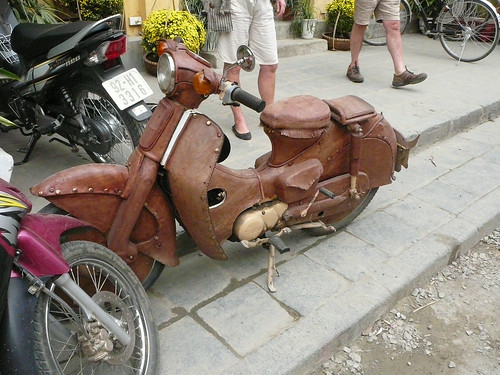 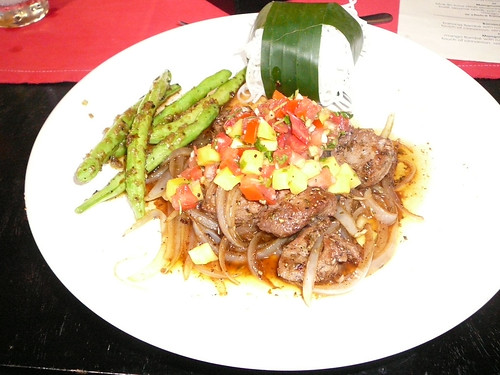 Afterwards I walked through the markets where fruit and veg was sold to locals and trinkets were flogged to tourists. Yes I saw meat carcasses but it didn’t smell too bad. Te touts were a little annoying but I have become adept at ignoring them while still being friendly so it was ok. I went back to the room after that to rest since my legs were now murder and my chest was asking for reprieve. 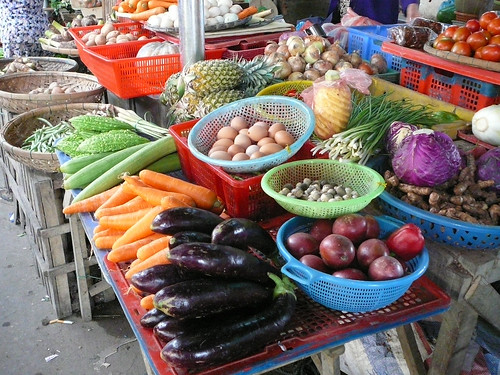 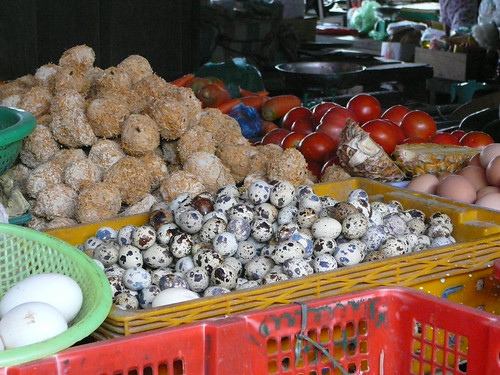 Didn’t go out again until 6.30 which I thought was the dinner meeting time. No one was there though so I figured I got the time wrong so went food hunting myself. Went to Tam Tam restaurant in the old town and had the local specialites white rose and Cau Lao. I’d had Cao Lau the night before which was better. The white rose is rice paper shaped in a rose surrounding a piece of pork. You dip it in sauce. Kind of ok but the only flavour came from the sauce. Had a menthe with water drink which was very interesting – green at the bottom tasting of mint. Then it was back to the hotel were I struggled to sleep because between the hard bed, coughing and painful thighs, I was finding it hard to get comfortable. Fell asleep finally to Beethoven the movie. 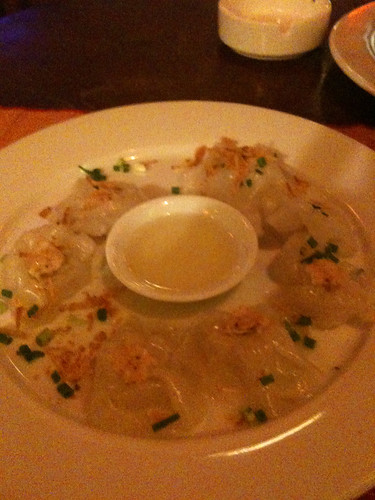 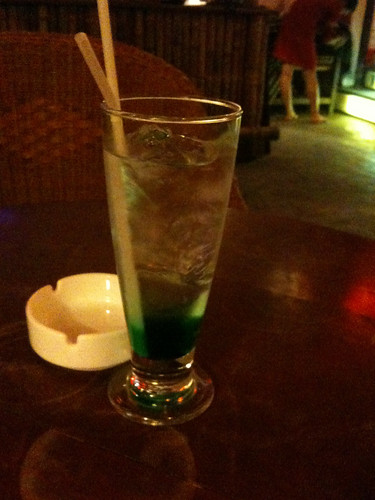 amyob: Jodie foster is in a film that mentions Brisbane. In some sad bizarre way I find that cool.