5.15am wake up to catch a mini bus to the Mekong Delta at 6.30am which would take around 12-13 hours. Only problem was, when we got down to the lobby Hui told us that the bus wasn’t going to turn up until 8-9am. Bus driver wasn’t in Nha Trang yet or something. That raised all levels of annoyance with a few in the group since it threw the whole trip in to doubt. 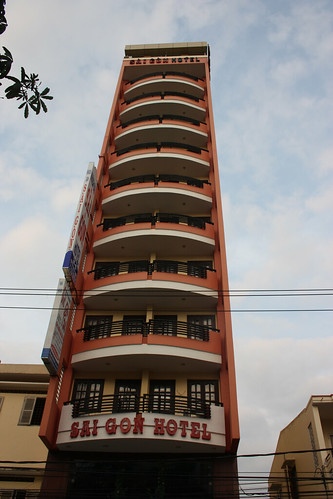 Since this wasn’t actually on the tour schedule and was actually a backdoor arrangement it was a bit dodgy. The new year festivities meant that the night train was all booked out with Vietnamese people heading home from the holidays. This meant that the people doing the big indochina tour would miss out on a day in Saigon and have to stay in Nha Trang. Nha Trang is ok if you like the Gold Coast but some people preferred to see the Mekong Delta. I didn’t know much about the delta but seeing that they were so passionate about it I figured I’d go along too. Mark the Brit tagged along as well which left Lisa and Luke (the aussies) to stay in Nha Trang with Hui our guide. We had to pay a bit extra to deviate from the tour to hire the bus, guide and boat ride.

The original plan was to drive to Saigon, pick up the guide and continue to the delta to do a homestay then get a boat ride the next morning. With the bus being so late, we wouldn’t arrive until maybe 11pm which wasn’t a good idea. A few of the women who had been harbouring a dislike for our guide really let it rip on him when the bus was late which I thought was unfair since it was the bus company’s fault. In the end we decided to stay the night in Saigon then do a day trip to the delta.

When the bus finally arrived we all piled in only to find that we still had to wait for the driver. So we all piled out again and went for breakfast. Finally left around 8.30am, which was funny when we walked past the hotel an saw the look on Luke and Lisa’s face over the fact that we were still here. 🙂

The mini bus was a Mercedes and I was lucky enough to stupidly pick the fold down seat. At least though with 6 of us we each had 2 to a 3 seat row so space was good. The first part of the drive was good with coastal views and large rocks while we dodged scooters, cows and bullocks with carts. Many buses packed with people and scooters with suitcases and 2 people hooned down the road. There were lots of cafes for people to stop that were basically just thatched roofs with hammocks underneath them. A good place to rest in the heat of the day. 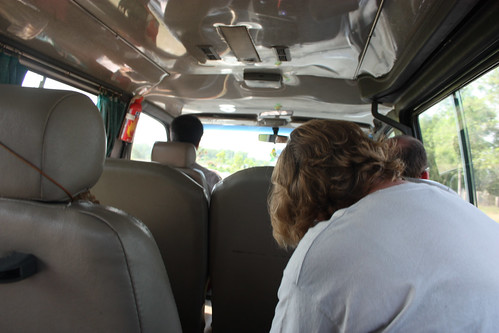 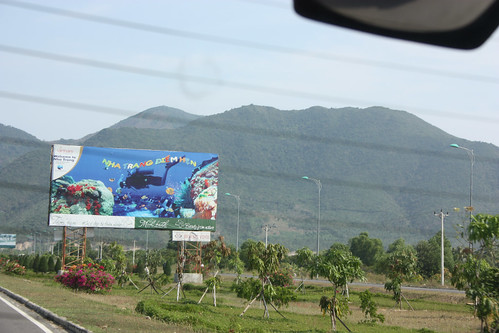 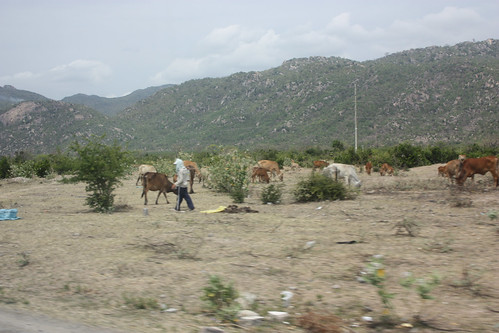 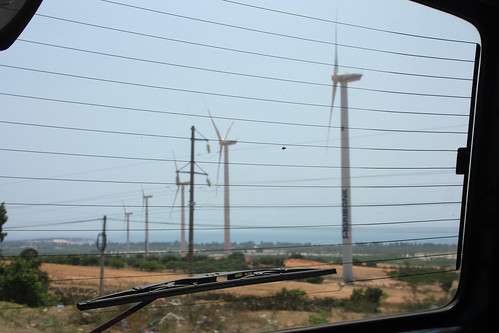 I had a moment where I felt like I was going to be bum sick so we made an emergency toilet break at a petrol station. The toilets were the foulest I may have had to deal with and I was very careful to line the seat with toilet paper – not something I often do. In the end though I wasn’t sick (thank god) and we were off again. 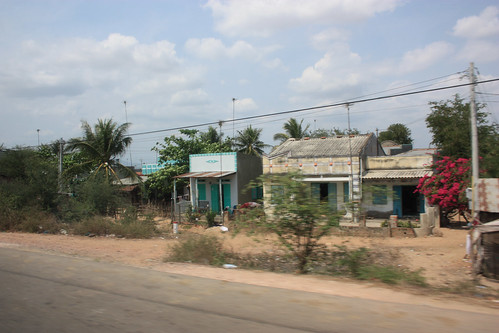 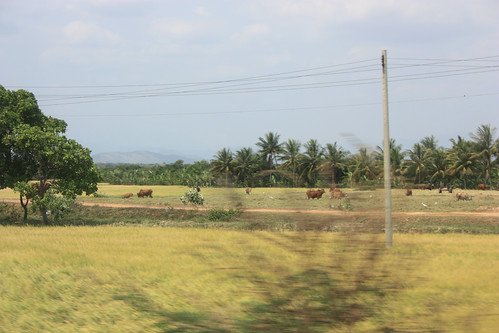 Then we drove and drove and drove and drove. The driver eventually stopped for lunch in a rest stop since we were all munching on food in the back of the van. The thing was though we were full by the time we stopped so we made him eat while we walked around. A visit to the toilet was in order but this time we only had squats to deal with – something I’m getting better at. When I came out an old lady waved at me to pay so I put some money in the box. No one else had to pay from our group or any Vietnamese people so I felt a bit put out but whatever. At the rest stop there were a bunch of chickens scratching around as well as some huge bunnies in a cage and a large lizard (in a different cage of course). Hema the Canadian bought some dried banana chips which were really yum because they were flavoured with ginger and sugar. After the driver had lunch he changed the radiator water draining it in to a bottle of soft drink and replacing with something he bought from the petrol station. Did it all in a nicely pressed shirt, black pants and leather shoes, without getting dirty. I was so impressed. 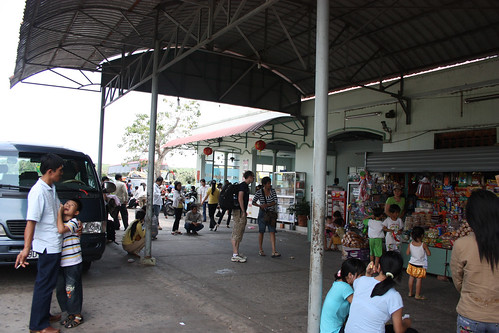 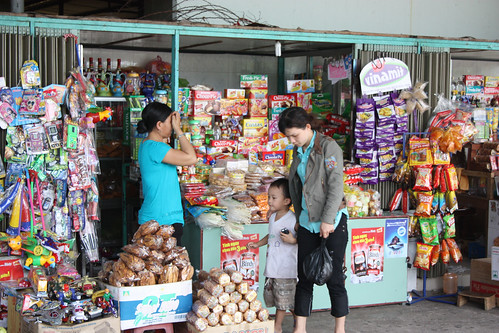 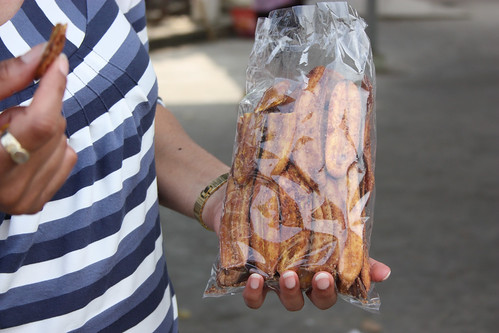 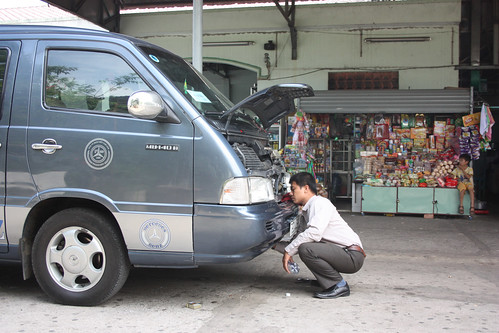 A hell of a lot more driving then it was another rest stop, this time a very busy one. People had no respect for the toilet lineup and just wandered in, so I just manouvered past them. People don’t seem to care about who was there first here. I guess in a country of 85 mil you have to forge your own path. Rob the Brit ended up buying a green safari hat in the stall and got chewing gum as change since the lady didn’t have any small change. He said it was common in Asia but his wife said this was the first she’d heard about it. 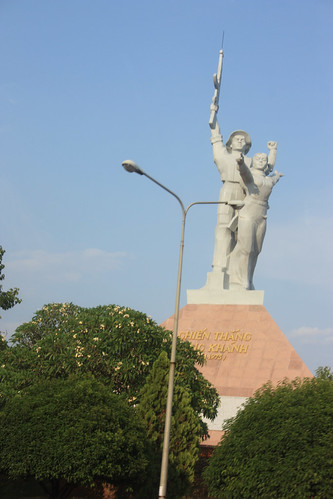 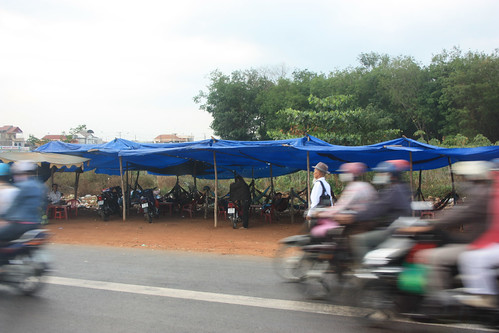 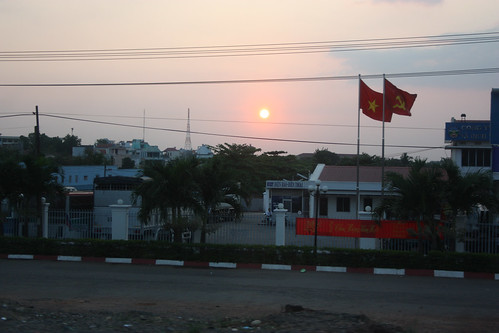 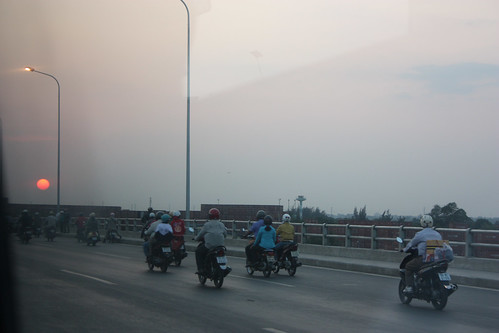 As we neared Saigon the traffic became brutal and we often crawled our way along. The driver was great though and I felt very safe with him. By the time we got to our hotel I was glad we weren’t continuing on to the Mekong Delta. I was tired, starving and had a nose that wouldn’t stop running. We gave ourselves 30 mins to get ready for dinner and then met in the lobby. 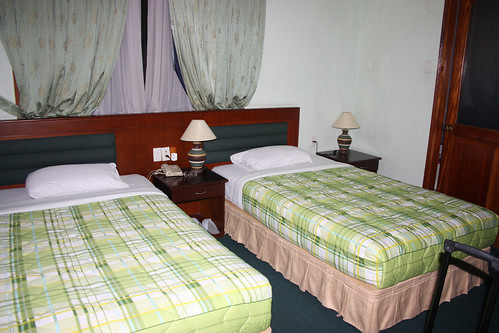 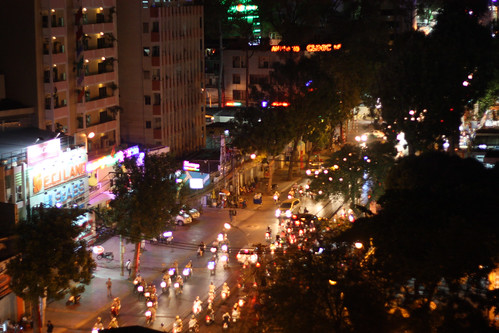 Everyone except me wore glasses and Saigon is apparently really cheap to get prescription ones, so we stopped in st a couple on the way to dinner. This turned in to a 45 minute stop that was brutal on me, Hema and Mark who weren’t getting any. My chest infection was now a cold so I was dealing with a sinus headache. Luckily the shop gave us seats to wait. 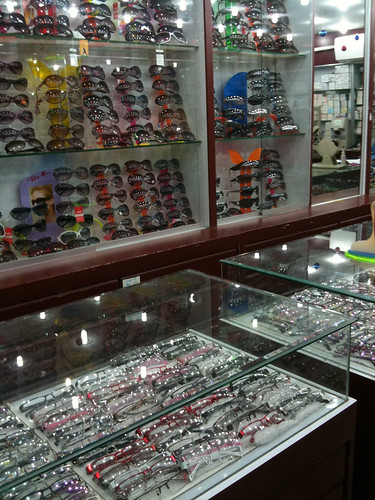 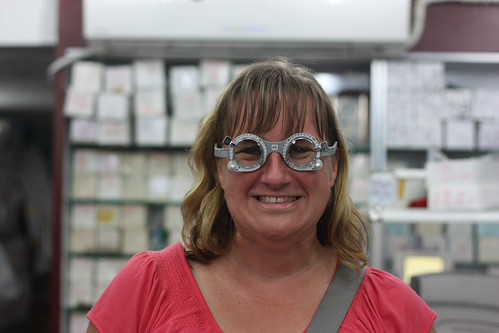 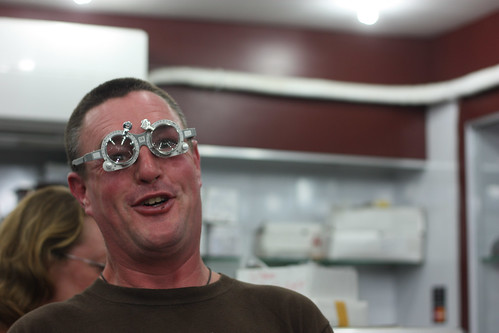 For dinner we walked to a restaurant near the markets but it either wasn’t there any more or was shut, so we ate in a restaurant in the market. Reminded me of the one we ate in in Hong Kong. The guys were gutting the fishes right there and then as they pulled them live from the water tanks. I just had fresh spring rolls (baby hamsters Cheryl!) and cantonese fried rice. I was most impressed with my lemon drink though – it was the lemon, sugar and water ones like I had in my first ever Vietnamese restaurant. After eating the others wandered the night market while Hema, Mark and I went back to the hotel exhausted from such a long day.i was so tired I didn’t care that all I could hear in my room was some loud club music from downstairs. Hope the Mekong Delta is worth the effort. 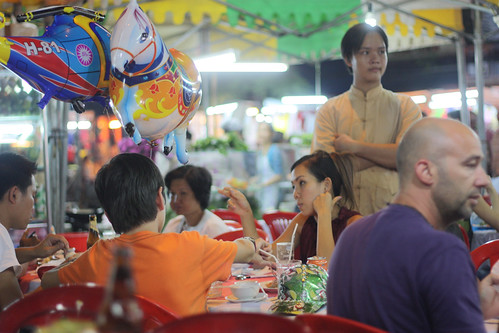 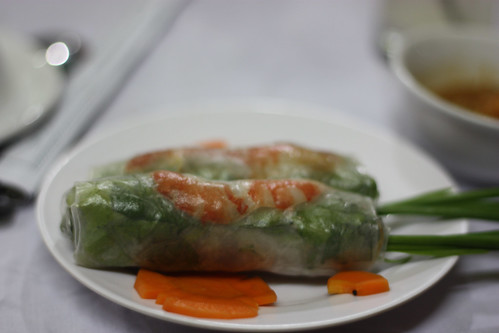 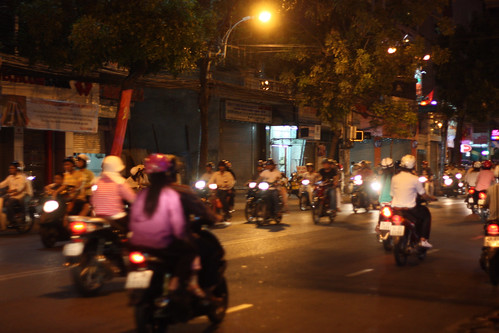